Share All sharing options for: Newspaper print ad revenue has declined 73% in 15 years

Mark J. Perry from the American Enterprise Institute gives us this jaw-dropping chart showing the total collapse in newspaper advertising revenue since 2000: 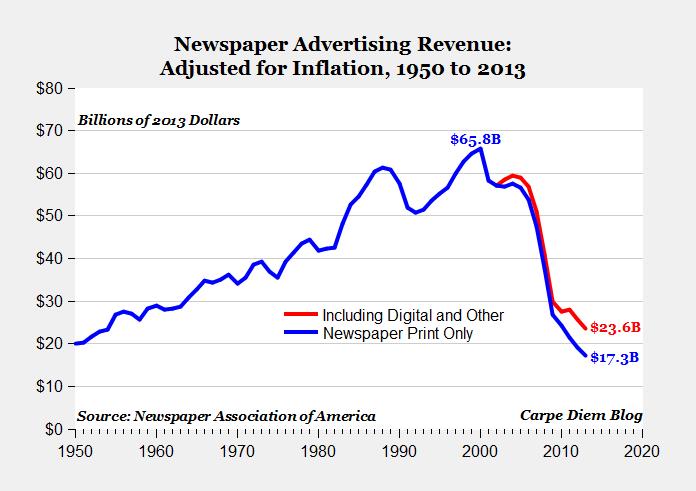 Back in 1950 the overall economy was only about one seventh the size it is today, so even saying that print ad revenue is below its 1950 level is an understatement. Of course the $6.6 billion in digital ad revenue is nothing to sneeze at, but it doesn't even come close to making it up the gap.

It's worth saying that's not because nobody spends money on digital advertising. It's because the digital world has opened up whole new kinds of advertising platforms — most of all Google and Facebook but also digital native media companies. And at the same time, the world simply has less need for advertising in many core product markets. If a clothing store I shop at regularly wants to let me know about a sale, they will email me directly. Craigslist has greatly reduced the need for classified advertising.

The good news in all of this is that we're developing a much more informationally efficient economy — one that's much better at connecting consumers with products they want without incurring tons of marketing overhead. The bad news is that this trend appears to be completely destroying the financial basis for coverage of state and local government.