If you don't care even slightly about how Paul Ryan's policy ideas will impact poor people then I really recommend that you read McKay Coppin's new long Buzzfeed feature article about Paul Ryan's newfound interest in poverty issues. Reporting? Check. Color? Check. Political context? Check. Great writing? Check. This piece has it all. Except for even a teeny tiny shred of insight into how Paul Ryan's policy ideas will impact poor people. The article's subhead says that Ryan is "trying to challenge the notion that his party is out of touch with poor people the old-fashioned way: by talking to some." Perhaps one reason is that the more newfangled way of showing in touchness with the economically struggling — by advancing a policy agenda that would help them in concrete ways — is wildly out of step with Ryan's basic ideology.

Increases the after-tax income of the rich, while raising taxes on the working and middle class

Conveniently, when he's not being the subject of profiles, Paul Ryan actually offers fairly extensive documentation of his public policy views.

All politicians do this to some extent, but Ryan is unusual in that as Chair of the House Budget Committee he really does put the whole thing down on paper on an annual basis. His Fiscal Year 2015 budget came out earlier this spring, and we at Vox were able to glean quite a bit about Ryan's policy views from reading it. 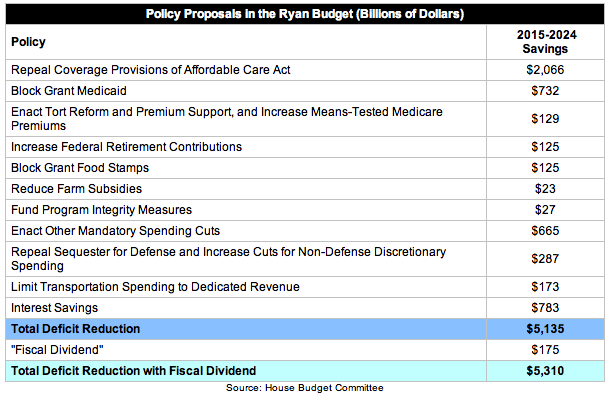 At the same time as it cuts spending on the poor, Ryan's budget also has tax provisions. Specifically he calls for $5.7 trillion worth of tax rate cuts. That money, he says, will be made up through unspecified reductions to tax credits and tax deductions. When the Tax Policy Center analyzed the distributive implications of this kind of plan, they found that it increases the after-tax income of the rich while raising taxes on the working- and middle-class.

I admit that this way of looking at things is a bit less colorful than following Ryan around a bunch of visits to low-income neighborhoods. But to the extent that you want to know how an increase in political power for Ryan and his allies is likely to impact the lives of American citizens, it's worth looking at these things. His big job in politics is to write budgets. And his big budget idea is that rich people should pay lower taxes, middle class and working class people should pay more taxes, and poor people should get less food, medicine, and college tuition.