Share All sharing options for: Your atheism isn't going to keep your kids from believing in God

Kids abandoning their parents' faith is a pretty well-trodden trope in pop culture, but two shows are turning the tables a bit. This season, both The Good Wife and The Americans feature teenage daughters of atheist parents who've converted to Christianity.

The Good Wife's Grace Florrick (Makenzie Vega) has been slowly growing more devout since season two and was baptized in season three. Her atheist mother Alicia (Julianna Margulies) has been generally accepting of the conversion, but tension has developed in the wake of a death close to Alicia, due to Grace's repeated insistence that the deceased is in heaven. Meanwhile, The Americans' Elizabeth and Philip Jennings (Keri Russell and Matthew Rhys), being undercover Soviet spies, have no faith, and are furious when their daughter Paige (Holly Taylor) joins a church.

It makes for decent enough drama, but is this actually common? Do kids raised without religion actively seek it out and convert all that often? As it turns out, yes. The most recent data on this that I've come across comes from Pew's 2008 Religious Landscape Survey, which finds that only 46 percent of people who are raised religiously unaffiliated (which includes atheists, agnostics, and those who say they're "nothing in particular") remain unaffiliated as adults. By contrast, 68 percent of Catholics and 52 percent of Protestant stay with their childhood religion, and only 14 percent and 13 percent (respectively) stop subscribing to any religion at all: 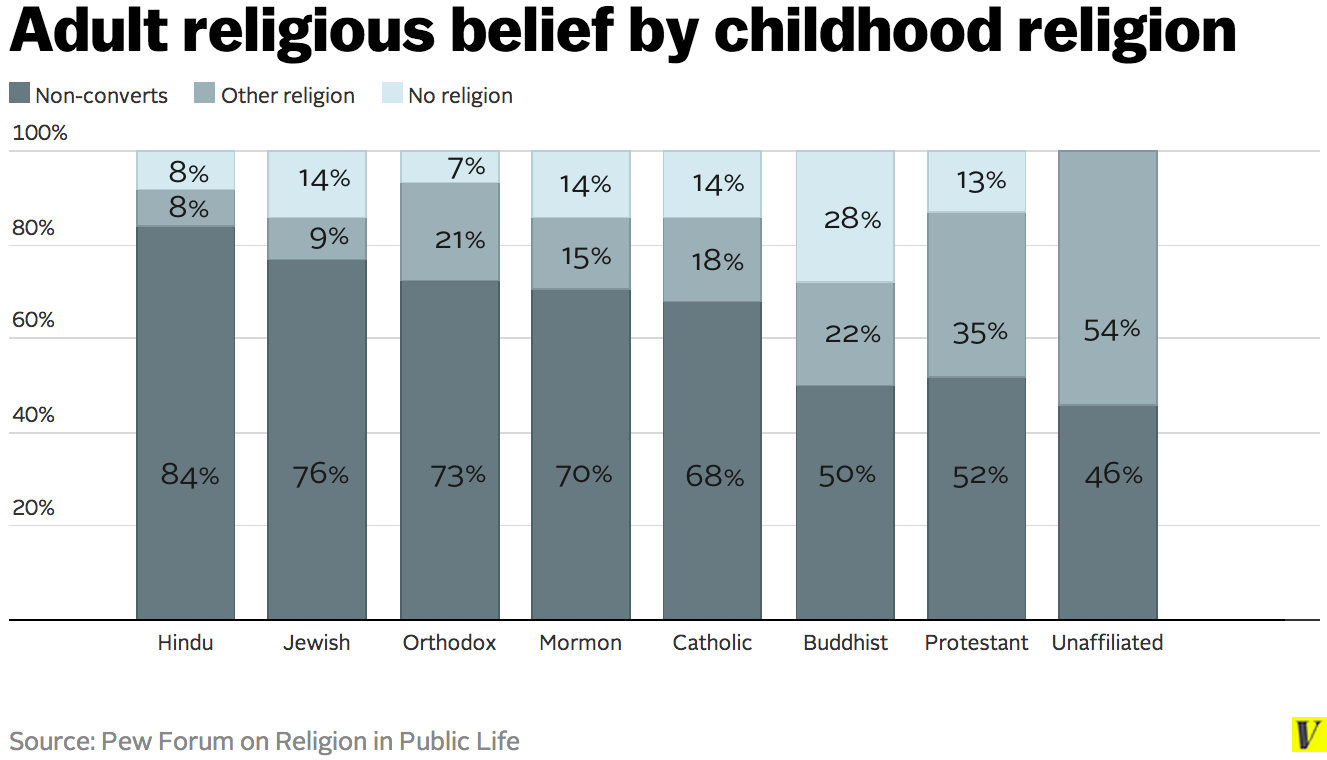 That's not a perfect measure, given that a subset of the unaffiliated population (5.8 of the public, compared to 16.1 percent for all unaffiliateds) identifies as religious in some sense, but a study from Georgetown's Mark Gray using the same data found that only 30 percent of people explicitly raised as atheists (excluding other unaffiliateds) remain so as adults: 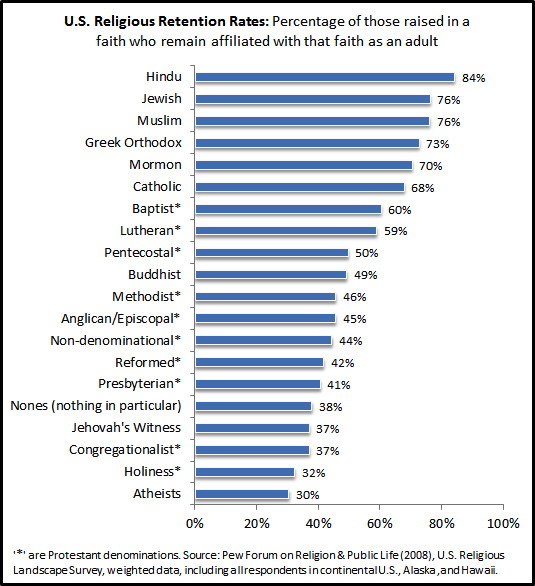 That's not an ideal measure either, given that it excludes agnostics (2.4 percent of the population, compared to 1.6 percent for atheists) and secular unaffiliated people who do not identify as atheists or agnostics (6.3 percent); Gray does say that about 20 percent of kids raised as atheists wind up agnostic or otherwise unaffiliated, in addition to the 30 percent staying atheists. What's more, there just weren't that many survey respondents who grew up as atheists (432, compared to over 35,000 for the survey as a whole). There were enough for a reasonable margin of error, but obviously a bigger sample would be preferable. But in any case, the data does suggest that religion has a somewhat easier time transmitting across generations than irreligion does.

It's not all bad news for secular folk, though. If you compare the childhood religions of respondents to the survey to their beliefs as adults, secularism is gaining a lot of ground, with agnosticism growing more than eightfold, and atheism tripling. By contrast, Protestantism and especially Catholicism lose followers as members grow up. Their retention rates are higher, but there are so many more of them that when even a small minority of their followers become secular, the unaffiliated's ranks swell considerably: 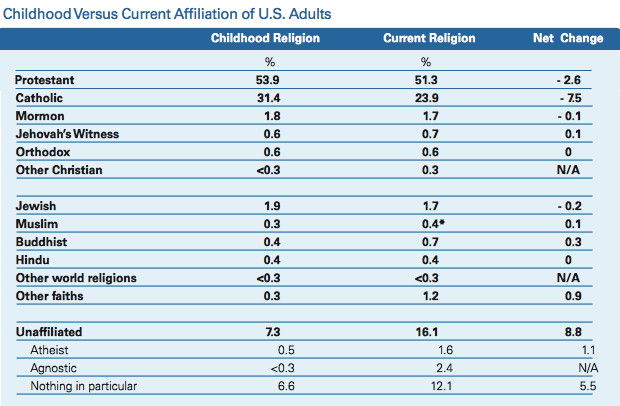 Since atheism/agnosticism/etc. are gaining ground, that'll mean more parents in the next generation raising their kids without any religion, who'll grow up in a world where it's much more common and acceptable to not believe in God. So it seems plausible that retention rates might tick up when Millennials have adult children.

Update: Daniel Cox at the Public Religion Research Institute points out that PRRI's American Values Survey has data on this question from 2012, four years after the Pew data. There, the retention rate for unaffiliated people is 53 percent — a bit higher than in the Pew Study, but not by much, and well below the rates for Catholics (63 percent), black Protestants (84 percent) and white evangelicals (71 percent). White mainline Protestants had a similarly low retention rate at 56 percent.

The 2012 General Social Survey put the number for unaffiliateds even higher, at 61 percent, only a bit behind Catholics at 66 percent. Our thanks to Cox for pointing out the more recent data.