Share All sharing options for: The lesson of Bundy and Sterling — your racist friend isn't okay anymore

To those familiar with his checkered history, Sterling's racist outburst was no surprise. The surprise was what came next. Over the course of the day,nearly every relevant sports media outlet came out with a powerful statement not just condemning Sterling's racism but condemning his fellow NBA owners for their past inaction and insisting that something had to be done. Already, the NBA has announced that Sterling won't be attending tonight's playoff game, and that an investigation into his comments is ongoing.

Several years ago when Sterling was in the news for facing millions of dollars in fines on federal housing discrimination charges, his fellow owners doubtless didn't approve of his conduct but had nothing to say on the matter and he faced zero consequences from the league . It of course remains to be seen what exactly the league's ultimate response will be, but at this point it's clear that something will be done. In the modern NBA it's not just that racism isn't okay, but standing silently aside while racism happens isn't okay either.

In a Facebook post, Bundy's daughter slammed conservatives like Hannity. "What does this have to do with land rights issues?" She asked. Historically speaking, the answer to that question is, to say the least, complicated. But the more immediate answer is simple: by and large, America isn't willing to tolerate a racist friend anymore.

The whole thing brought to my mind what I think is one of the most profound songs about racial politics in America, They Might Be Giants' 1990 "Your Racist Friend":

Of course, some segments of the political right continue to have a rather pathological relationship to questions of race. As the Sterling story broke on Saturday, writers at conservative flagship magazine National Review had nothing much to say about it. Then at around 1:30 AM on Sunday morning, Tim Cavanaugh found an angle. Donald Sterling, he reported, is a Democrat. That turns out to mean that in the early 1990s he made $6,000 worth of total campaign contributions to two Democrats.

Matt Drudge was very excited about this line — throwing in a bonus media bias charge to go with it: 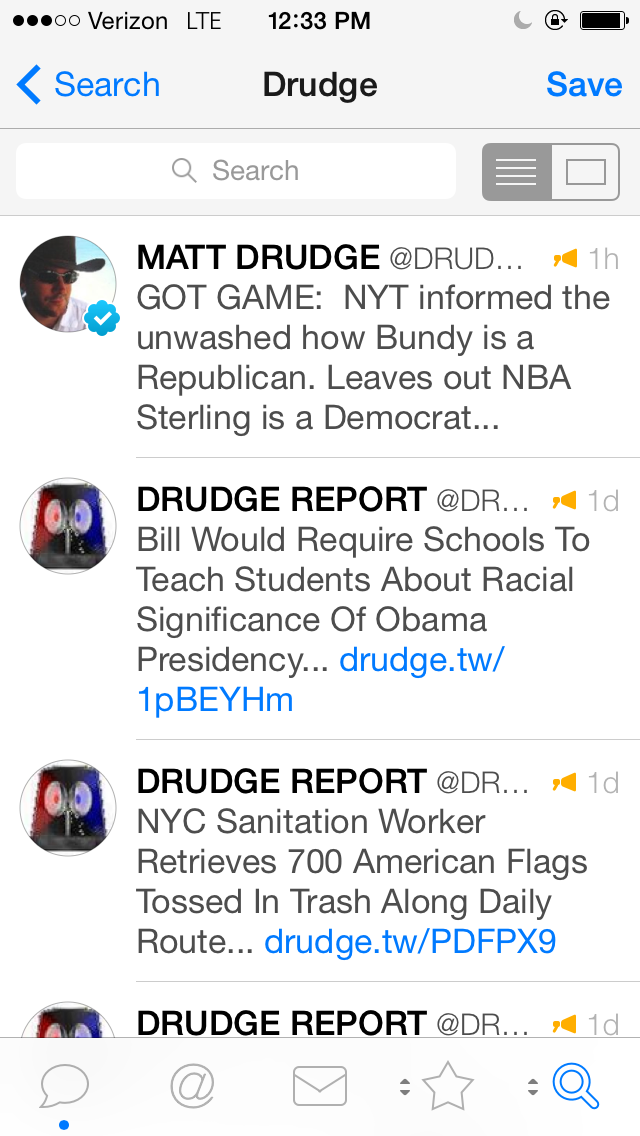 It is difficult to make heads or tails of what Cavanaugh and Drudge are trying to say here. Unlike Bundy, Sterling was not involved in any interesting political controversies before the tape of his racist tirade came out. Nor was the content of his remarks related to any contentious political issues. The politicians Sterling donated to — former Senator Bill Bradley and former Governor Gray Davis — don't hold office and aren't in the news.

But while it's more than a little sad that some people can't manage to get themselves jazzed up about racism-as-such rather than racism-as-partisan-cudgel, in a way it's encouraging that this is the direction spin is going. Rather than saying the right's racist friend down on the ranch was okay, the defense is that Democrats have their own racist friend in Sterling. It's not accurate, per se, but it at least features the right spirit.

It's 2014 and most people can see that the emerging American landscape is the one TMBG called for 25 years ago. Racist friends aren't going to be tolerated anymore. Not in obscure disputes with the Bureau of Land Management and not in the NBA either.