Honolulu is even more expensive than New York or San Francisco

Share All sharing options for: Honolulu is even more expensive than New York or San Francisco

The Midwest is a great place; it has casseroles, amazing state fairs, and just all-around nice people. It's also a cheap place to live, according to new data from the Commerce Department. The department has begun releasing data on something called "regional price parity," a figure that shows how high prices in a given place are compared to the rest of the nation.

That data takes into account a variety of goods, like food and housing, and shows that the Midwest and the South are both areas where prices are lower than in the rest of the country. Meanwhile, the Northeast is a more expensive place to live.

The district of columbia has prices 18.2 percent higher than the national price level.

The tiny District of Columbia it not visible on the below map, but if it were, would be the deepest blue. DC had the highest prices in the nation as of 2012, with a regional price parity score of 118.2. That means its prices were 18.2 percent higher than the national price level in 2012. It is followed by Hawaii (117.2) and New York (115.4). 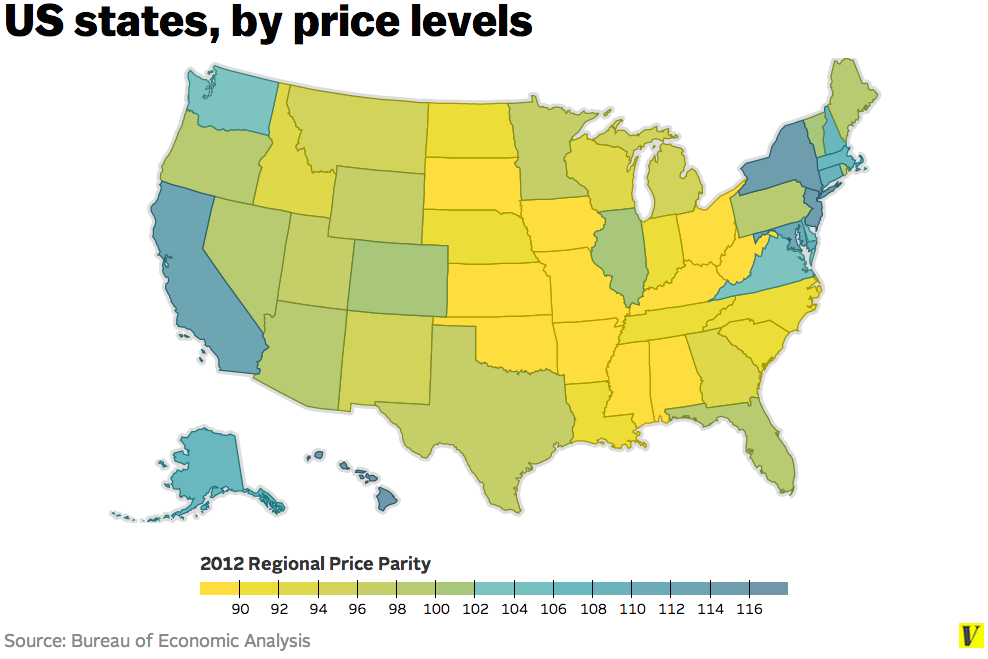 Illinois (100.6) and Vermont (100.9) were the closest to the national price level. Meanwhile, the South and Midwest came in the lowest. The cheapest state, Mississippi, came in with a regional price parity score of 86.4.

urbanization can make for much higher prices.

What makes a place more or less expensive to live? Lots of factors play into it, but one is urbanization. Cities, with their tons of jobs, draw in lots of people, particularly educated workers, who can command higher salaries, which can push prices up.

People also move to cities because there are amenities there they can't get anywhere else. Aside from jobs, cities also have amenities like entertainment and easy ways to get around — in some large cities, public transit allows residents to live car-free.

Lots of people plus limited space also means higher housing prices. Silicon Valley's fantastically expensive housing market is one current example of high demand driving prices up. In some cities, regulation holds supply down, as Vox's Matt Yglesias wrote last week, and helps boost housing prices ever higher. Height limits on buildings in Washington, DC, are one example of this. Food and daycare can also be way more expensive in cities than in rural areas, not to mention exorbitant parking costs.

That means it's not terribly surprising that the District of Columbia (which is all-urban) comes in at the top.

Geography can also play a part. Hawaii tends to have higher food prices than other states, for example, because so much of the food Hawaiians consume has to be shipped across the ocean. In addition, some have called the amount of money people are willing to pay to live in Hawaii "the price of paradise" — a book of that title penned 20 years ago discussed this problem, and the state has remained expensive since then. 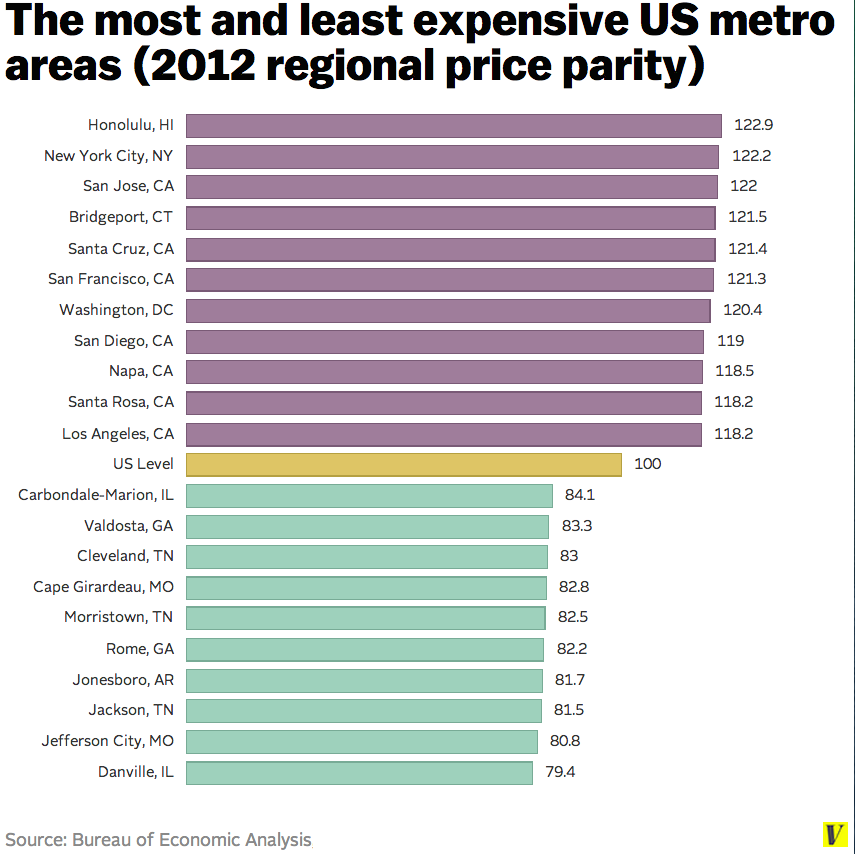 These price levels are for metro areas, meaning they take into account surrounding suburbs; the New York area, for example, takes in parts of New Jersey and Pennsylvania, and the DC area includes parts of Maryland, Virginia, and West Virginia. Altogether, cities are more expensive than the rest of the nation; the nonmetropolitan portion of the US as a whole comes in at 87.9.

Corrected. Bridgeport's state was corrected in the second chart.