Saline is one of the most basic and common items used in modern medicine. It's an incredibly simple solution that has two ingredients: water and salt.

This makes it all the more baffling that, since the start of this year, America's doctors have been fighting an infuriating IV saline shortage.

Cancer centers, which often administer saline administering other IV therapies, are keeping strict inventories of how many bags they have on site. Things got so bad that, in late March, the Obama administration began importing additional saline from Norway. We are literally flying salt water thousands of miles across an ocean, because we can't make enough in the United States. Here's why.

1) Drug shortages are a big problem, especially for injectable generics like saline

Drug shortages have become increasingly problematic in recent years, rising steadily from 2005 through 2011, although dropping off in 2012. 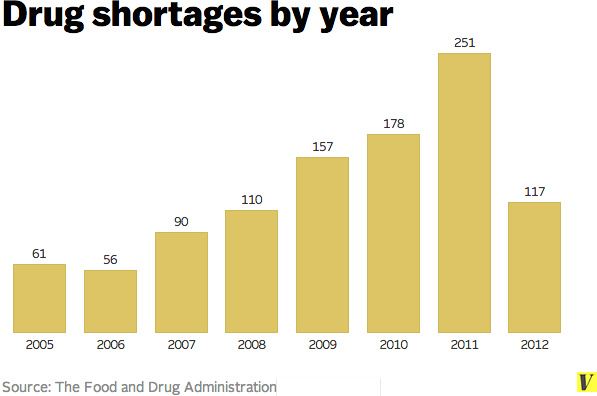 About four out of every five drug shortages are among generic versions of drugs that get injected, a 2011 report found.

2) There's only a handful of American companies making saline

The drugs most likely to have shortages are also those with the fewest manufacturers. About half of the injectable drugs facing shortages are made by two or fewer companies.

This is true for saline, which only a handful of American companies currently manufacturer, largely Baxter and Hospira. This means that, if one company has a hiccup on its manufacturing process (like when Baxter had to recall some of its saline last fall) can ripple quickly throughout the medical system.

When the FDA looked at why drugs like saline were running short, they found that a lack of capacity to produce more was the biggest cause. 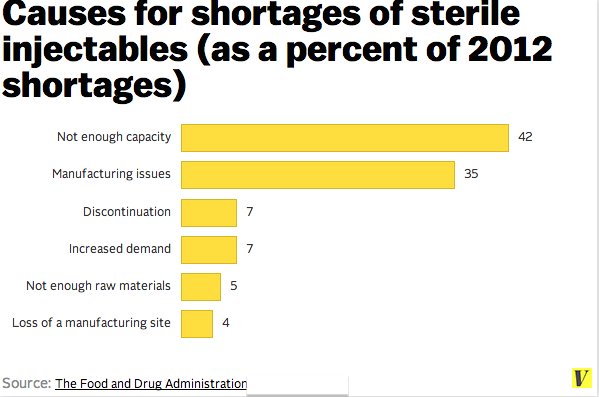 "The production schedules are so tight and so tightly forecasted, they can't easily manufacture more," Fox says.

Which explains why, even in the midst of a shortage, you don't see tons of enterprising businessmen rushing to build saline factories.

"What normally should happen when there's demand, there's a market to be made and manufacturers come in," says Ted Okon, executive director of the Community Oncology Alliance. "But you'd have to run your production lines like crazy to make any kind of a margin on these products. And that's when quality programs crop up."

4) Manufacturers must produce saline in a sterile environment

Another challenge specific to saline: it has to be manufactured in a sterile environment, so it can — eventually — be safely injected into a patient's veins. In that way, saline can actually be more difficult to manufacture than pills.

5) Saline is difficult to ship

The Food and Drug Administration announced on March 28 it would begin importing additional saline from Norway "while it is needed to address this critical shortage that directly impacts patients." But even this isn't a great solution: saline is typically stored in one liter bags, which are bulky and expensive to transport internationally.

"The thing that's hard with saline is that a typical bag is one liter, about the size of a loaf of bread. They're big and heavy, and that's one of the problems," Fox says. "You can't get very much on the plane. That's why the majority of these injectables are manufactured in the United States even when you hear a lot about drug companies outsourcing to other countries."