It takes more than hard work to achieve the American dream

Share All sharing options for: It takes more than hard work to achieve the American dream

The American Dream is a grand, amorphous, old idea that for most Americans encompasses at least a few lofty goals: a house, an education, a good job, maybe a spouse and kids.

How people fall off the path to the American Dream 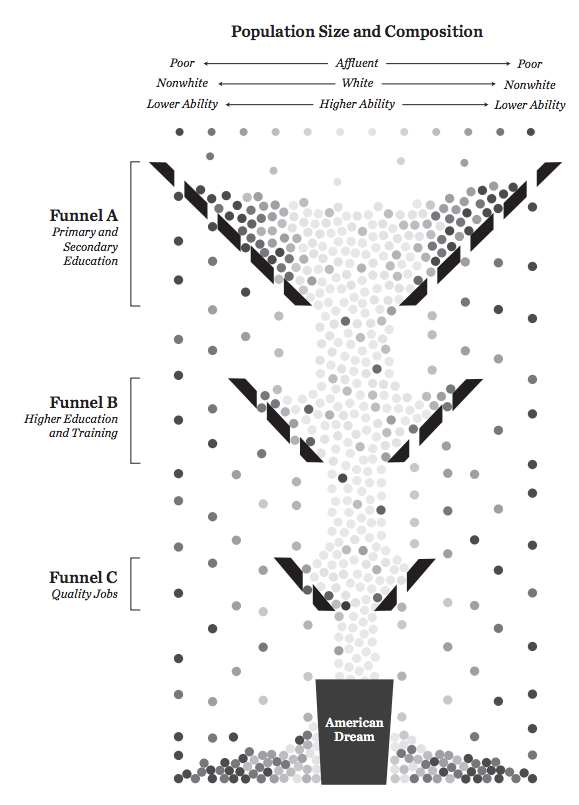 What authors Mark Robert Rank, Thomas Hirschl, and Kirk Foster, are saying is that achieving the American Dream (which they define as having the freedom to pursue one's passions, economic security, and optimism that a person will see progress in her and her children's lives) is a multi-step process, and that even getting from one step to the next is far easier for some people than others.

Why some people are funneled to the middle

being smart, white, and wealthy make it all the easier to be funneled into the american dream.

Being smart, white, and coming from a wealthy family may not guarantee a person will achieve the American Dream, but all of those things can help by putting a person at the center of the funnels, the authors write. Falling right through all of those funnels — good primary schooling, getting a higher education, and finding a good job — makes it all the easier to get to the end goal.

Being lower-skilled or growing up poorer, meanwhile, starts a person out at a disadvantage. It means more distance to travel to get to the center of the funnel, meaning more obstacles to be overcome. So having to work harder to even graduate can keep a person out of the middle. And Americans who grow up poor, for example, have a tough time of climbing the ladder — much harder than their peers in other countries. Likewise, SAT scores tend to be higher for kids from higher-income families.

Race and ethnicity are also tied to economic well-being, the authors write. Nonwhites are more likely to experience poverty than whites, the authors note, as well as to experience hurdles like residential discrimination. That said, it's important to note that different racial and ethnic groups have different economic experiences — Asians, for example, tend to be more equal to whites in this diagram, the authors notes, as they tend to have a much lower poverty rate than blacks or Hispanics, as well as a lower unemployment rate.

Starting out on the edges also makes it easier to fall out through one of the gaps in the sides via a random event. A massive medical bill or having to care for a relative, for example, can be all it takes to pull someone out of school and out of the flow.

hard work can boost a person's chances of attaining the american dream, but some people have to pull much harder on their bootstraps.

Hard work can boost a person's chances, of course, but people who start on the outskirts have to pull a lot harder on their bootstraps to get to the same place as the kids in the middle.

Updated Apr. 28, 2014: This post was updated to reflect how the authors classified Asians in the diagram.