The author of Game of Thrones compared his characters to drones

Share All sharing options for: The author of Game of Thrones compared his characters to drones

What's worse — the bloody beheadings of Game of Thrones, or today's death by drone-fired missile? George R.R. Martin, the author of the books adapted by the HBO show, seems to think it's latter. But Martin, justified though his concern for the morality of drone warfare may be, repeats some common misperceptions about how drones work and, more fundamentally, how technology changes war.

The problem in both cases is the policy of people in power, not the weapons they use to pursue it

Rolling Stone asked Martin about how all of the on-screen killing affects the psychology of the killers — can you take a life without irrevocably altering your own? It's a major theme in the show, particularly in the story arc of Arya Stark, a noble-born girl forced to take up violence to stay alive after her father's execution. Martin's answer compared medieval violence to drones, and somewhat favorably at that:

Taking human life should always be a very serious thing. There's something very close up about the Middle Ages. You're taking a sharp piece of steel and hacking at someone's head, and you're getting spattered with his blood, and you're hearing his screams. In some ways maybe it's more brutal that we've insulated ourselves from that. We're setting up mechanisms where we can kill human beings with drones and missiles where you're sitting at a console and pressing the button. We never have to hear their whimpering, or hear them begging for their mother, or dying in horrible realities around us. I don't know if that's necessarily such a good thing.

Martin is certainly not alone in questioning the implications of drones, and exploring the human impact of war is a major part of his work. As he's said repeatedly, his work is designed to be a criticism of war as a human institution, the base cruelty of characters like Joffrey Baratheon and Ramsay Snow exposing what happens during episodes of organized violence. Still, Martin's own books allow for a lot more nuance around the morality of medieval warfare than he seems to see in its more modern incarnation. The idea that killing in war is somehow better when done with a sword rather than a missile seems to cut against his critique of war itself.

What's really troubling about both the drone program and slaughter on Game of Thrones isn't the technology people are using to kill each other. It's the reasons that they decide to deploy it. On the show, it's mostly a pointless struggle over which royal family gets to wield power. In real life, it's the willingness to kill civiliansto achieve arguably dubious gains against al-Qaeda. The problem in both cases is the policy of people in power, not the weapons they use to pursue it.

If it comes to pass, as humans get physically further away from the people they're killing, that war also becomes more vicious, then Martin may well be right. If we're killing more people as our technology gets better, then it'd be fair to say war is getting more brutal than it was in the medieval era that Game of Thrones is consciously channeling.

While battlefield atrocities still happen, they were actually more brutal when people were killing each other face-to-face

Maybe that will happen. So far, though, there's almost no evidence that distancing the killer from the killed is making war worse. The history of war is, to a certain extent, the history of people developing new ways to kill their enemies from afar. After bows, firearms; after firearms, howitzers; after howitzers, airplanes; after airplanes, drones.

Yet as technology has marched on, there's been less war between the best-armed, most advanced countries — which shows that, at the very least, there's no reason to believe technology is making us much worse. The chart below shows the percentage of years over time in which great powers, such as the US and Russia, have fought wars with other. Around the 16th century, great powers were almost always at war; today, none are. 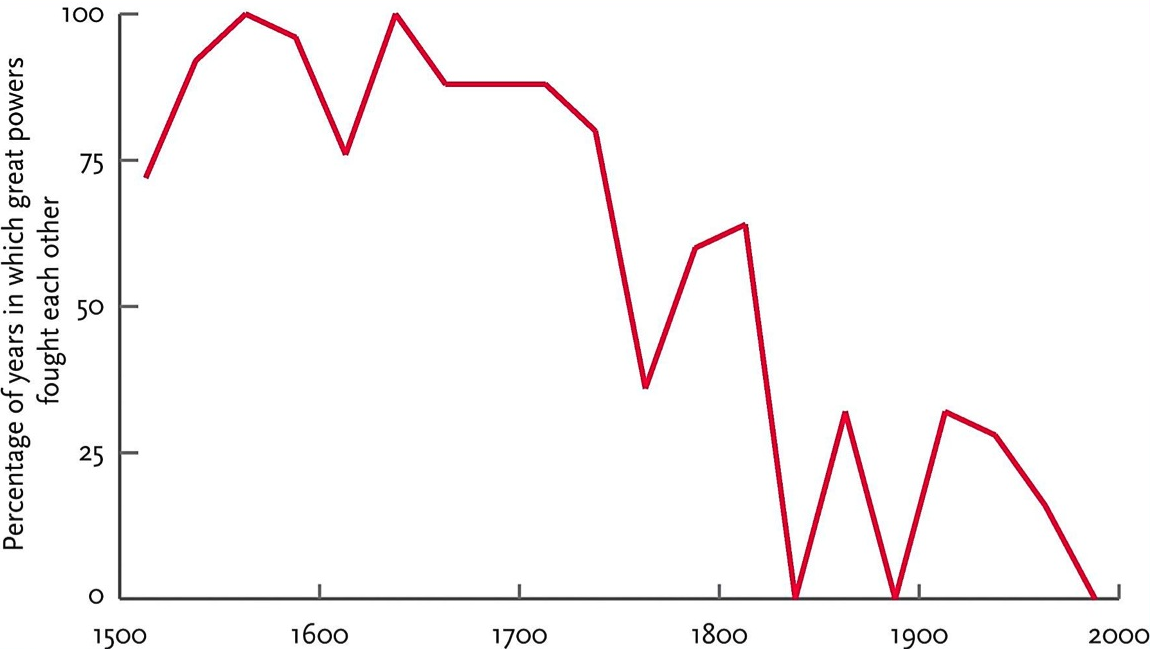 And while atrocities still happen, they were at least as brutal when people were killing each other face-to-face rather than when they were using planes and guns. Each red dot in the chart below depicts one of the hundred worst incidents of mass killing, war, or human-induced famine in recorded history (measured by deaths per capita). That the high dots are spread out over time means that large percentages of population were generally killed at at least no lower, and possibly higher, rates in the long-ago past than in recent history. 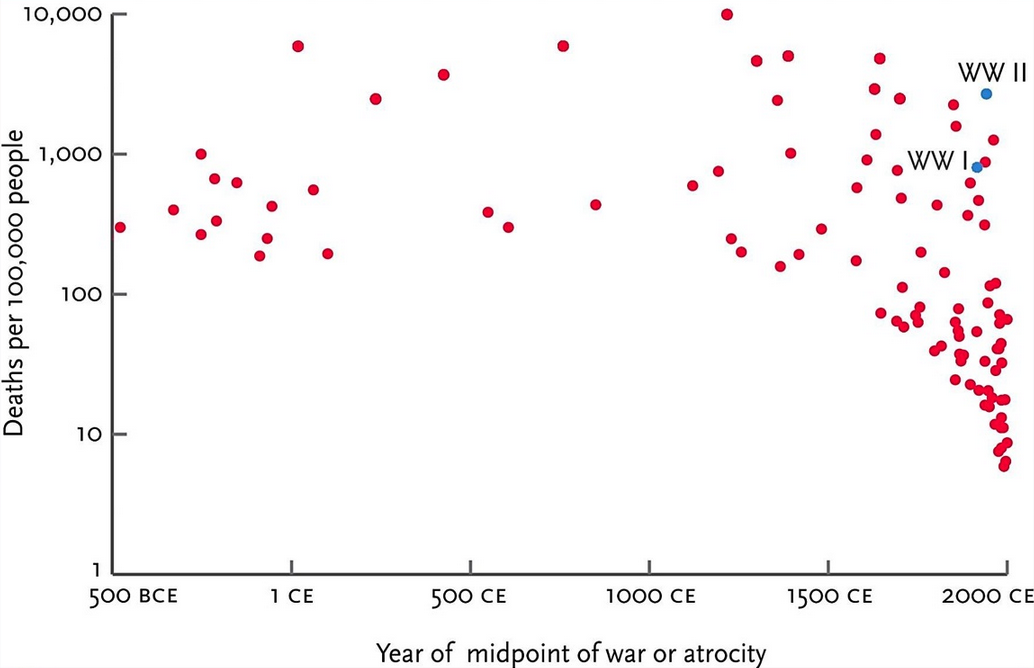 Finally, let's look at the past half-century or so. Since World War II,  planes and missiles — the means of choice for modern militaries looking to kill people at a distance — have gotten infinitely more advanced. Yet as the technology progressed, dramatically fewer people were killed per capita. 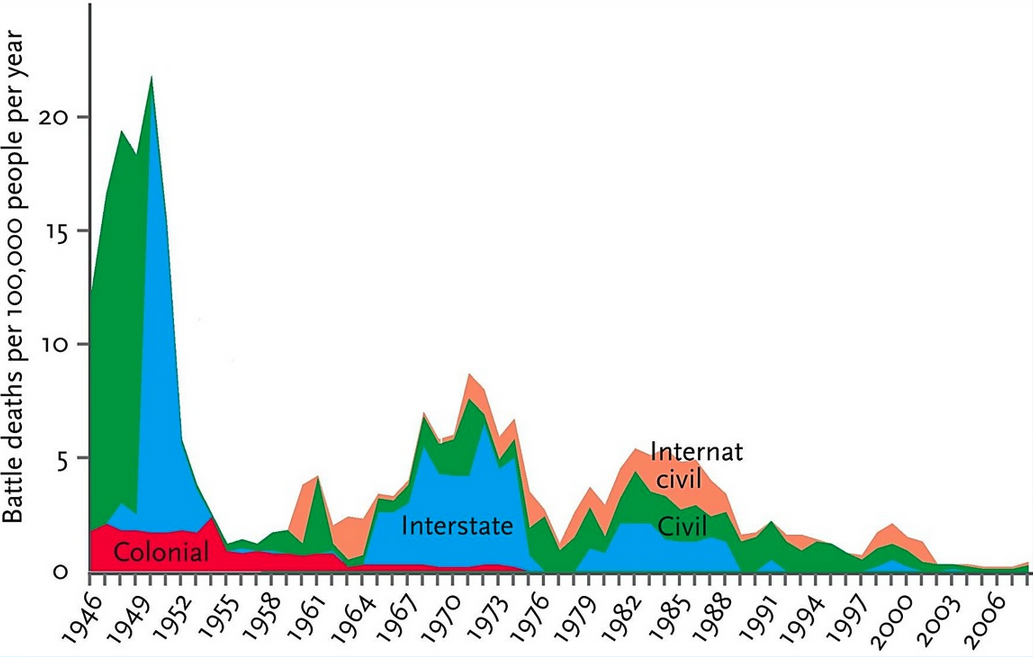 The real world is marred by terrible killing, including death by drone-fired missile. But it's much, much better than the world of Game of Thrones.