Christopher Sibona is studying something truly significant: who gets unfriended on Facebook, and why it happens.

Since 2010, Sibona, a computer science PhD student at the University of Colorado, has conducted a series of studies on unfriending. His admittedly imperfect method: he searches Twitter for people who are talking about unfriending others or getting unfriended, and sends them a link to an online survey.

Over the years, he's gotten a few thousand people to respond. He realizes this might be an imperfect sample of the total Facebook population, but it's still provided some interesting insights about unfriending — such as the conclusion of his latest study:

1. People are most likely to unfriend randos from high school

Sibona's latest study, which included 1,077 respondents, asked people about who they'd most recently unfriended and been unfriended by.

When you combine both types of data, you get a picture of Facebook unfriending overall: 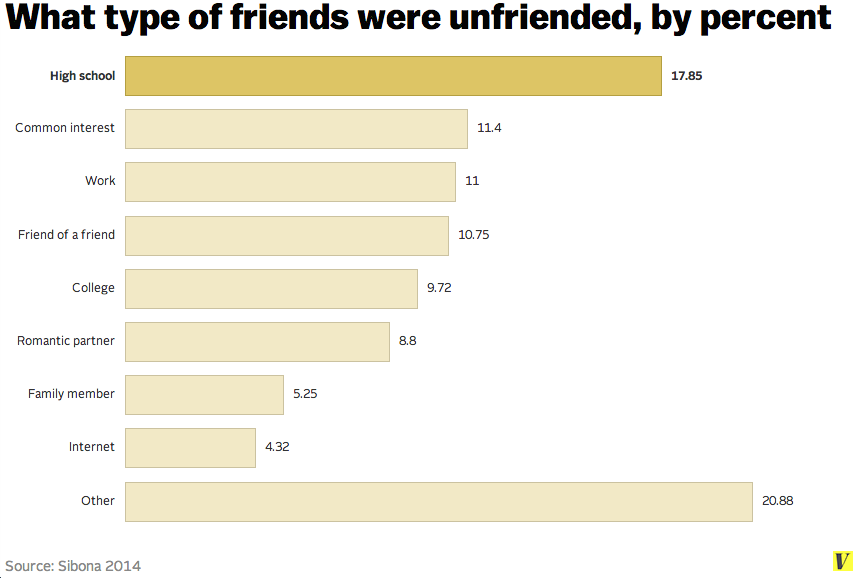 The top category isn't exactly a shock. For many of Facebook's first users, the site launched during high school or soon thereafter, and friending every classmate you knew was considered normal.

For many of Facebook's first users, friending every classmate you knew was normal

As the years have worn on, your ties with many of these people have predictably frayed. If they post something annoying or irrelevant in their news feed (more on that below), the impulse to unfriend is strong.

Most of the other categories aren't particularly remarkable — and their proportions probably mirror the total amount of Facebook friendships out there — but the fact that romantic partners (many of them, presumably, ex-romantic partners) make up 8.8 percent of all people unfriended is a little surprising.

2. If you don't want to be unfriended, avoid politics, pets, and promotions

In a previous study, Sibona asked 1,137 people why they'd recently unfriended other people.

The reasons were split into online (i.e. Facebook) behaviors and offline (i.e. real life) behaviors. People were allowed to pick more than one answer in each — because they might've unfriended someone for multiple reasons — so the numbers add up to more than 100.

The offline reasons weren't all that revelatory (unfriending based on someone's personality, behavior, and because they did something wrong were most common), but the online reasons were a bit more interesting: 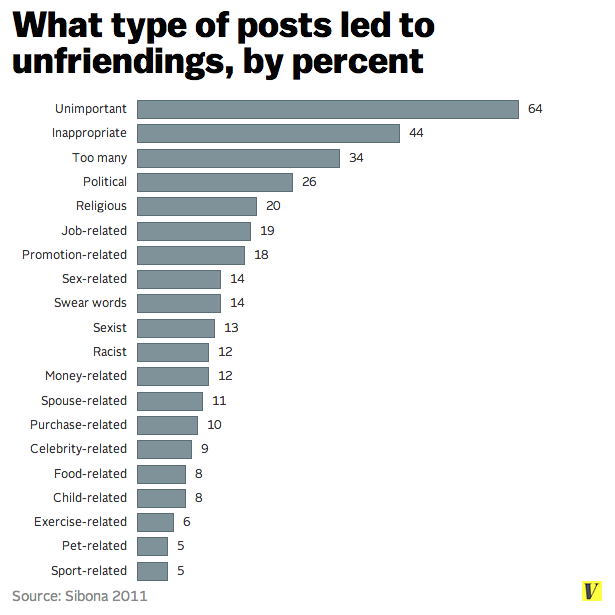 This is basically a litany of all the awful things we all complain about seeing on Facebook. They can be roughly grouped into two categories that correspond to the top two reasons: things that are inappropriate or polarizing (posts about politics, religion, sex, swear words, sexism, and racism) and things that are simply unimportant and annoying (posts about your job or promotion, a meal you ate, something you did with your spouse or partner, and pictures of your kid or dog).

You're free to post about your pet's new haircut, but you're going to lose friends

In other words, you're free to post about how your kid and pet both got new haircuts the same day you got a promotion and ate a new celebrity chef's restaurant, but be warned: you're going to lose some friends.

The fact that we find all this so annoying — and unfriend so often based upon it — tells us a bit about what Facebook's good at, and what it fails at. We like finding out about most of these things when they pertain to close friends or family members. We find these posts utterly annoying when they're about acquaintances.

Facebook has tried to solve this by allowing us to create different lists of friends, but so far, it hasn't really taken off. A better idea is an annual spring cleaning of your friend list, during which you remove everyone you'll probably never see again.

3. The original requester is way more likely to be unfriended

This interesting conclusion also came from Sibona's 2011 study. Some of the respondents didn't remember who'd originally sent the friend request, but for those that did, the numbers were pretty heavily skewed. 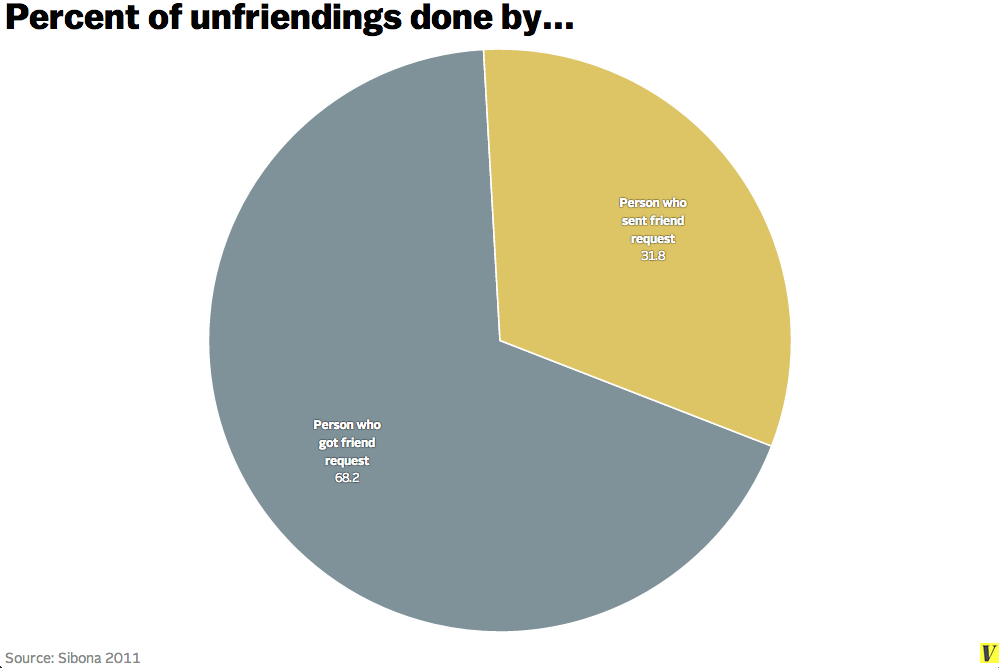 Although you probably don't think of your Facebook friends in terms of who added you versus who you added, this makes sense — in general, the person who sent you a request is likely to be more interested in being friends in the first place.

After you don't see them for years — and they start posting about their faith in god and their terrible day at the office — you're more likely to unfriend them than vice-versa.