Who is Donald Sterling?

Donald Sterling is a wealthy Southern California divorce attorney turned real estate developer who also happens to own the Los Angeles Clippers, currently one of the best teams in the National Basketball Association. He's also a huge racist, who's been caught on tape by TMZ apparently chiding his half-black, half-Latina girlfriend for appearing in Instagram photos with African-Americans and for hanging out with Magic Johnson.

Is this the first time Sterling's been caught being a huge racist?

What did Sterling say to his girlfriend exactly?

It's all here. Knock yourself out:

Is Sterling at least good at managing a basketball team?

Not really. In Sterling's first 30 years owning the team, they had a winning record exactly twice. This season and the two seasons before that, however, the team has been good. An awful lot of that has to do with the Clippers acquisition of point guard Chris Paul who's one of the very best players in the league. The team has other top talent including power forward Blake Griffin, but the Paul acquisition was the key. And it was made possible not so much by trading acumen as by a strange decision by former NBA Commissioner David Stern to veto a different deal that would have sent Paul to the Los Angeles Lakers.

Is the NBA going to do anything about this?

In the past they never have. The very same league that obsessively fines players over behavioral infractions that reflect poorly on the NBA's image has had no problem with Sterling's various misdeeds. On the other hand, those years of indulgence all coincided with the long tenure of David Stern as Commissioner of the NBA. He stepped down in early 2014 in favor of Adam Silver who may have a different attitude. On the other hand, Silver is Stern's longtime deputy so he may not.

Either way, the NBA says it's "investigating."

Can the players' union do anything?

Maybe. The NBA Players' Association President is actually Clippers star Chris Paul. But the NBAPA is in a state of chaos at the moment and lacks a professional executive director, after former executive director Billy Hunter ended up leaving in a blaze of litigation. That's interacting with this story in interesting ways, as Sacramento Mayor (and former NBA player) Kevin Johnson was working with the NBAPA to help them find a new director but he's now taking a lead role in the response to Sterling.

On behalf of the National Basketball Players Association, this is a very serious issue which we will address aggressively. We have asked Mayor Kevin Johnson to expand his responsibilities with the NBPA, to determine our response and our next steps. As players, we owe it to our teams and our fans to keep our focus on our game, the playoffs, and a drive to the Finals.

The reported comments made by Clippers owner Donald Sterling are reprehensible and unacceptable. The National Basketball Players Association must and will play a very active role in determining how this issue is addressed. There needs to be an immediate investigation and if the reports are true, there needs to be strong and swift action taken. I have spoken with NBPA President Chris Paul and will be leading the NBPA in addressing the implications of this serious matter. I will be formally reaching out to the NBA today to determine our next steps. While I originally came on to lead the Executive Director search, this issue requires immediate attention from the Players Association. I will be keeping Chris Paul, the Executive Committee, and all player representatives informed of every step.

Has this situation resulted in any amusing Wikipedia edits? 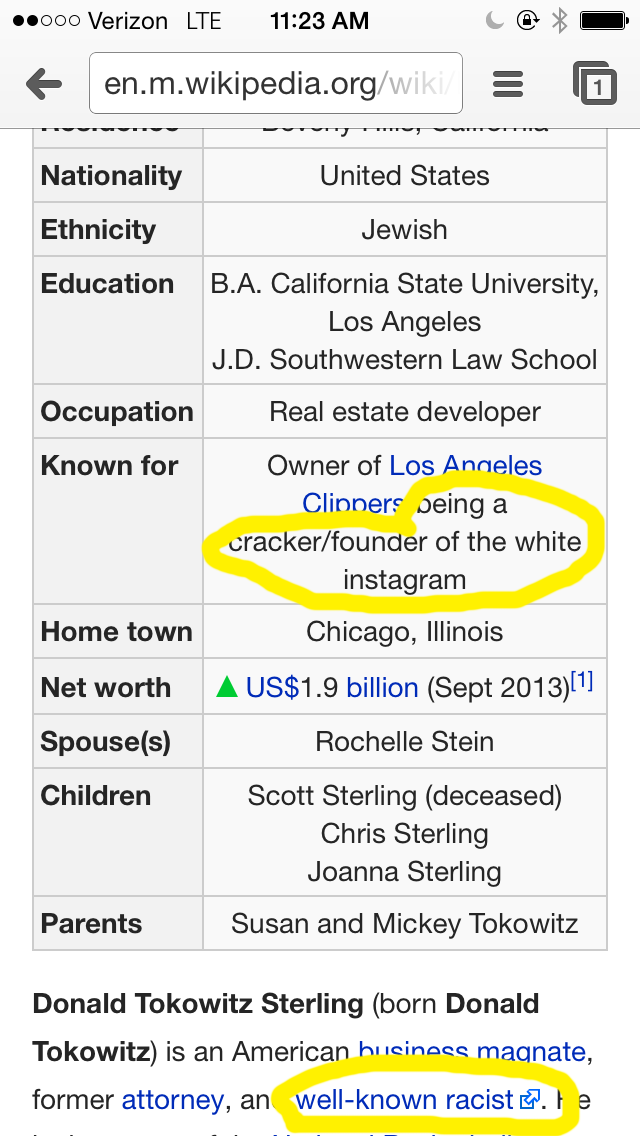 What are people saying about this?

Tom Ziller at SB Nation writes that the league must discipline Sterling. ESPN's J.A. Adande says this tape isn't the worst Sterling's been caught doing, but hopes it may do him in anyway:

My point is this TMZ story isnt even Top 10 in worst things Donald Sterling's said/done. But hey, they got Capone on taxes, so....

Kelly Dwyer at Yahoo Sports says "the NBA has to do something about its biggest problem," Sterling.

When's the next game?

Sunday, April 27, at 3:30 PM Eastern Time the Clippers will play the Golden State Warriors on the road in Oakland in the third game of a closely contested playoff series.

Update: The Clippers have released a statement on behalf of Donald Sterling to TMZ. Here's the statement:

We have heard the tape on TMZ. We do not know if it is legitimate or it has been altered.

We do know that the woman on the tape -- who we believe released it to TMZ -- is the defendant in a lawsuit brought by the Sterling family, alleging that she embezzled more than $1.8 million, who told Mr. Sterling that she would 'get even.'

Mr. Sterling is emphatic that what is reflected on that recording is not consistent with, nor does it reflect his views, beliefs or feelings. It is the antithesis of who he is, what he believes and how he has lived his life.

He feels terrible that such sentiments are being attributed to him and apologizes to anyone who might have been hurt by them.