Share All sharing options for: Why coffee shops love your iced coffee habit

Look alive, people: iced coffee season is here. We think.  A few brave townies in your neck of the woods may have already donned their ratty old boat shoes, and North Face fleeces may already getting stuffed into closets and swapped for cardigans.

With the advent of this wondrous season, we took the time out to give you the fundamental guide to the icy beverage — cost, caffeine content, and everything else you may have wanted to know.

So why are we talking about iced coffee all of a sudden?

Well, there's an unofficial season for it, which begins right after winter (in places that actually experience winter) when there's a renewed and vested interest in the beverage. Only monsters and people you should think twice about trusting drink iced coffee in the winter. "To some degree it's a preference thing, but yeah, we do see that iced coffee sales go up when it's hot outside," Lydia Iannetti from Counter Culture Coffee told us.

Around April, people start getting ready for iced coffee. Or at least they start Googling and reading about it. Here's a Google trend analysis mapping the 2013 searches and news headlines in the US for "iced coffee":

The peak you see in the middle of the chart is July. The small peaks in the beginning of happened in April. And, well, it's almost April now.

You can always make it at home — there are several DIY tricks and recipes online.

You just throw coffee on ice? It can't be that simple.

That's a perfect recipe if you want watered-down coffee. Hot coffee and melting ice cubes aren't a good mix if you like your coffee to keep its integrity. It'll work in a pinch, but there will always be melt if you use that process. 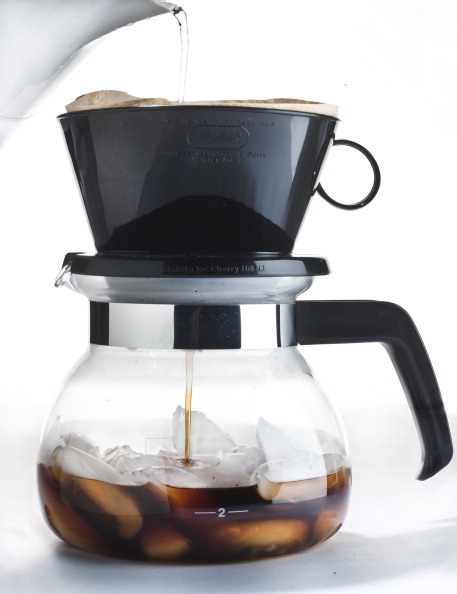 You can also brew your coffee the normal way, wait for it to cool, and then put it in the fridge. Maybe you make it the night before, so you can have iced coffee in the morning. It's an upgrade over the first method. A better way of hot-brewing iced coffee is brewing the coffee hot, directly on the ice and measuring the ice so you take into account the watering down that happens with the melt (a breeze if you're Ina Garten; less so if your kitchen and equipment are more basic). That's called the Japanese method.

The last way to make iced coffee is a popular method called cold-brewing, in which coffee is steeped at a room temperature instead of being brewed hot. It requires patience and planning. The process takes half a day, Imbibe magazine explained, and also creates a different flavor. Sitting around in room-temperature water for 12 hours allows the flavors to mellow out, and the resulting coffee is generally sweeter than if you had hot-brewed it.

Yeah, that's the reason people go with buying it from a coffee shop.

Yes. Iced coffees are, unless your coffee shop owner doesn't really care about profit margins, usually more expensive than the hot stuff, especially considering how much room in the cup the ice takes up. The actual upcharge varies, but usually caps out at around $1 more. The Starbucks closest to the Vox office here in DC charges around 20 cents more for an iced coffee.

Why is iced coffee more expensive than regular coffee?

Remember all the tedious, mind-numbing work you're avoiding by contracting out your iced coffee production? Depending on where you are procuring your coffee, you are paying someone to a) pour the coffee on the ice b) filter the coffee directly onto the ice c) cold-brew the coffee because you can't wait 12 hours d) all, some, or none of the above.

Do coffee shop owners make money off of iced coffee?

A bit, but the increased time and effort required to make it limits the profit gain. New York magazine's Kurt Soller spoke to coffee shop owners in New York City in 2012, and found that making iced coffee costs more than making regular coffee.

Iced coffee requires, well, ice, and some smaller cafes have to rent their ice machines. Iced coffee is generally sold in plastic cups, which generally are more expensive than regular paper coffee cups, and people usually drink it with straws. "My paper costs, which include cups and straws, increase by about 20 percent," Jason Scherr, the owner of Think Coffee, told Soller.

There are also a couple of variables. Iannetti told us these costs really depend on how shops choose to serve their iced coffee. Fancier cups and napkins cost more. But she also said that "most cafe owners consider those costs when setting their beverage prices anyway."

Another thing to consider is the weather. A nice spring day could really help out owners. "When we have a nice spring day early, we bump up about 10 percent from a ‘normal’ day ... maybe an extra $200 to $400," Joe Rubinstein, owner of Joe Coffee, told Soller.

Does iced coffee really cool you down?

Well, it is refreshing. And you can do that thing where you bring the cold cup to your head for instant relief. But there's actually some debate as to the overall cooling effect and effectiveness of cold drinks. There have been studies in which participants drank a cold drink and had their temperature taken (rectally), and a cooling effect registered.

Dr. Ollie Jay from the University of Ottawa’s Thermal Ergonomics Laboratory thinks there is a major flaw with the data procured from these studies. He argues that when you ingest all that cold stuff, it sits in your stomach, which is closer to the rectal thermometer. In short: the temperature drop might be exaggerated and your body might be colder closer to your butt than other parts.

Instead of only measuring temperature at one point in the body, Jay took a more holistic approach. He "monitored metabolic rate and deployed eight thermometers on various parts of the body, plus a rectal thermometer and one inserted through the nose down the esophagus," as the Globe and Mail explained. He wanted to measure the amount of heat entering and leaving the body — and what he concluded was that hot drinks trigger sweat (not unlike how chili pepper ingestion triggers sweat), and sweat cools the body. Cold drinks shut that trigger off. In short: there are situations when a hot drink will trigger sweat, and that sweat will cool you down more effectively than an ice-cold drink.

The main caveat is that your sweat has to evaporate. "If the extra sweat just drips on the ground, then you’re better off drinking a cold drink," Jay told the Globe and Mail.  And if you are in a position where you have puddles of sweat dripping down off of you, you may have more serious problems than deciding what kind of coffee to get.

Does iced coffee have more caffeine?

According to the New York Times, cold-brewed coffees "tend to" have less caffeine. The key word there is "brewed." Temperature often affects a substance's solubility — for example, sugar dissolves faster in hot water than it does in cold water. Caffeine is more soluble in boiling water, and the idea is that more caffeine can be released at higher temperatures.

Peter Giuliano, a barista and director of the Specialty Coffee Symposium, is anti–cold brew on the basis of solubility. He writes on his blog that by the end of a cold brew, "many of the coffee solubles have never made it out of the grounds and into the liquid." That may include caffeine. There are, of course, ways to brew an iced coffee with hot water, which would preserve the caffeine and might render this debate moot.

The last thing you have to take into is the ice. The ice displaces about four ounces of liquid, Soller found. So a 16-ounce iced coffee is more like a 12-ounce hot coffee, which means also means less caffeine.

Is there an official day when people switch over?

That's been debated, too, and the consensus is that there is no definitive day. There's also no rule that says you can't switch back if you regret the error.

I like my coffee hot all the time no matter what. Am I a monster?

No. Maybe. Depends on whom you ask.

Why coffee naps are better than coffee or naps alone