Chipotle’s calorie labels are a lie

Share All sharing options for: Chipotle’s calorie labels are a lie

For anyone counting calories at Chipotle (Hillary Clinton, perhaps?) , the fast casual chain's menu may be among the world's least helpful documents. 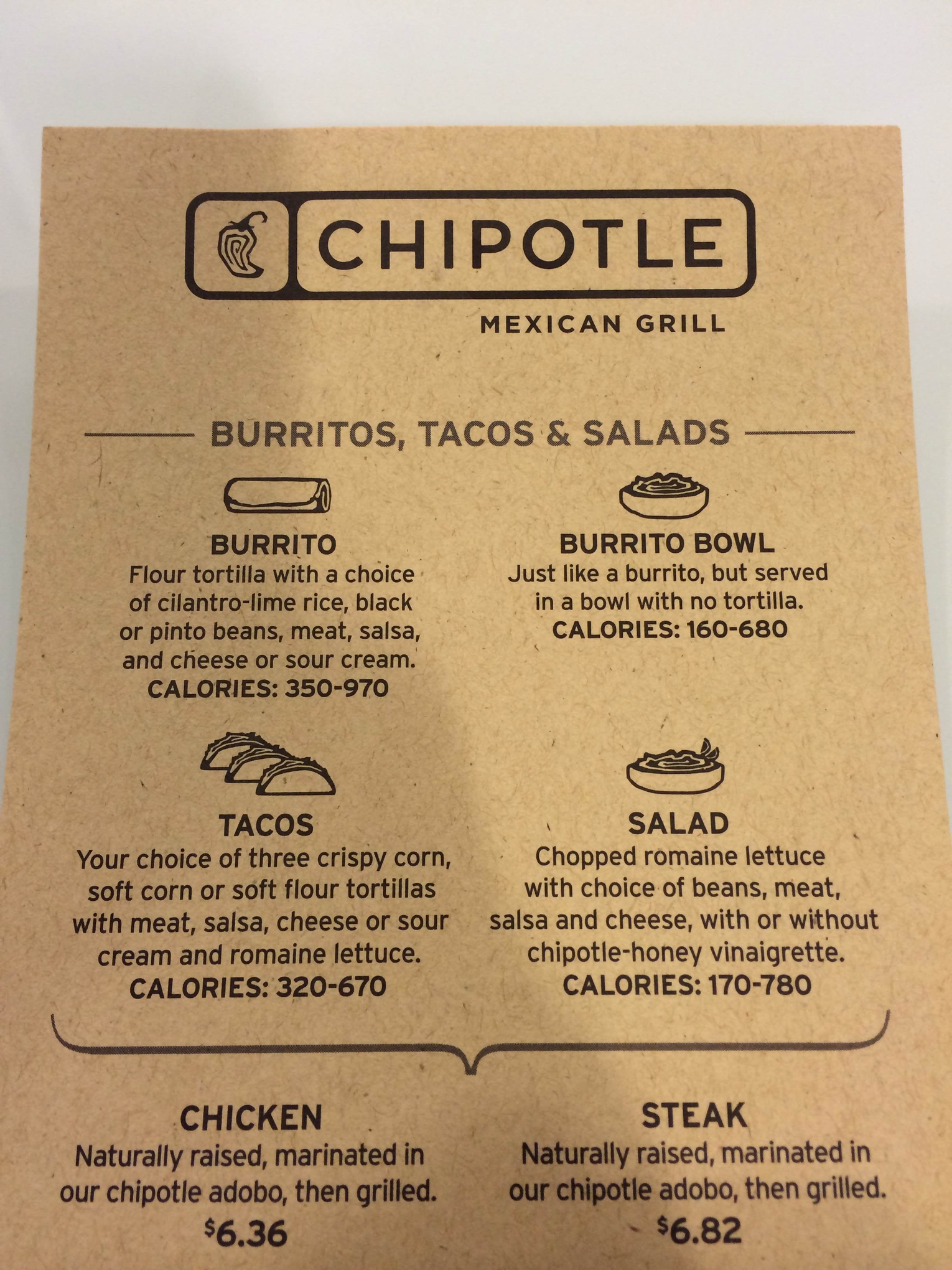 A Chipotle menu picked up on an important, lunch time reporting trip to my local Chipotle (Sarah Kliff/Vox)

The ranges on menu items are so vast that, depending on what your order looks like, a burrito could have 350 or 970 calories – nearly a threefold difference. (Never mind that it is nearly impossible to order the lowest-calorie Chipotle burrito, which consists of a flour tortilla with beans. That is not a burrito! That is a tortilla with beans.)

This is a problem that lots of fast food chains are confronting now that the health care law requires them to post calorie counts on their menus. At establishments where menu items are highly customizable, places like Chipotle or Dominos, coming up with accurate calorie counts is a vexingly difficult task.

Chipotle has settled on providing consumers with a calorie range that is, well, quite large. And when consumers see that range, a recent study in the Journal of Public Health Nutrition finds, they underestimate the calories in their own burrito by 21 percent.

This is better than when eaters don't have any calorie information at all. In that scenario, researchers found that eaters underestimated the calories in their burrito by a full third.

But there's a small tweak that can make Chipotle's calorie labels even more effective: adding examples of how many calories are in the burritos used as the end points of calorie range. This is what that looks like, spelled out (the calorie ranges Chipotle uses appears to have dropped slightly downward since this study was conducted and when I picked up a menu today). 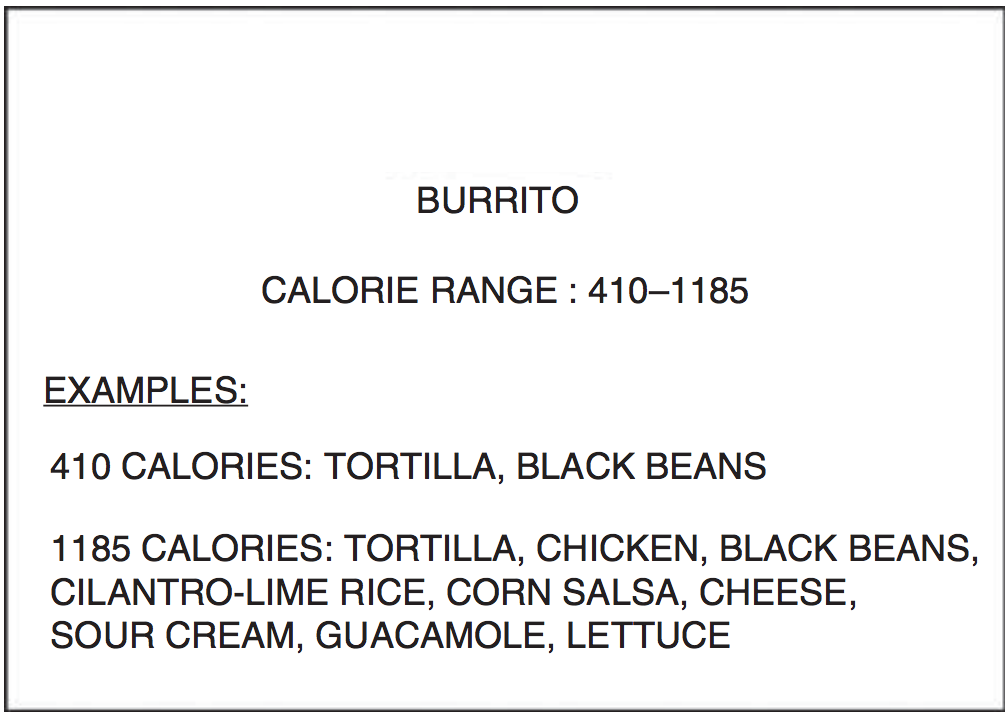 When Chipotle customers were shown a menu with these examples they were able to estimate the calories in their burritos better (although still fell short of the entire amount). 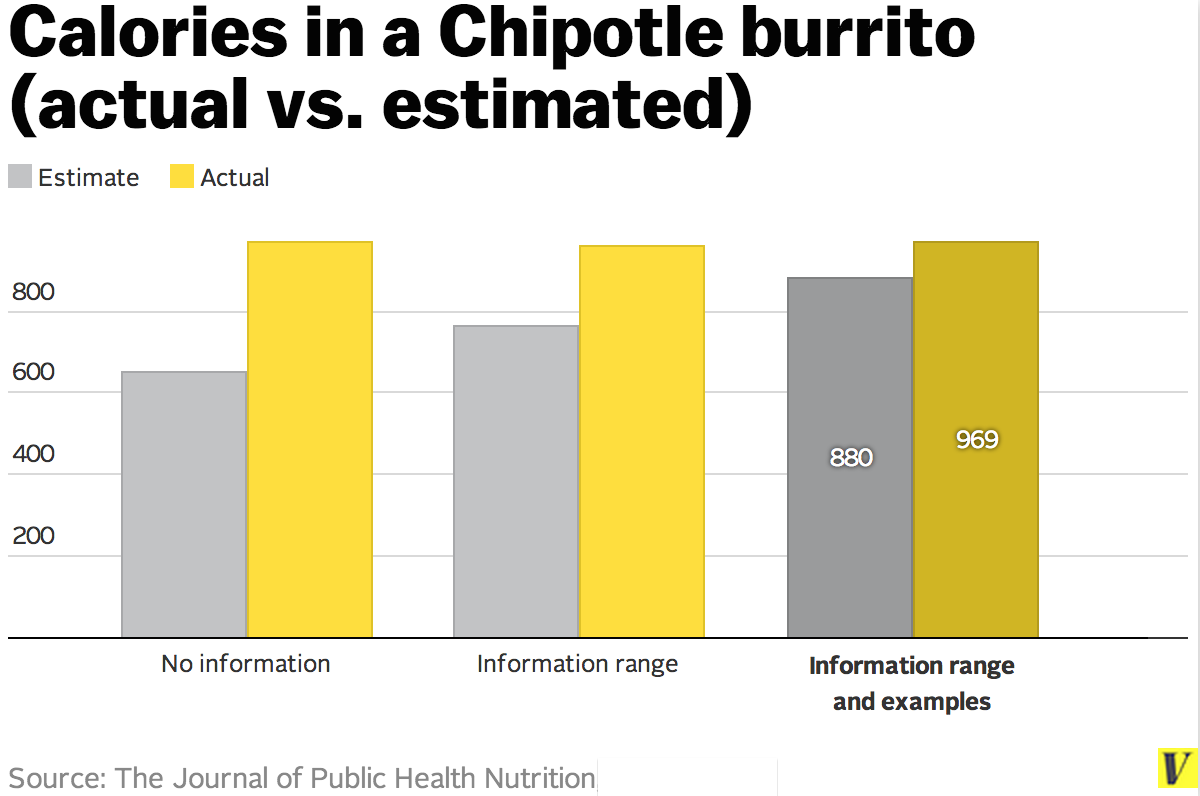 The Obamacare requirement to post calorie labels, however, favors the range approach. In regulations published in 2011, the Food and Drug Administration directed restaurants to publish a range from the lowest calorie version of an item to the highest. But it doesn't say anything about including examples of what's included at each end.

"Critics of calorie-count regulations are correct to point out that we cannot justify the costs of such requirements if the mandated information does not improve consumer understanding," study co-authors Peter Ubel and Peggy Liu write at the Monkey Cage Blog. "The FDA should require restaurants to define the endpoints of calorie ranges. Consumers deserve comprehensible information about their food choices."