Share All sharing options for: This fascinating map shows the most popular boys' names around the world

Names are an extension of culture, so when Reddit user xyuksr decided to put together this map of the most popular boy's names in dozens of countries and regions around the world, the result became more than just a map of names: it's a look at cultural trends, commonalities, and differences around the world. 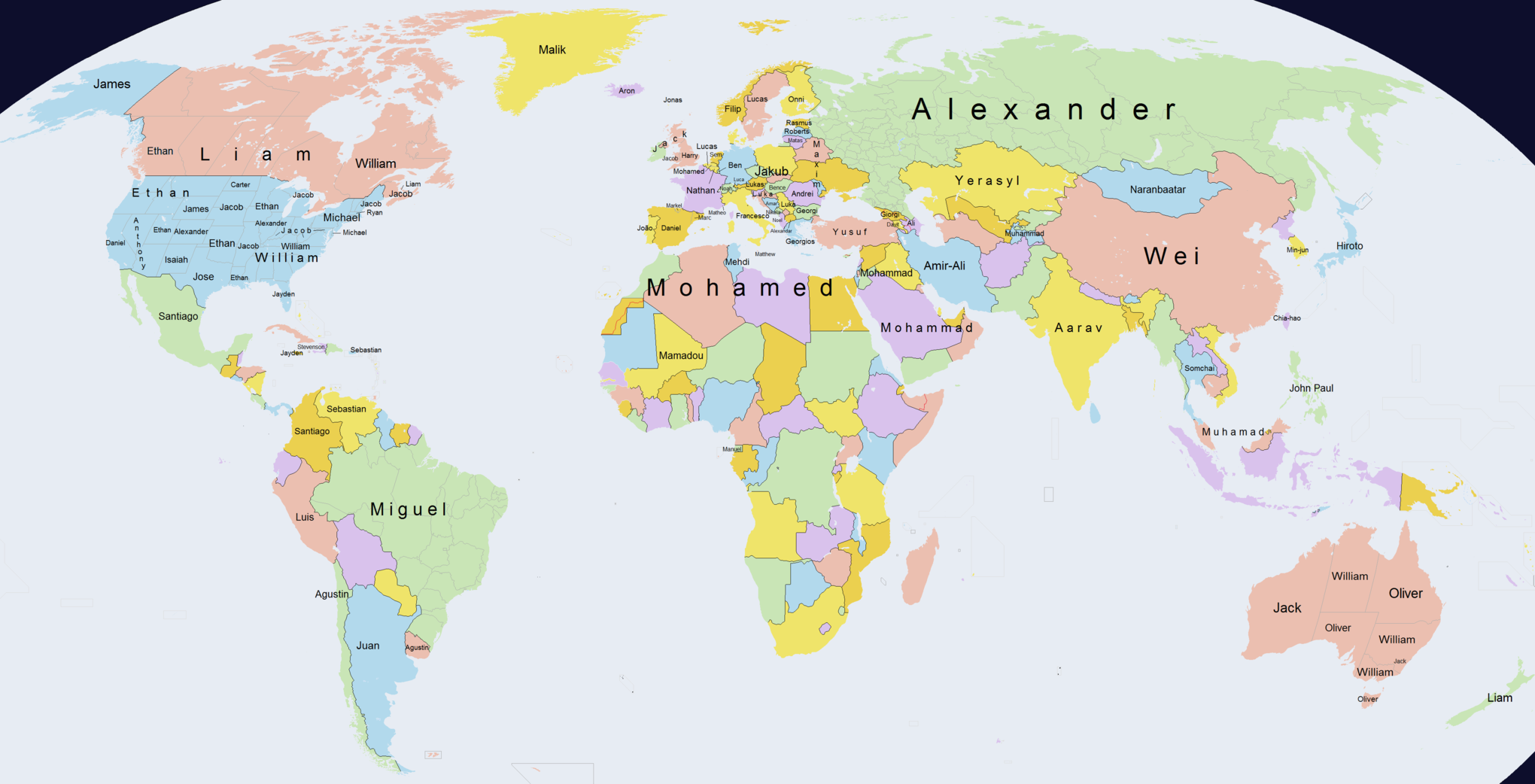 The widest trend here is pretty unmistakable: Mohammeds just dominate for most common male names across the Muslim world, especially the Middle East and North Africa. (It's spelled differently because there are different ways to translate the original Arabic.) It's also the most common in majority-Muslim Tajikistan and Malaysia; the derivation Mamadou is the most popular in majority-Muslim Mali and, I would wager, in much of West Africa. The trend has even followed Muslim immigrants to Europe; Mohammed became the most popular boys' name for Brussels in 2008 and London in 2009.

The prominence of Mohammeds is a good reminder of the importance of Islam to culture in Muslim-majority societies. Contrast this, for example, to the prominence of Alexander in Russia, where it's popular mostly for national reasons: Alexander was the name of three Russian emperors in the 18th and 19th centuries.

Here's the map zoomed in a bit to show Europe, Africa, and Asia: 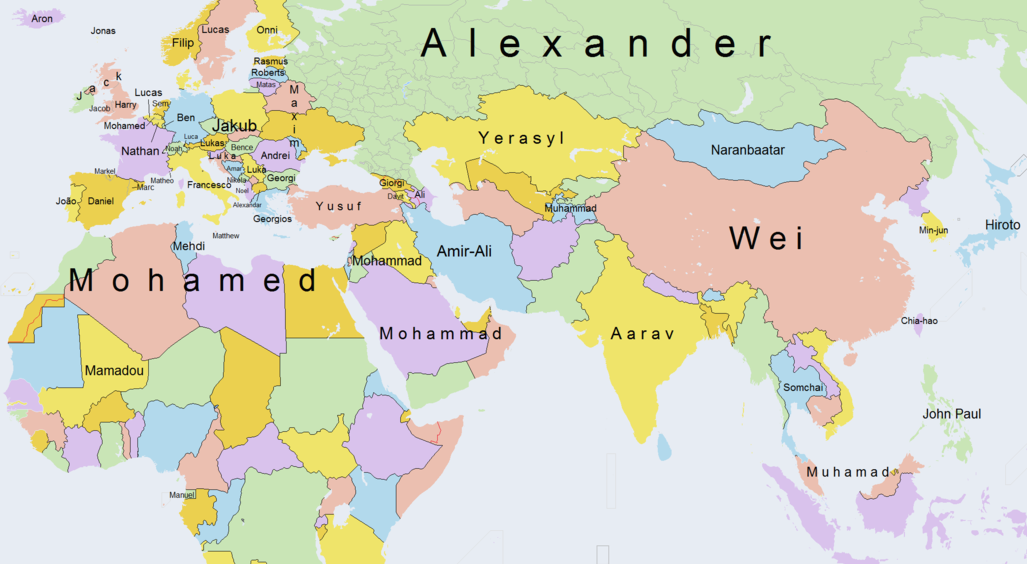 Islam actively promotes the idea of a shared Islamic community, called the Ummah al-Islamiyah, that is separate from and above political states. So this name's commonality is a reflection of the degree to which Islam is a share culture and community as well as a religion.

An interesting exception to that trend across the Islamic world is Iran and Azerbaijan, where Amir-Ali and Ali are the most common names, not Mohammed. This may be because Iran and Azerbaijan are majority Shia Islam, rather than Sunni. Shias still revere Mohammed, the divine prophet who founded Islam, but their sect split off in the seventh century because they thought Mohammed's son-in-law Ali should inherit power. That pro-Ali faction was known as the "Partisans of Ali," or "Shi'atu Ali" in Arabic, hence "Shia." And hence the popularity of the name Ali in Shia-majority countries.

Turkey is another big exception, but a less clear one: the most common name there is Yusuf. It's also a religious name: Yusuf derives from Joseph, the ancient Israelite who plays a big role in Judaism and Christianity as well. It's not clear why Yusuf trumps Mohammed in Turkey, but it's a reminder that the country has often been somewhat culturally apart from the rest of the Muslim Middle East.

Religiously inspired named aren't just in the Muslim world, of course. The most popular name in the Philippines, John Paul, is a reflection of the southeast Asian country's deep relationship with Catholicism, which the Spanish brought there 500 years ago.

Here's the map zoomed in on Europe: 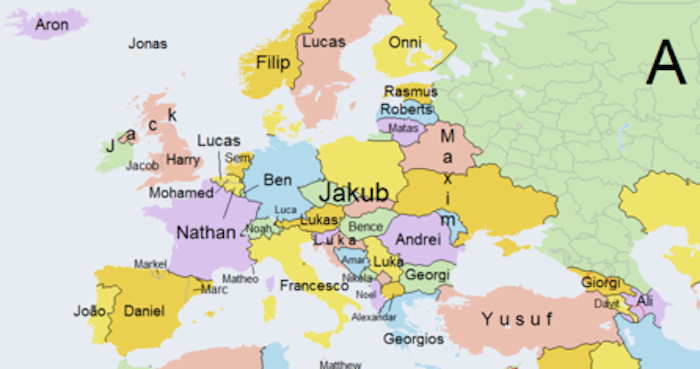 There are more fascinating little trends and datapoints here. Santiago huge in Latin America: it's the most popular boys' name in Mexico, Venezuela, and Colombia; it's also the name of the capital city of Chile. The reason is Saint James the Great, the patron saint of Spain, which colonized Latin America. Santiago means Saint James. 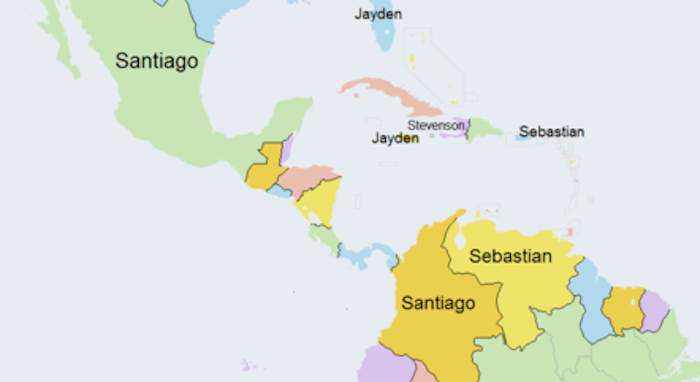 The etymology of how you get from Saint James to Santiago is itself kind of a fascinating little journey: Saint James' actual given name way back in the first century AD was Ya'akov, a Hebrew name. Because the Catholic church used exclusively Latin for centuries, Ya'akov became the Latin name Iacobus. That became the Italian Giacobo, which became Giacomo, which the English turned into James. That's why we English-speakers call Ya'akov by Saint James. But the Spanish turned that Latin name Iacobus into Jacob. So, for them, Ya'akov was Saint Jacob, or Santo Yago. You can see how Santo Yago became Santiago. That's how centuries of religious and political history took the Hebrew name Ya'akov and made it into Santiago, now the most popular name in a vast part of the world that the original Ya'akov did not even know existed.

There's surely much more going on here. If you see anything interesting, drop me an email at max@vox.com or tweet me at @max_fisher and I may include it. 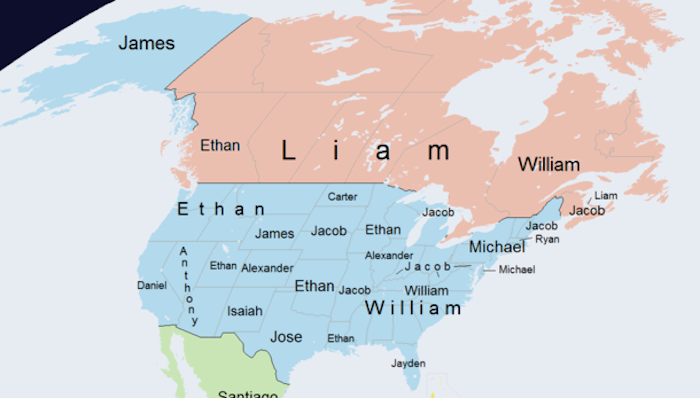 One big caveat: the sources for this data vary widely across national and regional surveys, held at different times and made with different standards, so you should not consider this ultra-rigorous or definitive, just an interesting glimpse at how people are naming their male children around the world.