On Wednesday, David Corn of Mother Jones reported on several videos where now-Senator Rand Paul criticized the spending policies of President Ronald Reagan. "Domestic spending went up at a greater clip under Reagan than it did under Carter," Paul says in one. "During Reagan's two terms, domestic spending went up faster than Jimmy Carter," he says in another.

Is Paul right? By the most simple metric — how much spending went up, in current dollars — his case looks strong. Domestic spending rose from $280 billion to $457 billion over Carter's term. Over Reagan's two terms, it rose all the way to $774 billion: 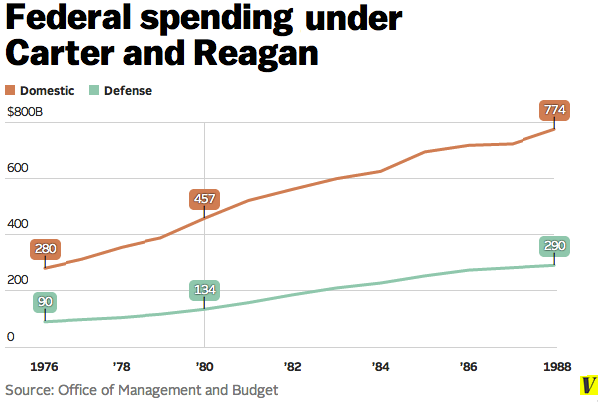 But many analysts prefer to look at spending as a percentage of GDP, thinking that this more accurately describes whether the country can afford its spending commitments. And GDP grew quite a lot during Reagan's presidency. When this growth is taken into account, the supposed soaring spending growth under Reagan disappears: 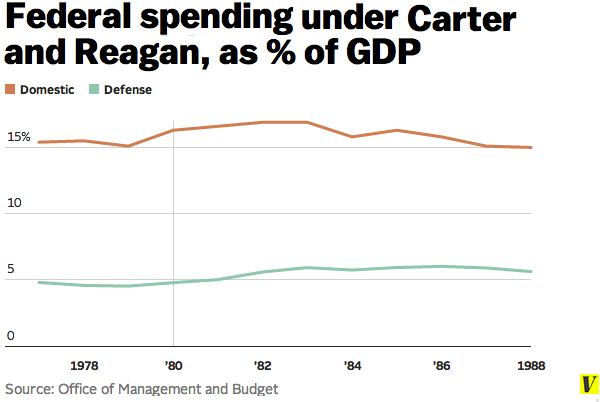 By this metric, Carter increased domestic spending over his presidency (from 15.8 percent to 16.4 percent) — and Reagan decreased it (down to 14.9 percent). When the growth of the economy is taken into account, the runaway domestic spending Paul refers to disappears.

Let's examine this metric for our last 6 presidents, with the last year of each administration marked. Here's what we find: 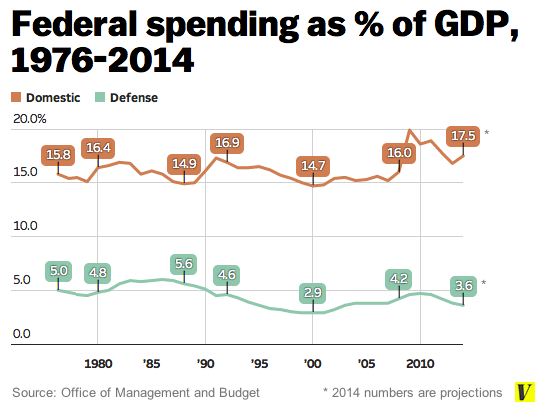 Viewed this way, Reagan is actually the second-biggest domestic spending cutter of recent times, topped only by Bill Clinton. This is because Reagan and Clinton saw massive economic growth over their tenures — so although both increased the absolute amount of domestic government spending, the GDP grew so much that these effects were dwarfed. (Of course, they were also fortunate enough not to end their terms during a recession.)

So next time you hear the parties fight over whether we can afford certain spending levels, remember that the answer can really depend on how much the economy is growing.