States are just starting to get their first in-depth look at who is signing up for Obamacare.

They're seeing that Medicaid is really popular, huge variation in the amount of young adults signing up, and that people aren't actually gravitating towards the very cheapest plans.

The state exchanges have generally been more successful than HealthCare.gov, functioning more smoothly and enrolling a larger percent of those eligible. So here's what they're starting to find about who did, and didn't, sign up for Obamacare.

The states that moved to establish their own exchanges, with the exception of Idaho, also took on the Obamacare-funded Medicaid expansion. It should come as little surprise, then, that Medicaid made up a significant chunk of enrollments in these states. Even in Washington and Kentucky, which had functional websites from the start, Medicaid made up around four in five signups.

Note that some states are left out of this report due to a lack of reliable data. But the trend is pretty clear: Medicaid is popular. 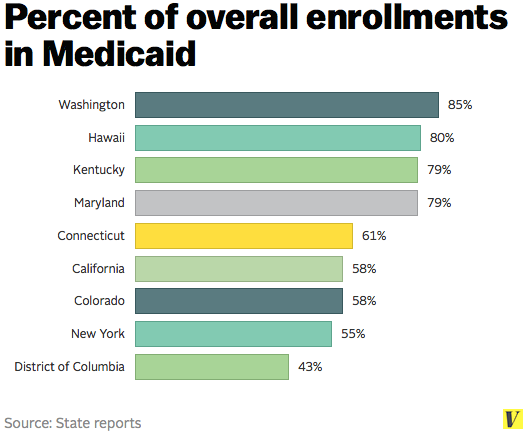 Young adults (people between 18 and 34) were a closely watched demographic this year. Younger people tend to have lower health-care costs, which can hold down premiums for everyone else.

Nationally, 28 percent of people signing up were between 18 and 34, which falls short of the 39 percent goal the White House had set earlier this year. Between states, there was pretty huge variation in how well they did in young adult enrollment. 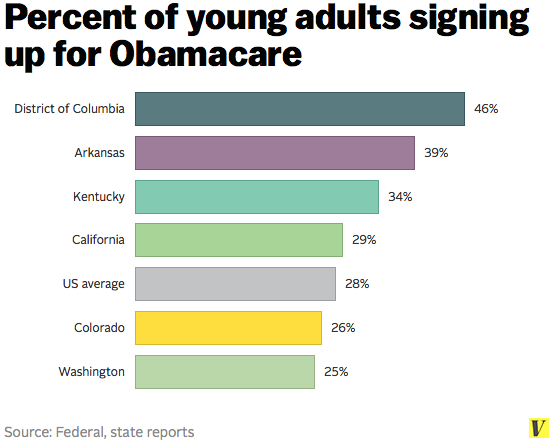 A caveat: Arkansas's exchange, which is in the chart for comparative purposes, is run by the federal government, while the listed state exchanges are run by the corresponding state. The Arkansas number also accounts for people who signed up for the federal exchange both through conventional means and the Medicaid private option.

Arkansas, which refused to manage its own exchange, might provide a lesson for enrolling young adults. Arkansas expanded its Medicaid program through a private option: the state is using expansion dollars to sign up low-income residents for private insurance plans. 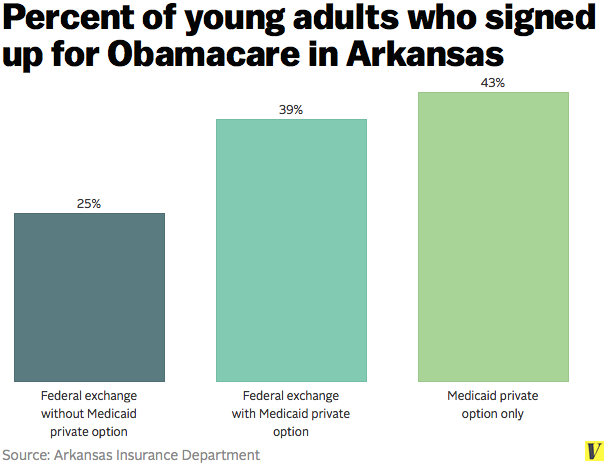 Outreach groups like Enroll America say the biggest hurdle to getting people to sign up for Obamacare is the perception that health insurance is really expensive. So once people are told they probably qualify for tax credits under the health-care law, they're much more likely to sign up.

And, as it turns out, most of people signing up on state exchanges really do qualify for tax credits — at least in the states that reported tax credit numbers so far. 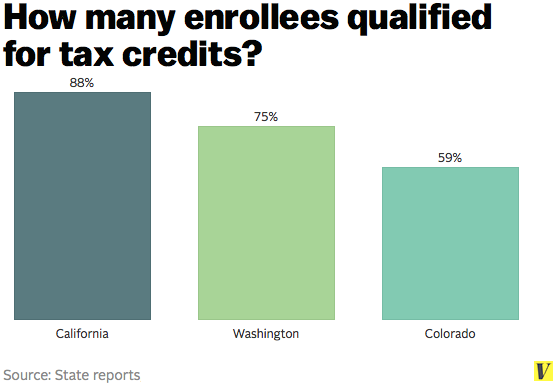 Obamacare offers five plan options on its marketplaces: minimum coverage, bronze, silver, gold, and platinum. Minimum coverage is, obviously, the minimum in terms of price and coverage. Platinum covers the most at the highest cost.

It turns out people like the silver and bronze options the most, based on a few states' results. 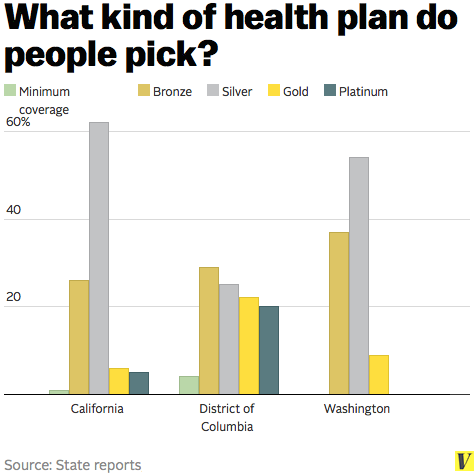 Enrollment in the federal marketplace is officially closed, but, as The Hill reported, exchanges in at least eight states and the District of Columbia are still open for enrollment.

Nevadans have until May 30 to sign up for health insurance, and those in the District of Columbia and Oregon have until April 30. The remaining states are deciding special enrollment eligibility on a case-by-case basis, and Connecticut and Rhode Island still don't have enrollment deadlines for people who faced technical issues.

That means there's a very good chance enrollment in Obamacare's marketplaces will likely surpass the 8 million the White House reported earlier this month — even though it's already ahead of projections. 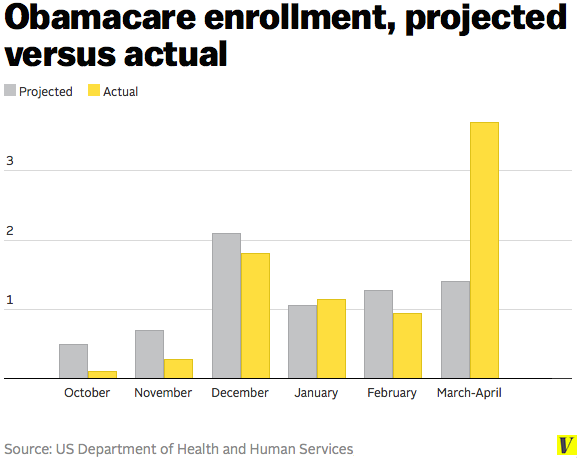 Update: For clarity, this post was updated with Arkansas's full exchange data.