Share All sharing options for: 16 ways college graduates are different

How much of this is caused by their higher levels of education, and how much is caused by other factors? Bachelor's degree recipients are more likely to come from better-off families in the first place. Half of all students from the top income quartile had finished a college degree by age 25, compared to less than 10 percent of those from the bottom quartile. Then bachelor's degree recipients earn more money over their lifetime, leaving them with more money to support their Starbucks habits (or their drinking habits) and their penchant for going to the movies.

But at least on health outcomes, research has shown that factors other than education (like more money and better health insurance) explain some, but not all, of the gap. Extra years of education really do add something.

College graduates are more likely to get married

College graduates are now more likely to get married than people who didn't attend college — a reversal of longstanding patterns. 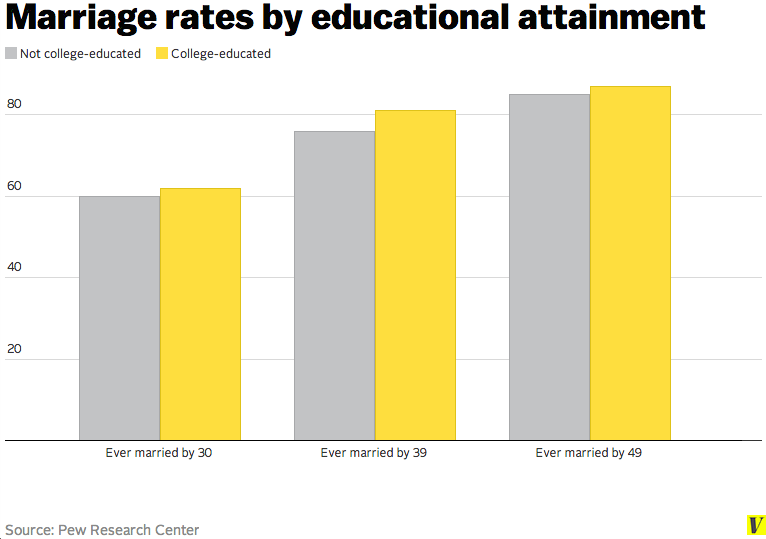 When college graduates get married, they're more likely to stay married 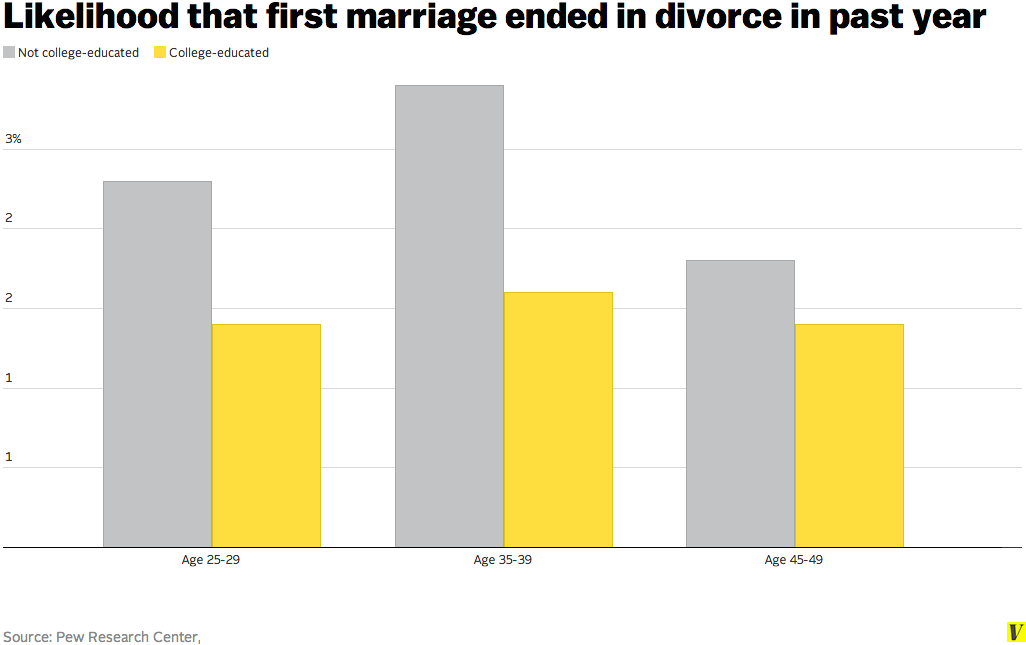 The more education a woman has, the fewer children she's likely to have by age 44. (Pew Research Center, which compiled the data, notes that well-educated women also tend to delay childbearing, so it's possible — but by no means certain — that they catch up later in life.) 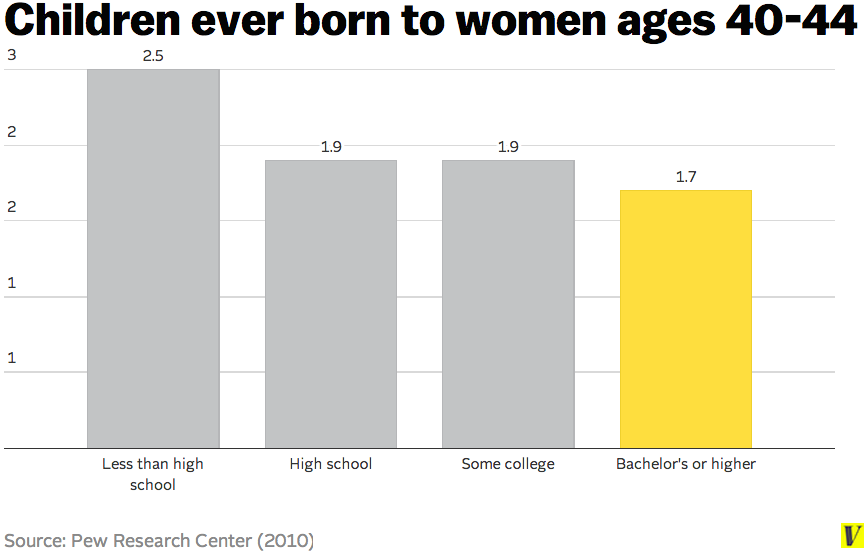 College graduates are slightly less optimistic about their children's future

More college graduates than nongraduates expect their children will go to college, too, although not by much: 97 percent versus 93 percent. But they're less confident their children will do better than they did. That might be because parents with college degrees are starting higher up the ladder. But a slightly higher proportion said they expected their children won't even attain their standard of living. 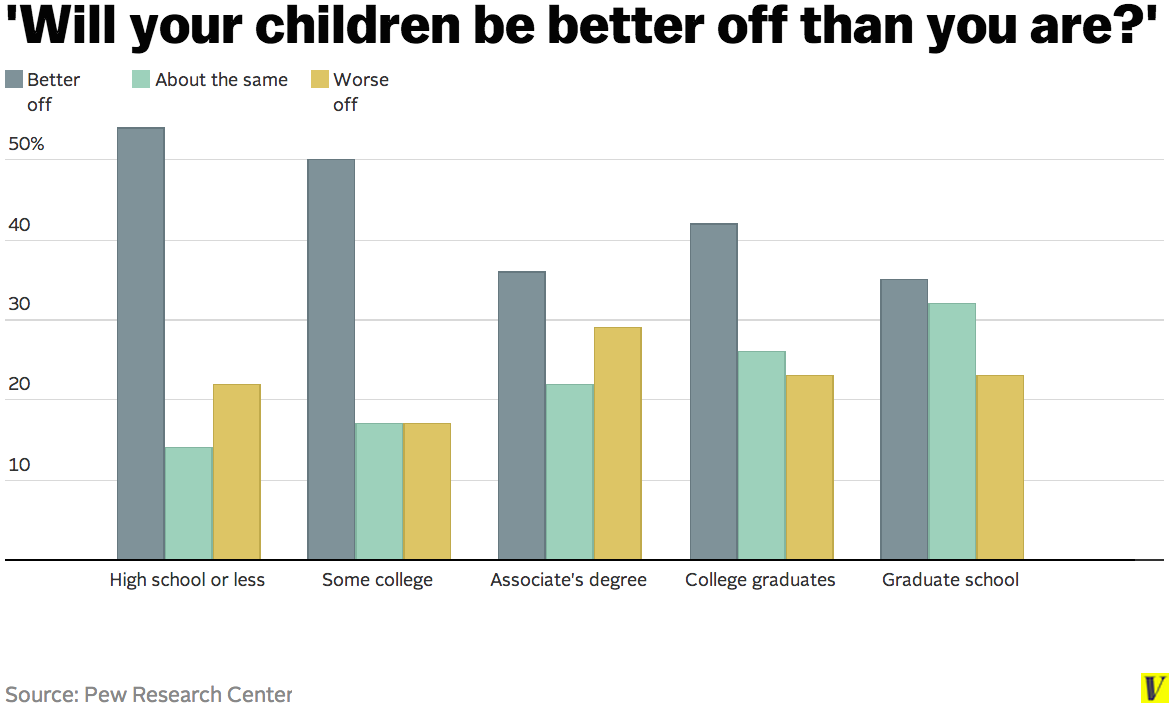 Voting rates march up steadily with education levels. A majority of voting-age Americans with some college or with associate's or bachelor's degrees vote. The more educated you are, the more likely you were to vote in the 2012 presidential race. 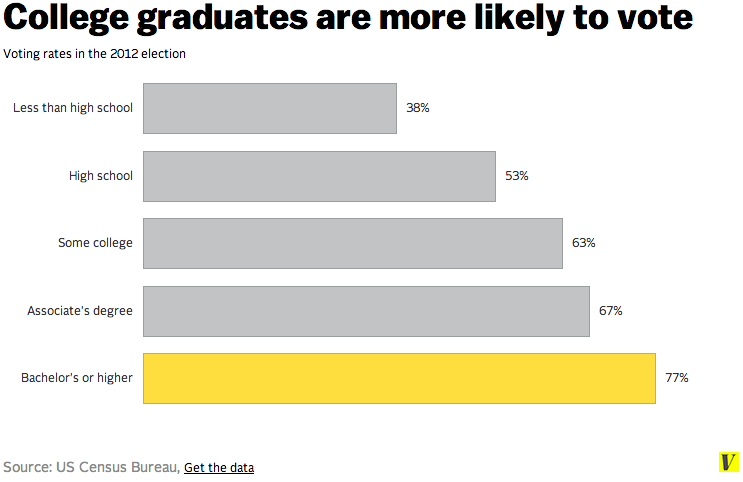 Former Massachusetts Gov. Mitt Romney won a larger share of voters with a bachelor's degree than he did of less-educated voters in 2012. (President Obama trounced Romney among college graduates with advanced degrees, who made up about 18 percent of the electorate.)

More educated Americans are more likely to say that people are born LGBT, rather than believing their sexual orientation is a product of their upbringing or envirnoment.

College graduates are less likely to be obese

For both men and women, the risk of obesity decreases as education levels increase, the Centers for Disease Control and Prevention have found. 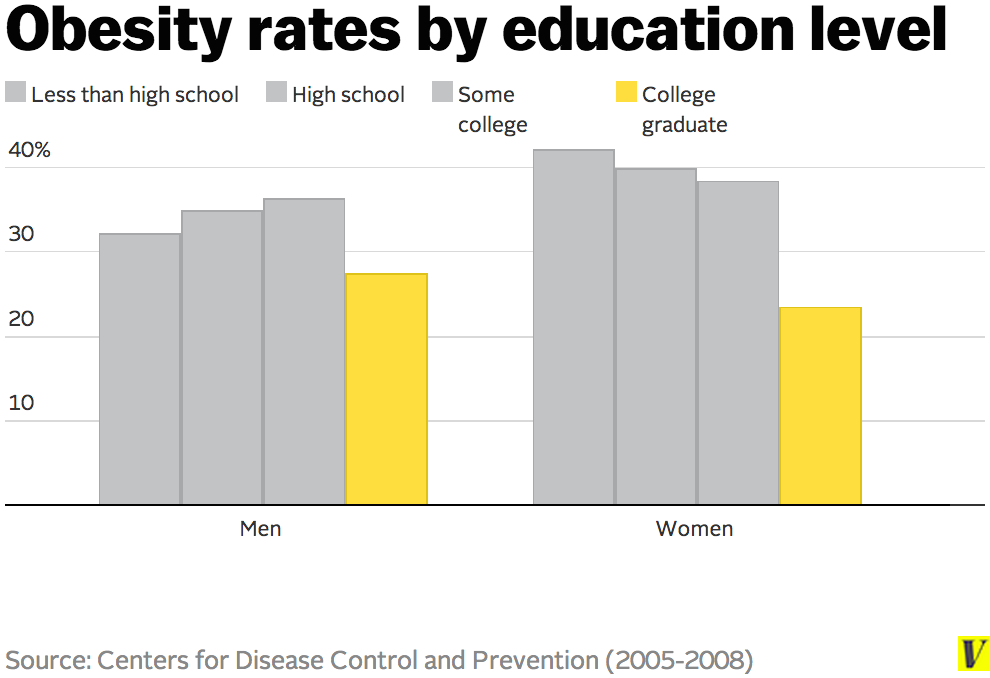 Not only are college graduates less likely to be obese, they're much less likely to smoke (defined as having had at least 100 cigarettes in a lifetime and smoking every day or some days). 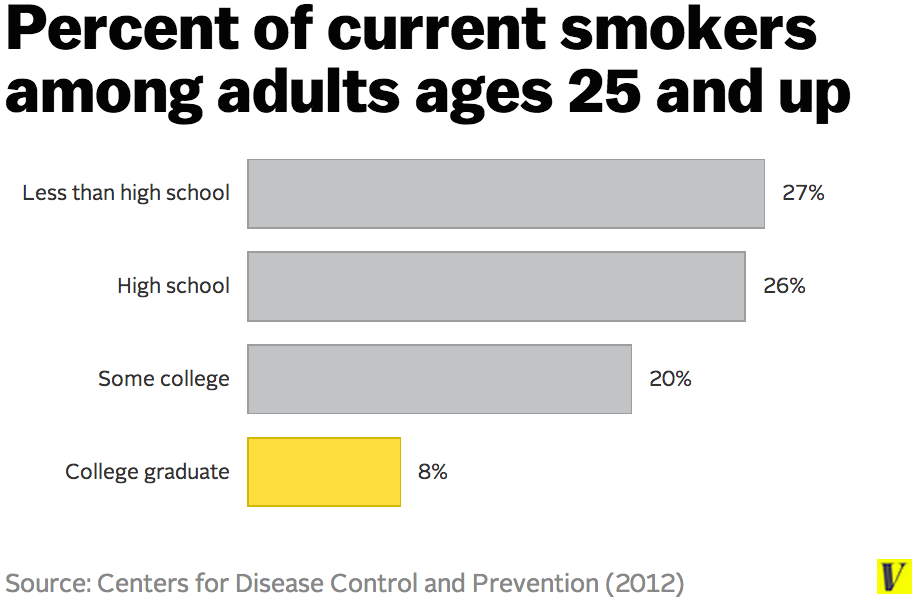 College graduates are much more likely to describe themselves as regular drinkers (at least one drink per month). And they're slightly more likely to be binge drinkers, too, than their counterparts with less education. 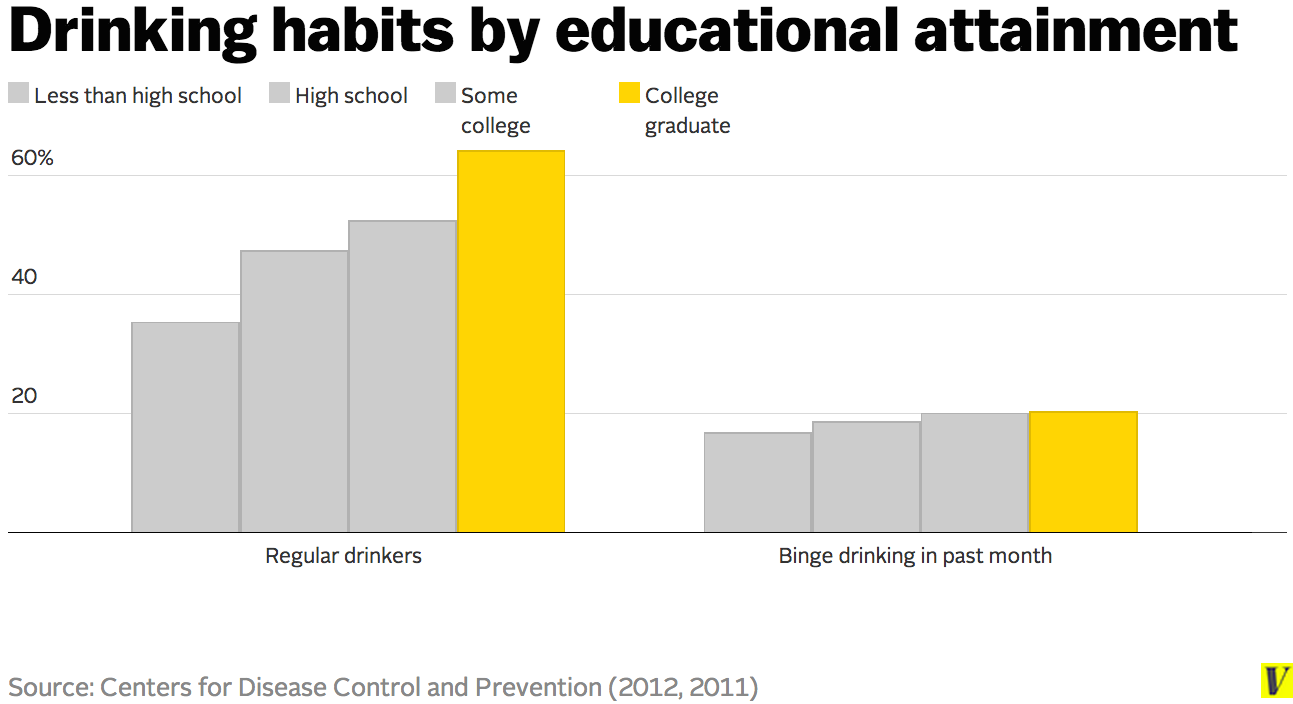 The Pew Research Center asked in 2009 if people would rather live somewhere with more Starbucks or McDonald's. McDonald's won nationally, 43 percent to 35 percent. (The rest didn't have a preference or didn't want to answer.) But not among college graduates: 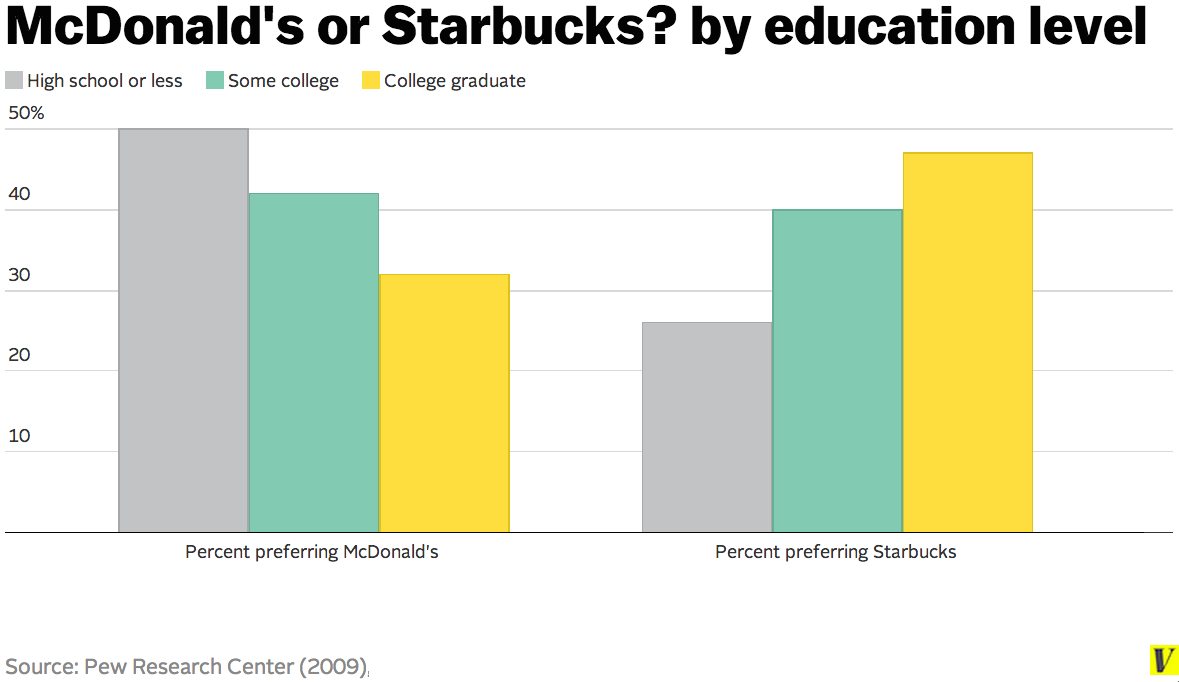 College graduates are less likely to have diabetes

Perhaps because college graduates also less likely to be obese, diabetes rates are much lower among the college-educated. 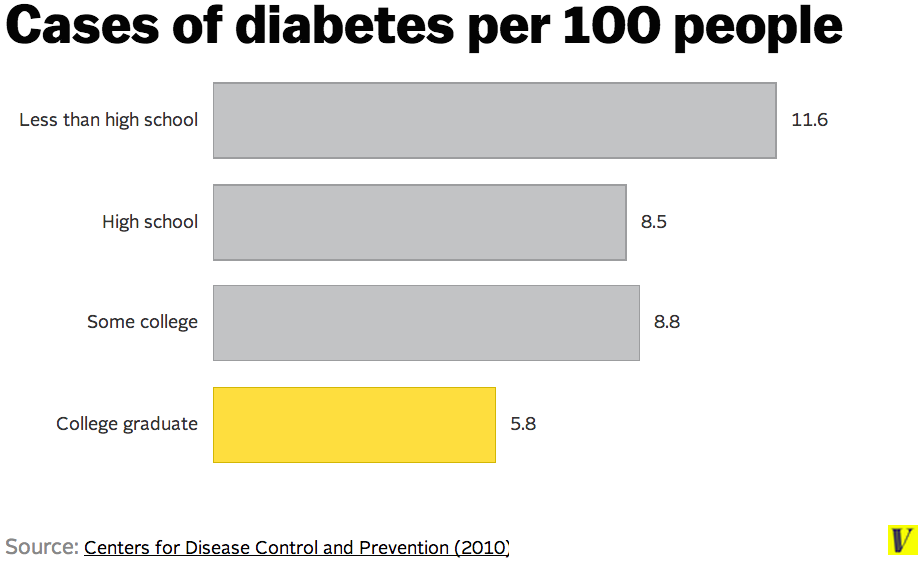 College graduates were more likely to go to the movies

A majority of all Americans went to the movies in 2012. But college graduates were more likely to go than adults with less education:

They might be more likely to go out to the movies, but they spend less time in front of the TV at home — just under 2 hours per day. 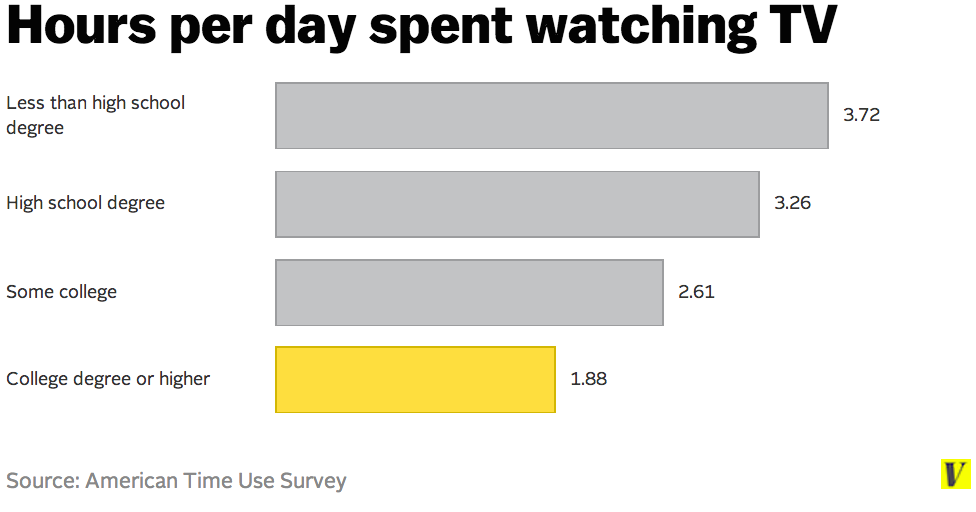 College graduates spend less time sleeping and getting ready for the day than everybody else. (These estimates are averages for every day of the week, and most Americans sleep in on the weekends.)

College graduates' higher incomes don't seem to buy them more time to relax. They spent less time on all their leisure activities — such as playing sports, watching TV, or just relaxing — than less educated Americans, both on weekdays and on the weekend.

It’s the holidays. Be nice to the workers trying to help you.

The deep roots of antisemitism’s resurgence in America