Share All sharing options for: Boys with incarcerated fathers are screwed before they even get to school

A new study in the journal Sociological Science has found that boys whose fathers have gone to prison are less likely to have the behavioral skills they need to succeed at school by the age of five, and are more likely to have been placed in special ed by the age of nine. The paper, written by sociologist Anna Haskins of Columbia University, fills an important gap in the debate over mass incarceration and its impact on black men.

Furthermore, it raises the depressing possibility that what's called the "school-to-prison pipeline," where harsh school discipline makes students more likely to run into trouble with the law, is actually more like a vicious generational cycle: prison to school to prison. Here's what you need to know.

Haskins' paper used data from the Fragile Families Study, which tracked about 5000 children born between 1998 and 2000, and their parents, through the age of nine. Because the Fragile Families Study takes in a lot of information about these families, Haskins was able to control not just for factors like race or socioeconomic status that affect whole populations, but also for factors that are specific to each family — like parental behavior.

haskins was able, as much as possible, to isolate the impact of going to prison

This is important because a lot of the things that make children more likely to have incarcerated fathers also make them less likely to be "school-ready:" being black, being of low socioeconomic status, having parents who weren't well educated, and having fathers who were prone to "antisocial or deviant behavior." Some commentators say that things like the last two are evidence of a "culture of pathology," which they believe is the most important cause of discipline problems for kids and adults alike.

It’s a tangled ball of factors, but Haskins did her best to untangle them. She compared kids who had the characteristics above, but whose fathers didn’t end up in prison, to kids who had those characteristics and whose fathers did (specifically, whose fathers went to prison for the first time when their kids were between 1 and 5). This means that both groups of kids were exposed to the kind of parental behavior that might add up to a "culture of pathology." So Haskins was able, as much as possible, to isolate the influence of going to prison itself.

What the study means

tough school discipline makes students less likely to succeed, and more likely to get in trouble with the law

This finding is coming out at a time when there's a lot of interest in what's called the "school to prison pipeline." Tough school discipline policies tend to make affected students less likely to succeed in school — one study found getting suspended or expelled was a stronger predictor of dropping out than doing badly in classes — and more likely to run into trouble with the law. According to one study, even when students weren't being suspended for the serious offenses that state law requires suspensions for, they were still 2.85 times more likely to run into the "juvenile justice system" over the next year than students who weren't suspended.

The students most likely to be affected by these zero-tolerance discipline policies are predominantly black students in struggling city schools, and the disparity in discipline — black students are three times more likely to be suspended than white students — has led Attorney General Eric Holder to call the school-to-prison pipeline a civil-rights issue, and to produce new "school guidelines" with the Department of Education to encourage schools to ensure their discipline policies are racially fair. 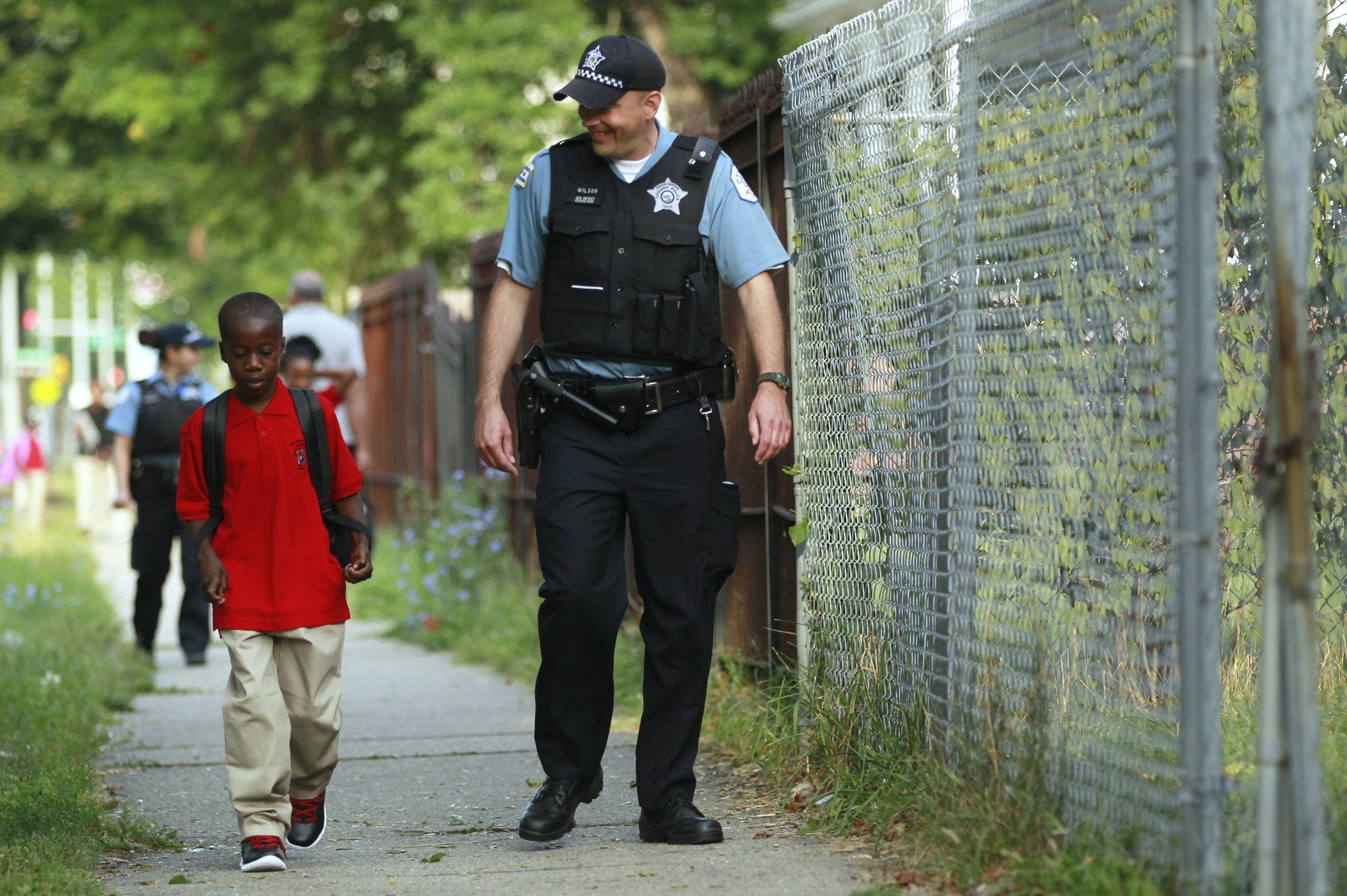 A Chicago police officer escorts a student on his way to school. Chris Walker/Chicago Tribune/Getty

The Haskins study makes it clear that fighting the school-to-prison pipeline isn't just a matter of working with schools to improve discipline practices, but taking a hard look at how many kids are at a disadvantage before they even get to school because their parents are in prison, and maybe even putting fewer of them in prison to begin with.