Yes, Ukraine is at risk of war, but not the kind you think

Share All sharing options for: Yes, Ukraine is at risk of war, but not the kind you think

There's growing fear that Ukraine's crisis could become a full-on war. Fighting between Ukrainian government forces and pro-Russia separatist militias (thought to include undercover Russian special forces) has already killed several people and is getting worse. Russia has tens of thousands of troops massed on the border. Everybody is making threats. Things are looking bad.

The closer that Ukraine gets to the threat of war, the better for Russia

But when we talk about a war in Ukraine, that can mean three very different things: (1) a civil war between Ukrainians, (2) a conventional war between Ukraine and Russia, or (3) a relatively bloodless Russian invasion of eastern Ukraine. Those first two are actually not very likely. The third is much more plausible danger: Russia can stir up the appearance of civil war without actual civil war: just enough violence between government forces and pro-Russia separatists, which Moscow could then use to justify an invasion of eastern Ukraine, like its earlier invasion of Crimea. But this requires Russia to really play up the appearance of a credible threat of civil war or conventional war, which is why those outcomes can look likelier than they really are.

Here is a quick rundown on the three kinds of war we're talking about, why the first two are so unlikely, but why the third is a serious and plausible danger:

It's not hard to see why people are worried about this. Ukrainian government forces have already assaulted the pro-Russia separatist militias; when you have repeated, escalating firefights between two sides, that is something that can become a war. The separatists, who are already sitting on a massive weapons cache, are picking up heavy military equipment left by the Ukrainian military. Lots of eastern Ukrainians supported the old government and were unhappy to see mostly-western protesters unseat it. The militias could get stronger, the military (which includes lot of eastern Ukrainians) could splinter, and today's failed government offensive could become tomorrow's civil war. 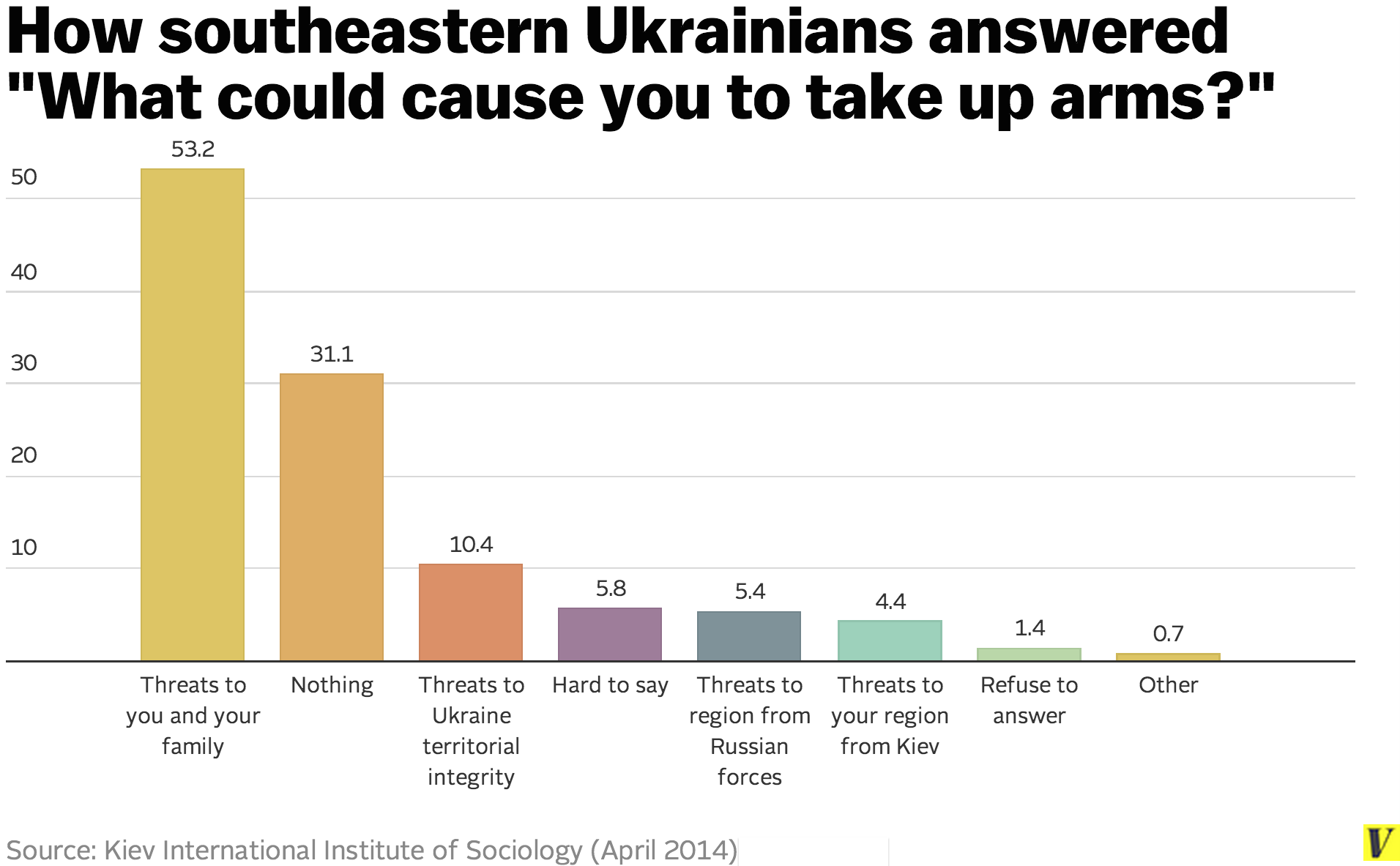 Eastern Ukrainians are just not into the idea of picking up a rifle to fight the Ukrainian government forces: only 4.4 percent said they would take up arms against "threats to your region from Kiev." And only a slightly larger share, 5.4 percent, would be willing to fight against Russian troops. No, for more than 84 percent of Ukrainians, only a direct physical threat to them or their families would make them willing to start shooting, if even that would do it.

This is pretty sold that, as warfare scholar James Fearon told my colleague Zack Beauchamp, a civil war in Ukraine is just not very likely. There wouldn't be nearly enough people to fight on the anti-government side. To be sure, the ongoing clashes between government forces and separatist militias are still deadly and may get worse, but unless something dramatic changes in Ukrainian popular opinion it will not lead to large-scale armed uprising.

This is an issue again where neither side wants a war, even if the Kremlin is flexing like it might.

But you can see why people are worried. The Russian military is really pretty larger and powerful. And Moscow has been threatening to invade eastern Ukraine if its "interests" are threatened, which seems to mean a Ukrainian government attack on the pro-Russia militias. When Ukraine did launch that attack on Thursday, Moscow said it was "forced" to have the tens of thousands of troops it had massed on Ukraine's border — did we mention Russia has massed tens of thousands of troops on Ukraine's border? — conduct "exercises."

The Ukrainian military is smaller, poorer, weaker, and less advanced. Ukraine spends one dollar on its military for every 30 that Russia spends. And the country is just broke. Here's what all that means: Ukraine does not want to fight a war with Russia, and will avoid it. That's a big part of why, when Russia annexed Crimea, Ukrainian troops simply pulled out.

This map, produced by a British military think tank, shows what a Russian invasion would look like. It would be over pretty quickly:

So, if Russia did launch a full invasion, it wouldn't be an invasion so much as the beginning of an Iraq-style military occupation. Except that Ukraine is much larger than Iraq, Russia has fewer troops than the US, and Vladimir Putin got so badly burned by the protracted and bloody Russian military occupation of much-smaller Chechnya that he seems unlikely to risk that happening again. 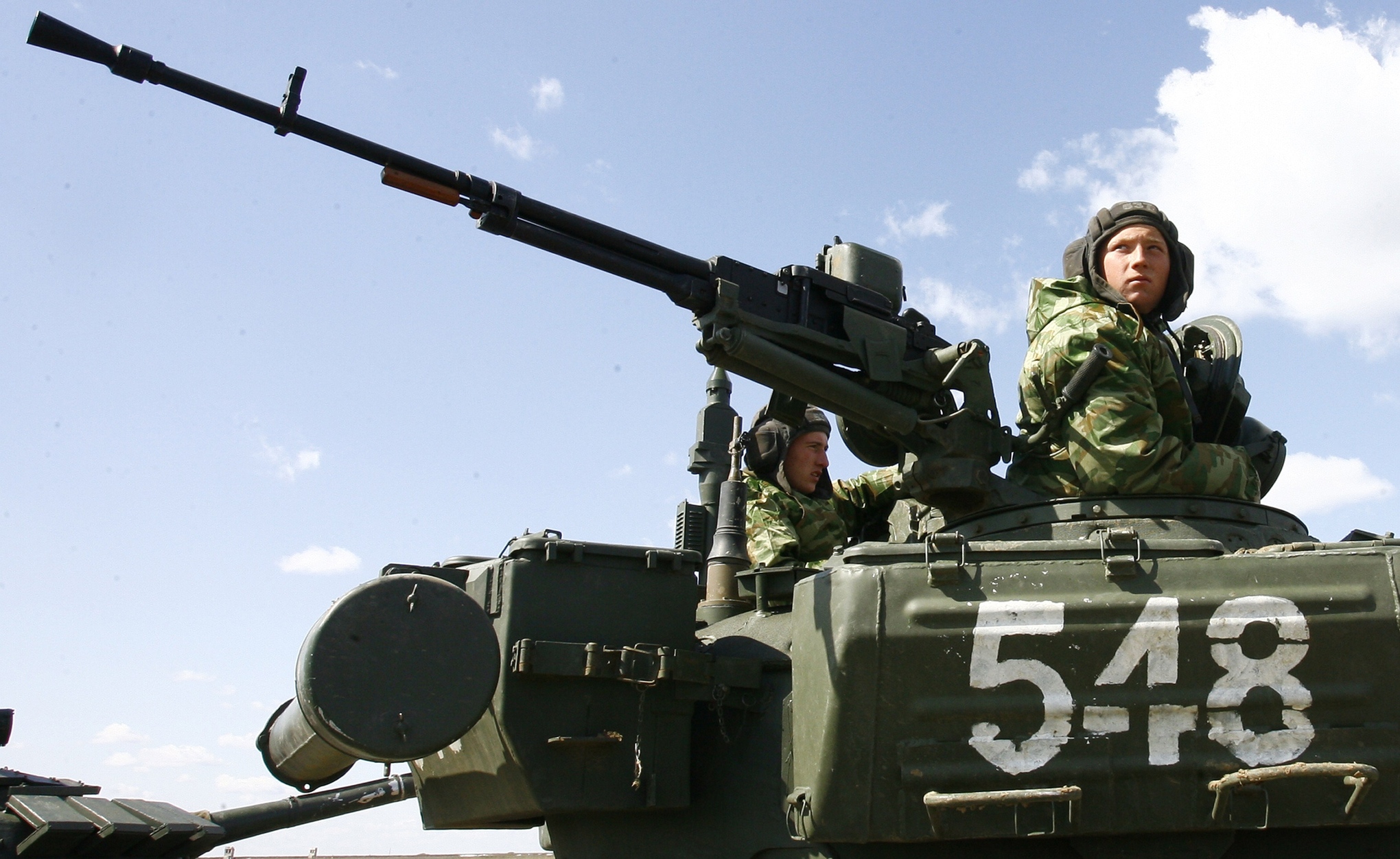 There are two things happening that make this look possible: Russia is not-at-all-subtly threatening to invade, by massing troops on the border and warning it may have to protect its "interest," and Russia is stirring up low-level conflict by backing the separatist militias. Russia will probably only invade if that low-level fighting starts to spiral out of control (hence the rising appearance of a civil war threat), giving them political cover and a tactical opening to intervene. But even if that never happens, Moscow may still come away with a win.

The closer that Ukraine gets to the threat of war, the better for Russia. If fighting between government forces and separatists worsens, that's good for Russia: the Kremlin has spent weeks preparing its case for intervention if that happens. Once a whole bunch of Russian troops are occupying eastern Ukraine, it would be pretty easy for Russia to annex that territory, as it did in Crimea. Even if things never get to that point, the bigger the danger grows, the more likely that the Ukrainian government (and Western governments) are going to be to accede to Russian demands to end the crisis. Their big demand is for Ukraine to adopt a federal government system. This would make the Russia-friendly, heavily industrial regions of eastern Ukraine more autonomous, and more able to deal with Moscow directly instead of relying on the central government in Kiev.

That's what can make this all so confusing. Russia, to get what it wants, appears to be deliberately increasing the apparent risk of a Ukrainian civil war or a conventional Ukraine-Russia war. In fact, neither of those is very likely. What is likely is continued low-level conflict, which if it gets really bad could culminate with a relatively bloodless Russian invasion like the one it launched last month in Crimea. That is a very bad outcome, but it's also not full-blown war.