Share All sharing options for: A reporter published a fake study to expose how terrible some scientific journals are

A reporter for the Ottawa Citizen wrote a plagiarized, completely incoherent paper about soils, cancer treatment, and Mars.

And eight scientific journals want to publish it.

These for-profit journals publish without peer-review

So-called "predatory" journals are online-only, for-profit operations that take advantage of inexperienced researchers under pressure to publish their work in any outlet that seems superficially legitimate. They're very different from more respected, rigorous journals like Science and Nature that publish much of the research you read about in the news — for one, the predatory journals don't conduct peer-review — the process where other scientists in the field evaluate a paper before it's published.

Spears built his article entirely from unrelated phrases copied from legitimate existing research, then sent it to 18 of these journals. Eight quickly responded, offering to publish his work for a fee ranging from $1,000 to $5,000.

One journal, the Merit Research Journal of Agricultural Science and Soil Sciences, even told Spears that they had had the piece reviewed by a soil expert and were willing to publish. You can check out the entire three-page paper at Weekly Science, a journal that describes itself as "an International Research Online Journal publishing the double blind peer–reviewed research papers in all fields of multi-science."

This isn't the first sting operation into predatory publishing

Last year, science reporter John Bohannon conducted a similar stunt, with the cooperation of the prestigious journal Science. He submitted a less absurd, but deeply flawed paper about the cancer-fighting properties of a chemical extracted from lichen to 340 of these journals, and got it accepted by 60 percent of them. Using IP addresses, Bohannon discovered that the journals that accepted his paper were disproportionately located in India and Nigeria.

The new sting shows that for many journals, the bar is even lower than feared

Earlier this year, I carried out a similar sting into a predatory book publisher — a company that uses the same basic strategy, but publishes physical books of academic theses and dissertations. When they contacted me offering to publish my undergraduate thesis for no fee, I agreed, so I could write an article about it. They gained the permanent rights to my work — along with the ability to sell copies of it for exorbitant prices online— but failed to notice that I'd stuck in a totally irrelevant sentence in towards the end, highlighting the fact that they publish without proofreading or editing.

Compared to these stunts, though, Spears' new sting goes a step further: it shows that for many journals, the bar is even lower than feared. He didn't publish a flawed study or a thesis with a random phrase buried in it. He wrote a completely plagiarized paper that made no sense, based on research conducted in a non-existent location (the Nepean Desert). And yet several predatory journals jumped at the chance to publish it. 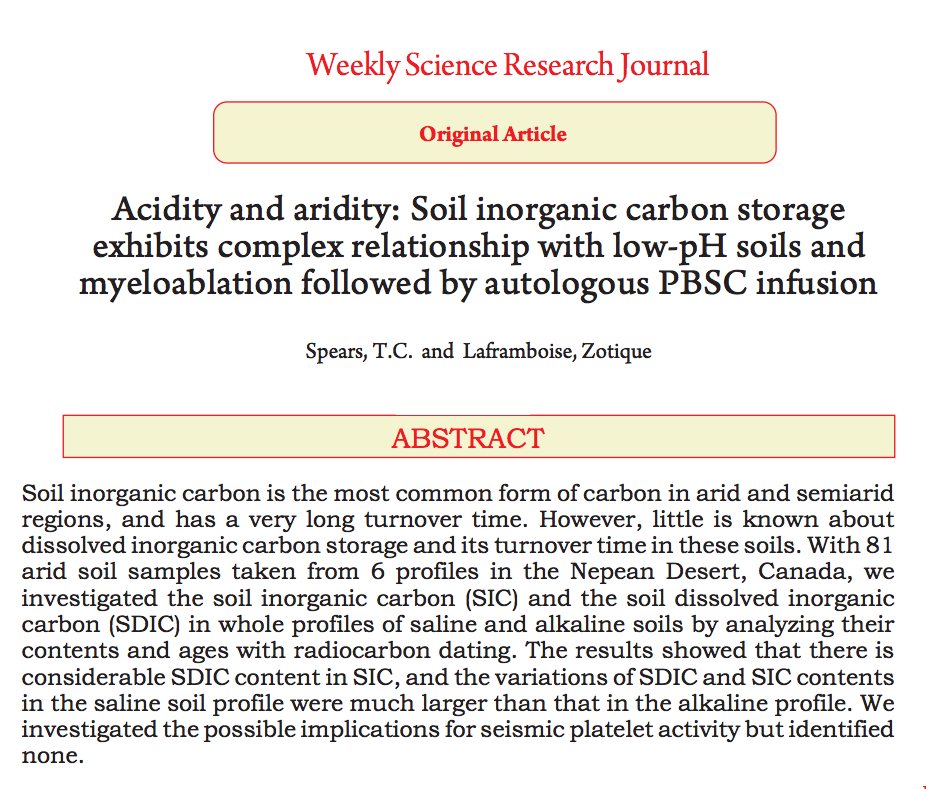 Inside the weird world of predatory journals

The existence of these dubious publishers can be traced to the early 2000's, when the first open-access online journals were founded. Instead of printing each issue and making money by selling subscriptions to libraries, these journals were given out for free online, and supported themselves largely through fees paid by the actual researchers submitting work to be published.

The number of predatory journals has exploded

The first of these journals were and are legitimate — PLOS ONE, for instance, rejected Bohannon's lichen paper because it failed peer review. But these were soon followed by predatory publishers — largely based abroad — that basically pose as legitimate journals so researchers will pay their processing fees.

Over the years, the number of these predatory journals has exploded. Jeffrey Beall,  a librarian at the University of Colorado, keeps an up-to-date list of them to help researchers avoid being taken in; it currently has 550 publishers and journals on it.

Still, new ones pop up constantly, and it can hard for a researcher — or a review board, looking at a resume and deciding whether to grant tenure — to track which journals are bogus. Journals are often judged on their impact factor (a number that rates how often their articles are cited by other journals), and Spears reports that some of these journals are now buying fake impact factors from fake rating companies to seem more legitimate.

Scientists view this industry as a problem for a few reasons: it reduces trust in science, allows unqualified researchers to build their resumes with fake or unreliable work, and makes research for legitimate scientists more difficult, as they're forced to wade through dozens of worthless papers to find useful ones.