Time named 100 influential people, but Beyoncé is number one

Share All sharing options for: Time named 100 influential people, but Beyoncé is number one

There's Beyoncé and then there's is everyone else. That's the message Time is sending out with its latest issue which promises "the 100 most influential people" or more apt: "check out Beyoncé and these scrubs."

Just look at the small-time treatment the magazine is using on names like Pope Francis — whom the magazine named the "person of the year" in 2013 —, Janet Yellen, and Vladimir Putin. A bit further down the cover you'll notice German Chancellor Angela Merkel and President Barack Obama are treated like the least-loved member of Destiny's Child. 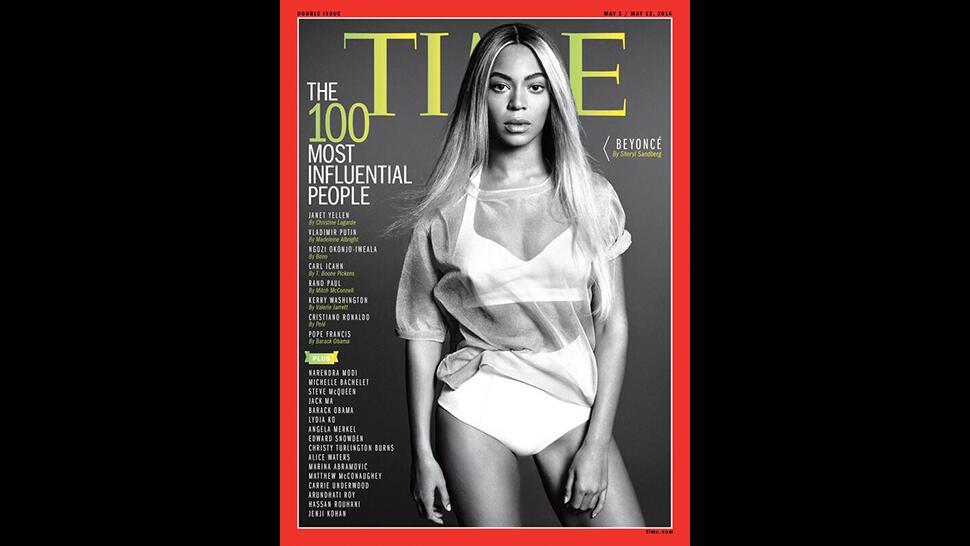 Overshadowing big names is something that has come naturally to Beyoncé throughout her career. But Ms. Carter wasn't always making world leaders look inconsequential.

Beyoncé's dominance on Time (there are inside covers featuring Jason Collins and Robert Redford) coincides during a resurgence of the #poormichelle meme, which is dedicated to one of the first people Bey ever overshadowed: Destiny's Child third wheel, Michelle Williams.  A Google trend chart shows as much: 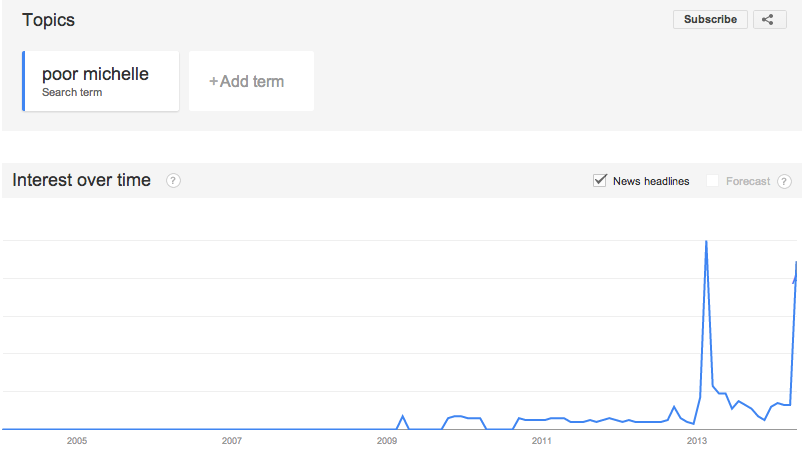 In every way, from fashion choices to the amount of singing she was allowed to do on DC's albums, Williams always got the short end of the stick, and Beyoncé the long. Williams' fate has concerned enough fans of the band for "Poor Michelle" to become a popular meme.  Now that everyone is Poor Michelle, here's a basic guide to what that means.

Who is Michelle Williams?

Michelle Williams is integral to the Beyoncé origin story. Back when the world was young and Britney Spears could still dance on her unbroken knees, Beyoncé was part of a group called Destiny's Child. Beyoncé's dad Matthew managed the group and her mom Tina designed the group's outfits.

Kelly Rowland, the Scottie Pippen to Beyoncé's Michael Jordan, and two other women named LeToya Luckett and LaTavia Roberson were also part of the group. Luckett and Roberson split from the group in late 1999 and grumbled about how Matthew Knowles showed favoritism toward his daughter. They were replaced by two more women, one of whom would also leave the group. And the last woman standing in that game of musical chairs was Michelle Williams.

What role did Michelle Williams play in Destiny's Child?

Williams started her Destiny's Child career by lip-synching to parts sung by LeToya and LaTavia. Williams joined the group in 2000, shortly after Luckett and Roberson were dismissed, but the group was still enjoying success with its "Writing on the Wall" album and its latest single "Say My Name." The group needed to release a video (back then videos and MTV were more influential than they are now) to capitalize on the momentum, so Williams and Farrah Franklin, the replacements, appeared in the video and lip-synched the parts belonging to Luckett and Roberson:

"Say My Name", a song about a woman who thinks her boyfriend is cheating on her and thus commands him to say her name (possibly in the presence of another woman), would go on to be one of the most successful Destiny's Child songs of all time. Williams and Franklin also lip-synched Luckett's and Roberson's vocals in another video for a single entitled "Jumpin' Jumpin'"

Shortly thereafter Franklin was dismissed, leading to a joke about the group being more like Survivor, a reality show where a bunch of people are dropped off somewhere in the world (usually warm, usually an island) and told to survive and compete for $1 million.

Did Michelle Williams ever get to sing?

"After all the darkness and sadness, soon comes happiness. If I surround myself with positive things, I'll gain prosperity," Williams sings. Her voice is a bit squeakier and higher than Kelly's and Beyoncé's, making it more noticeable. And that's a unique, if not silly, verse. But hey pop songs are pop songs.

In another one of Destiny's Child's biggest hits, "Lose My Breath", Michelle's verse sticks out again as well as the lack of her solo-time: 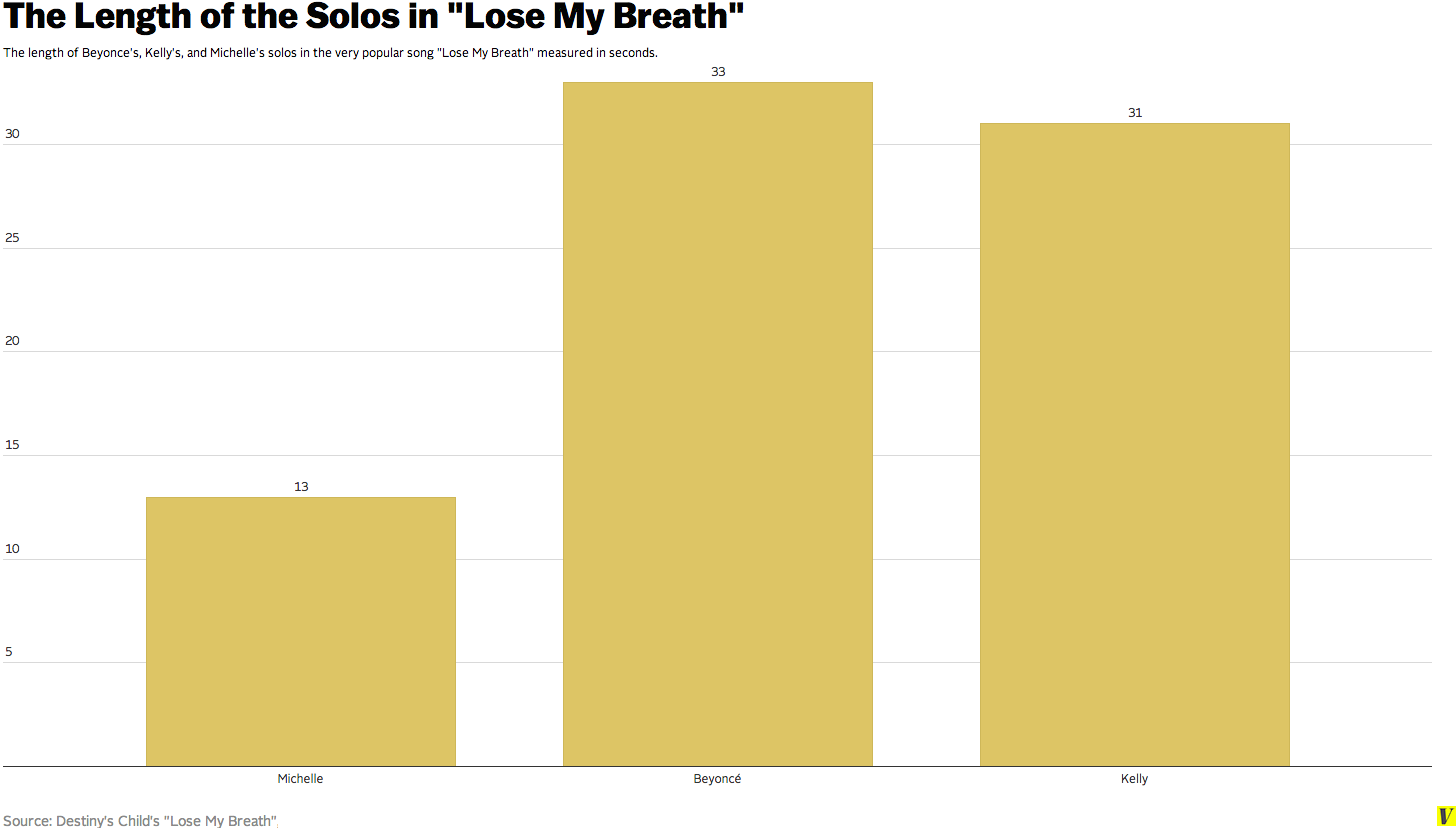 Add these small things together, and you get a quasi-serious conspiracy theory that Michelle was getting the short end of the stick. Ergo, "Poor Michelle" or "#poormichelle".

So, the "Poor Michelle" (#poormichelle) meme was born out of that?

Michelle's singing parts are part of it. Some of it also goes to the endless fascination with female groups getting along— something that dates back to groups like The Supremes. When Michelle first joined the group, a lot of us didn't know if she'd be there until the end. There were ongoing rumors and a narrative (MADtv has one of the more popular spoofs), even during Luckett's and Roberson's time in Destiny's Child, that Matthew and Tina Knowles favored their daughter by giving the the best part of songs and the best outfits to wear.

For example, if you're looking for Matthew and Tina's alleged favoritism, then you might make a joke about how Michelle wasn't allowed to wear a short dress: 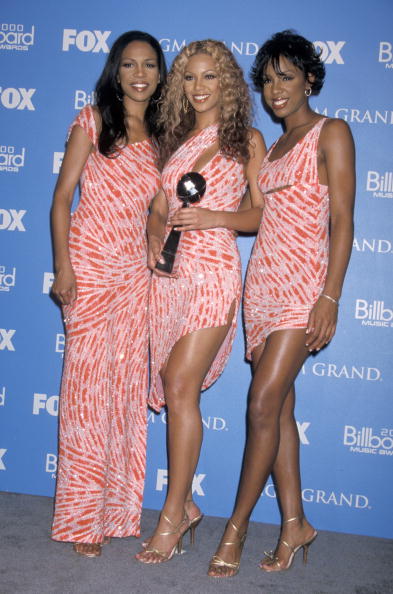 There was also this time, when Michelle fell during a group performance on the show 106 and Park.  Kelly and B seemed to be unfazed by Michelle's fall:

There's also the rumor that Michelle was told to change her name when she joined the group. Michelle's real name is Tenitra. Kelly's real name is Kelendria. The only person in the three-person Destiny's Child who kept her name was Beyoncé.

Yeah. There are logical explanations behind these cases of #poormichelle: performances can't just stop and the trend at the time (which continues today) is that pop groups can't all wear the same thing. But people had fun with this meta-narrative, and began trying to find more instances where Michelle "was" unloved. There's a site called PoorMichelle.com where all these instances have been logged and documented.

How did Michelle Williams take all of this?

Elegantly. Earlier this month, she addressed the hashtag and the meme by implying she made a lot of money and has no regrets:

#PoorMichelle that's not what my accountant said! Y'all be blessed now..

And if you think about it, she really is integral to Beyoncé becoming the omnipotent being that she is today. Beyoncé needed a start in overshadowing someone. Michelle was there to provide it.

So, let's be honest. Maybe we all are Michelles, and Beyoncé is just running things?

Time seems to think so. Lets all just accept our fate.