You have weird questions about cat cafes. We have even weirder answers.

Share All sharing options for: You have weird questions about cat cafes. We have even weirder answers.

Our long national nightmare is over: On Thursday, America got its very first cat cafe, a pop-up shop run by pet food company Purina. Which makes this as good a moment as any to pause (paws?) for a moment and understand how, exactly, we decided it was a good idea to combine espresso and felines. Cause who doesn't love a good cat-ucino? 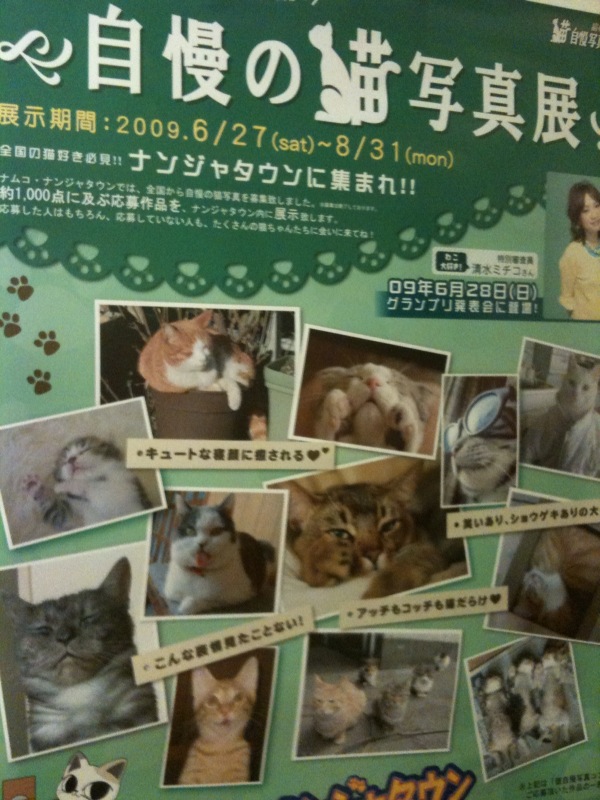 A flyer for a Japense cat cafe (Sean Bonner/Flickr)

Cat cafes are public spaces where people can pay to hang out with cats. There's usually a food and drink element too. Smithsonian Magazine says the first cat cafe opened in Taiwan in 1998, although the establishments have since become most popular in Japan, which has more than 150 such establishments. Most cat cafes seem to have anywhere between two and 20 cats.

As to why cat cafes took off in Japan, some point to a popular culture where cats are pretty central (think: Hello Kitty). Others suggest more a more practical explanation: many Japanese apartment buildings don't allow residents to keep cats as pets.

2. Why is a cat cafe coming to America?

It's partially a marketing gimmick: the cat cafe opening in New York is a pop-up shop run by pet food company Purina.

But it also has a lot to do with the fact that Americans just really like cats. They are the most popular pet in the United States beating dogs by a little, and birds and fish by a lot. 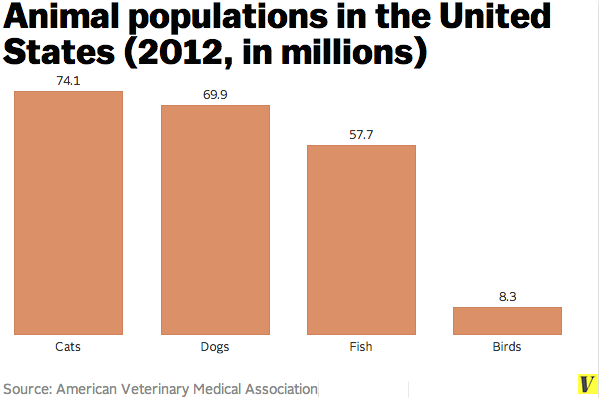 When people like cats, they seem to really like cats: the average cat-owning household owns 2.1 felines. The number is lower for dog-owners is lower with an average of 1.6 pets per household. Sometimes people who love cats but can't actually own one. Luckily, there's a cafe for that.

Sharla, a university student studying in Japan, has posted what is arguably the best video tour of Japan's cat cafes  (there is admittedly not a ton of competition).

First, you have to decide what you want. Most cat cafes charge by the by the hour of time spent with the cats. Judging from Sharla's video, the going rate for an hour with cats typically hovers around $9-$10 (or 1000 yen, as pictured in the price list below). Most cat cafes that Sharla visited offered prices for 1, 2, and unlimited hour visits. Some include a drink in the price. 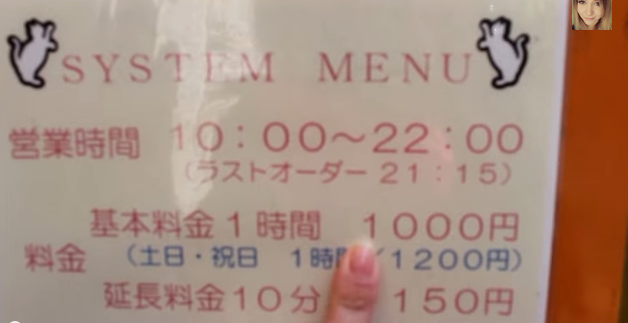 After that, cat patrons trade their shoes for slippers and wash their hands. 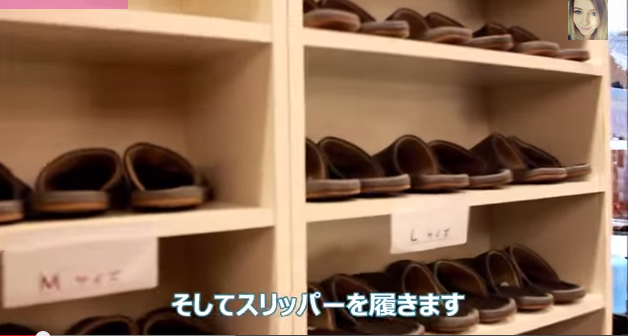 And then its pretty much what you'd expect: hanging out with cats. The two most popular activities appear to be petting the cats,and feeding the cats. At Kyariko Cat Cafe, which Sharla visited, she spent 300 yen (about $3) to buy cooked chicken for the cats. 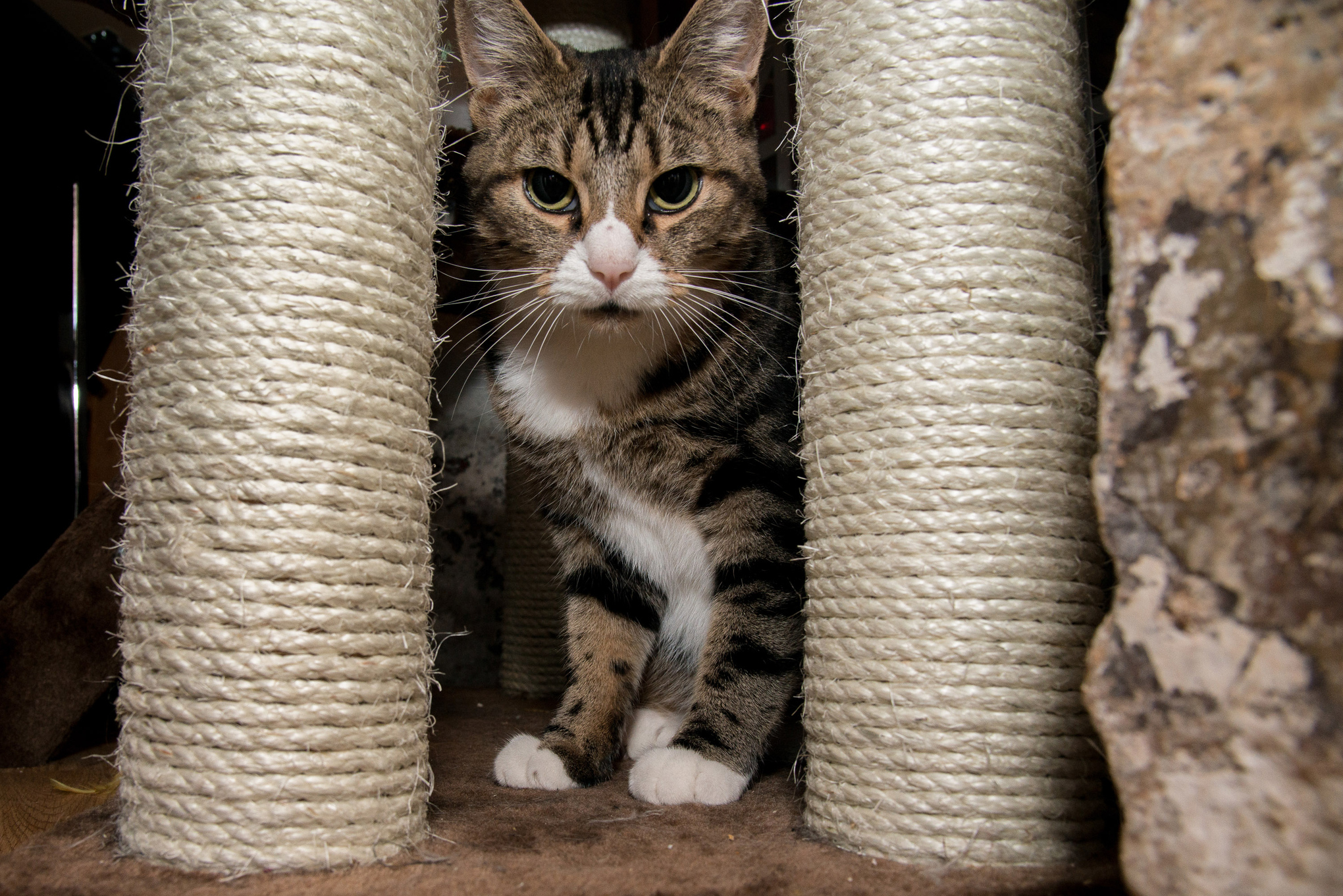 Perhaps unsurprisingly, public health officials aren't totally sold on establishments that are home to animals and sell food. Aspiring cat cafe owners have found their efforts stymied in Boston and San Francisco, where it is illegal to have cats and food service in the same space. "They cannot operate in the same physical location," said a spokeswoman for San Francisco's public health department told Time . "You can't have cats in the same place as food."

What little research we have on cat cafes suggests this caution is probably warranted. One study of cats living in Japanese cafes found some to test positive for an intestinal parasite called Giardia duodenalis, which can be transmitted by drinking from the same cup of water. Bottom line: don't drink from the cats' bowls, or let them lick your cup.

At the New York cat cafe, Eater reports, food and drinks are prepared in a separate room from where the cats all hang out. Patrons are, however, allowed to bring their various beverages into the cat area. So, yes, you can live your wildest dreams – if said dream involves sipping a macchiato and petting a Maine Coon.*

*We have not actually verified what breeds will be at the Purina Cafe, although Maine Coons are among the most popular cat breeds – and the only one created in the United States! 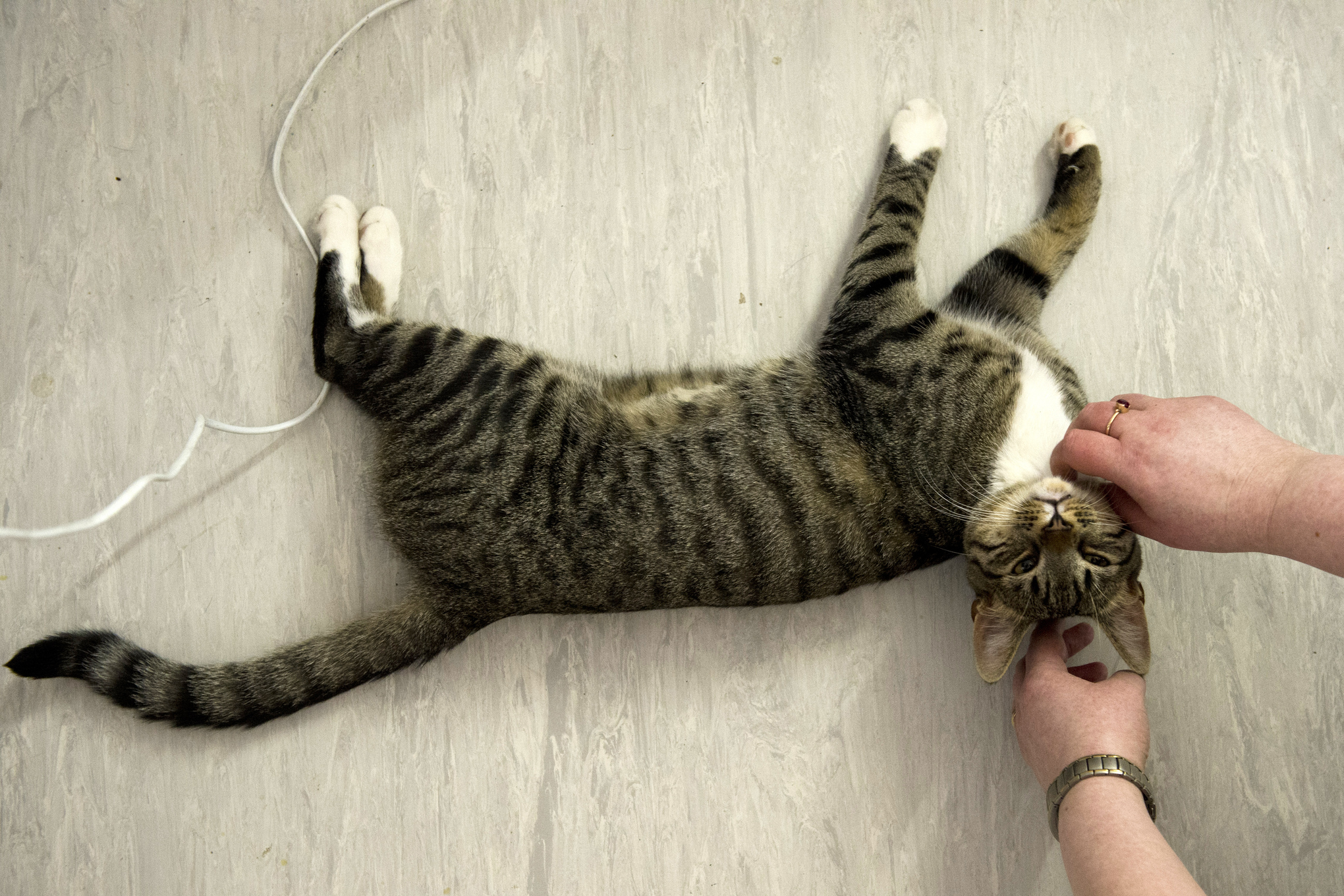 This...is an area of somewhat active debate. When the United Kingdom's first cat cafes opened earlier this year, John Bradsaw, of the University of Bristol's Anthrozoology Institute, wrote an article questioning the wisdom of putting lots of cats in the same place – where they would constantly come into contact with strangers.

Cats evolved as "solitary, territorial predators," Bradshaw writes, noting that its difficult for even experts to predict which cats will and won't like a multi-cat household. He notes that, in multi-cat households, there's typically a group that bands together and builds social relationships – while others tend to be loners, and have tense relationships with the other cats.

The difficulty is figuring out which cats are the more social ones.

"If scientists who have studied cat welfare for decades are still unable to predict which cats will adapt to a particular situation and which will not, can we rely on the choices of
the enthusiasts who set up cat cafés, or wish to set them up in the future?" Bradshaw writes.

6. So am I exploiting cats by going to a cat cafe? 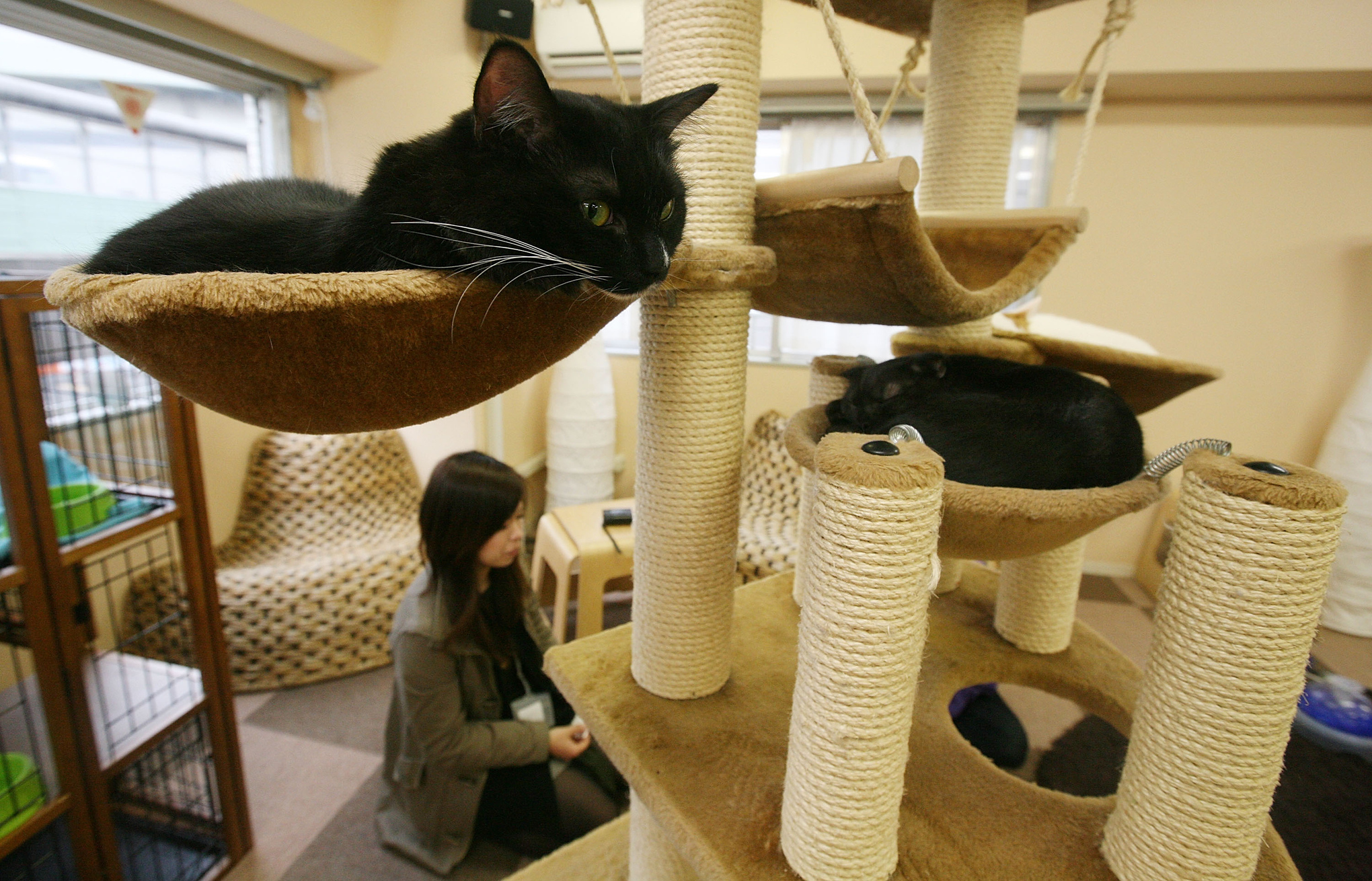 At the one opening in New York this weekend, probably not. The cats at Purina's pop-up Cat Cafe are all rescue felines who are available for adoption at the nearby North Shore Animal Shelter (which also happens to be the country's largest no-kill shelter). A spokesperson for the shelter told Gothamist that the cats in the cafe "were carefully selected to make sure they'd be comfortable with people."

7. Has anyone asked the cats how they feel about being at a cat cafe?

Yes, in fact! Chelsea Marshall at Buzzfeed asked the cats at the New York cafe some hard-hitting questions, including whether they were adding catnip to their coffee and some of their discriminatory policies against dogs. The cats were...evasive.

8. What is the best cat cafe name that includes a pun?

Easy question: that's got to be KitTea, the cat cafe currently seeking crowdfunding to launch in San Francisco.

9. I desperately want to go to the cat cafe in New York this weekend. Help? 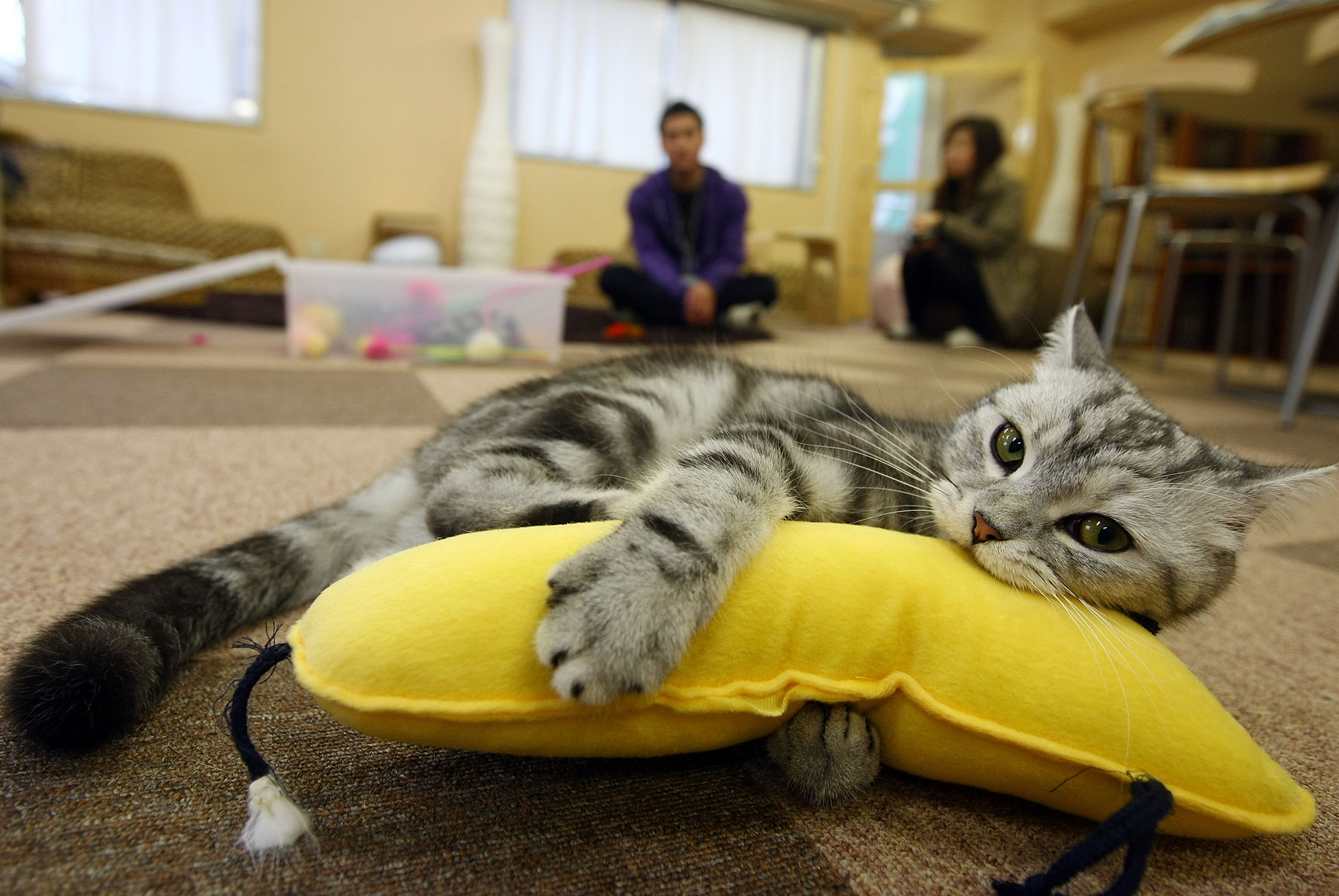