Minnesota and North Dakota are two of America's best-educated states. Here's why.

Share All sharing options for: Minnesota and North Dakota are two of America's best-educated states. Here's why.

If you want to find the best-educated young adults, head to Massachusetts — or North Dakota.

A new report from the Lumina Foundation shows the latter state comes in fourth when ranked on the proportion of young adults with at least a two-year degree college degree,.

About 52 percent of Massachusetts residents had at least an associate degree in 2012, the highest proportion in the nation. Minnesota comes in second, with New York and North Dakota close behind. 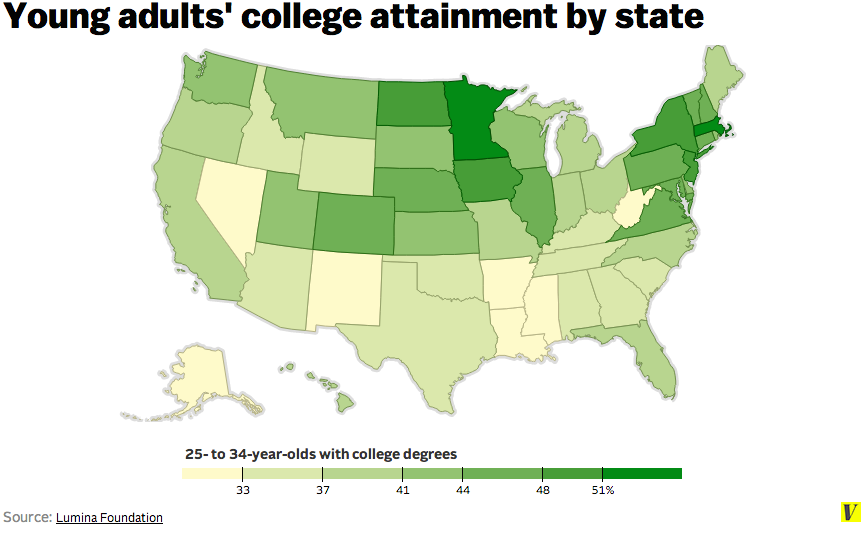 New York and Massachusetts might be self-evident. But what's going on in the upper Midwest? (Iowa ranked sixth, just behind No. 5 New Jersey.)

States that rank highly are either producing a lot of college graduates of their own and keeping them in-state, or they're attracting degree-holders who went to college elsewhere. Either way, they're well-positioned for the future of the economy, says Dewayne Matthews, a vice president at the Lumina Foundation, a nonprofit working to boost college attainment in the US.

Minnesota and North Dakota are perennial overachievers, Matthews says. "It is by all accounts cultural,"  he said. "These communities have traditionally placed a huge value on education, stressed education. And so this has always been the case." Both states have strong high school graduation rates, high confidence in public schools in the state, and high college-going rates for high school graduates.

Minnesota, North Dakota, and Iowa had the highest proportion of residents saying K-12 education was "excellent" or "good." North Dakota is pouring money from the natural gas boom into its state higher education system. All three states also have strong economies — they rank in the top 10 nationally on Gallup's job creation index — and relatively low unemployment rates, factors that lure educated young workers from elsewhere.

One thing the states with the best-educated young residents have in common: they're states where jobs in health care and related fields, as well as science and technology, are growing quickly.

But don't discount agriculture, Matthews says. "You go into a place like Iowa and those farmers all have college degrees," he says. "You can't do well without one."