Is Ukraine heading for civil war? We asked one of the world's leading experts.

Share All sharing options for: Is Ukraine heading for civil war? We asked one of the world's leading experts.

Is Ukraine slouching toward civil war? There's real concern that Ukraine could split between government forces and pro-Russia militias, some of whom have already seized government buildings in eastern Ukraine. This would be a nightmare — civil wars tend to be long, bloody, and devastating for their host countries.

Fortunately, that isn't happening yet — and, according to one of the leading scholars of warfare, probably won't. "I think it is important to start out by saying that what we're seeing here is not a civil war," Stanford University professor James Fearon told me. "Rather, it's a land grab by President Putin that's boosting his popularity at home."

Fearon would know. He's one of the premiere experts on the statistical study of war and civil war: what numbers can tell us about how people hurt each other, basically. He and I spoke over the phone about what this research can tell us about the chances of war in Ukraine, whether Russia will invade, and what Vladimir Putin's hoping to get out of all of this. What follows is a transcript of our conversation, edited for clarity and length. 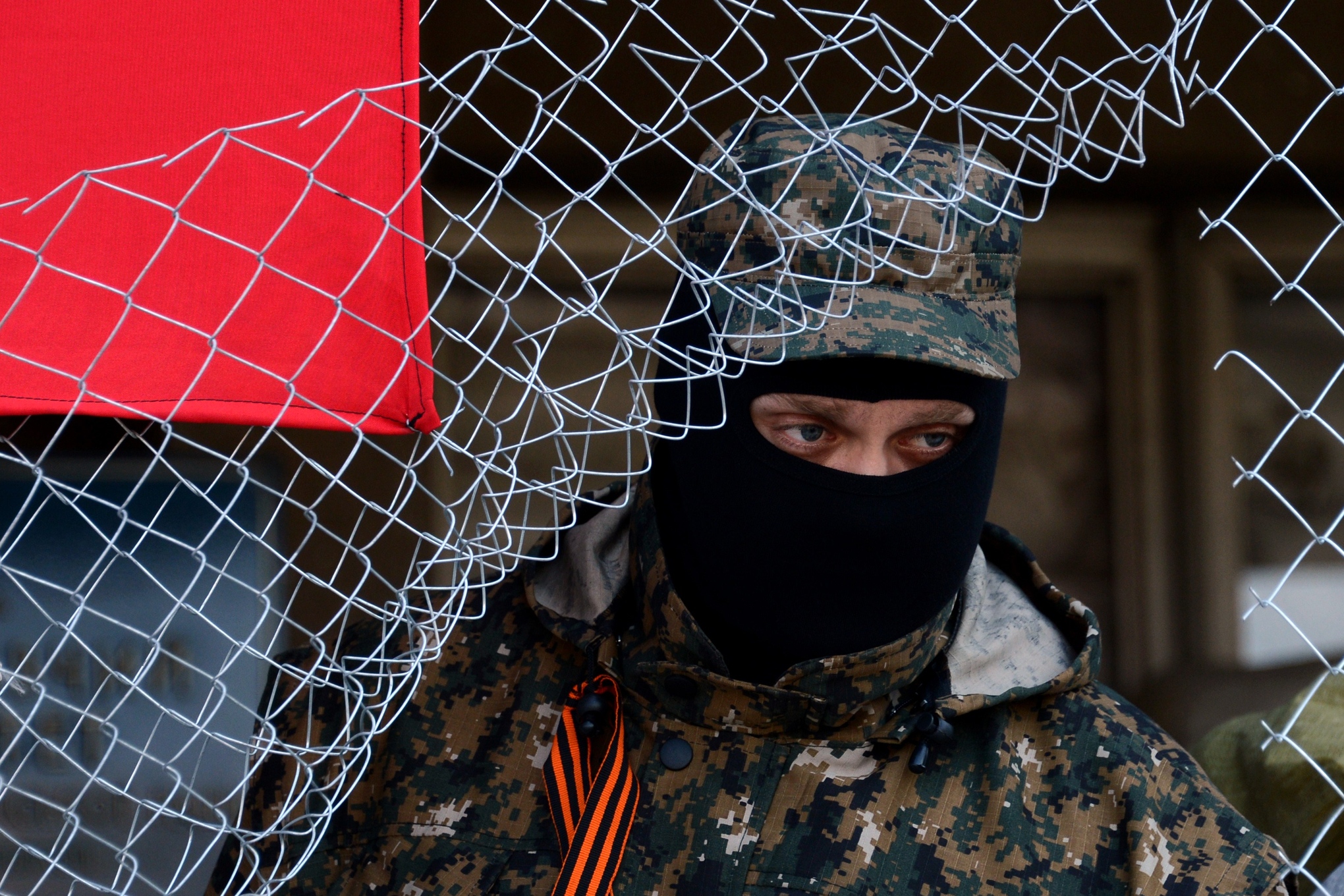 A condition for war is that you have two sides fighting, and it has to get to some threshold amount of magnitude. If two people get in a fight with political aims, and they kill each other, no one's going to say that's a civil war, right? And although just what the threshold ought to be is, at the end of the day, somewhat arbitrary, there's no way this one gets to anyone's definition for civil war.

ZB: But you did say there were some interesting things that you could learn from the research on civil war about this conflict?

JF: First of all, there's a strong tendency to view civil wars as domestic politics problems but, in fact, many or maybe even most civil wars have a big dimension of international politics by other means. In other words, a big part of what we call "civil wars" is really being driven by an international conflict being played out through proxies. Disguised soldiers from another country [for example], as appears to be the case here.

There just isn't much evidence right now that, at the core, this is a conflict between Ukrainians

This is, in a way, what we're seeing in Ukraine with the revolution that got rid of [former Ukrainian President Viktor] Yanukovych leading to a takeover by a government that Easterners and Crimeans were quite suspicious of. And also weakened the capabilities of [the Ukrainian] state. You saw a lot of the same thing with the end of the Soviet Union. There was a shock to the capabilities of all of the post-Soviet states and you saw civil wars.

ZB: Got it. But despite a number of these different factors being present in Ukraine, you said that likelihood of serious civil conflict is fairly low. Why might that be?

JF: What we're seeing is not so much civil war as an intervention by a very powerful neighbor who's interested in annexation, but now there's an interesting question as to what's sort of path there will be towards actual annexation or will they be content with something formally short of that. 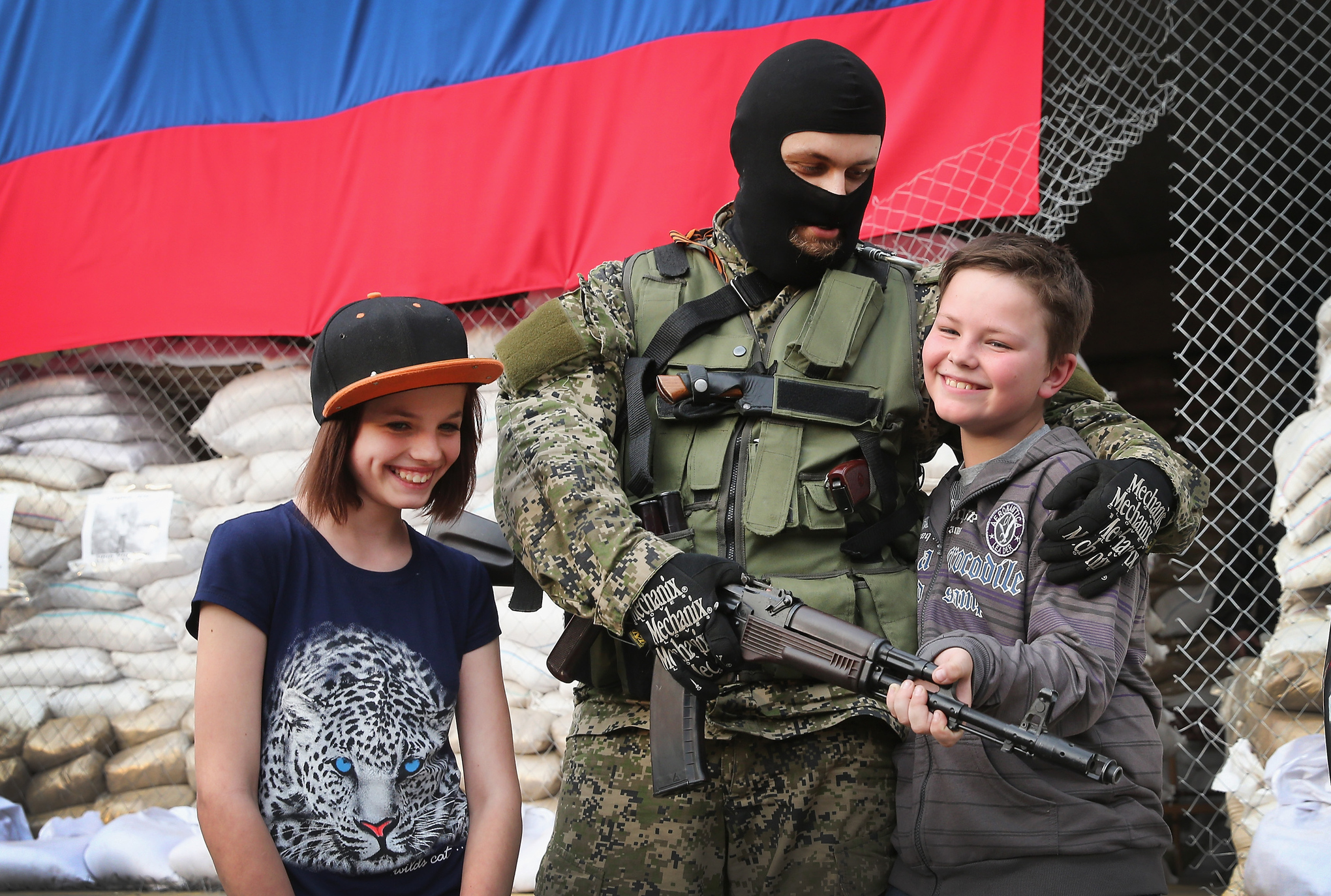 A 12-year-old boy and girl pose for a picture with pro-Russian militant outside the city council building on April 21, 2014 in Slovyansk, Ukraine. Scott Olson/AFP/Getty Images

The Russian Army is so strong that, relative to anything Ukraine could put up against them, I don't see them starting a war against the Russian forces. And since that appears to be who's there in the east, I don't see what the fight would be.

If [Putin] extends this program further west, you could imagine the development of a terrorist or violent guerrilla movement that could someday get to civil war levels. There just isn't much evidence right now that, at the core, this is a conflict between Ukrainians.

Let's focus a little bit on Russia's thinking here. Is Putin just trying to expand Russia, or are there other motivations going on? Is there a good base of evidence to understand what's going on in this case?

I'm myself partial to thinking this is not so much what realist writers, or people who describe themselves as realists, are saying: that losing Ukraine is posing a military threat to Russia. But rather that this has a lot more to do with Russian domestic politics. Putin's kind of ultimate insecurity as an autocratic leader there.

There's a rich tradition going back to even writing after the First World War of people writing that [autocratic or semi-autocratic] regimes are particularly prone to foreign policy adventurism as a form of diversion or diversionary war, to increase their domestic popularity.

I'd have to say that the research on this is not conclusive, and some people even argue that it's hard to find really clear-cut cases of diversionary conflict. It's also worth saying that it's not as if Putin was in big domestic trouble at the start of this.

So what makes you partial to the diversionary war hypothesis?

I think that Putin has, for years now and increasingly over the last couple years, acted in ways to suggest that he's very worried about a large-scale domestic mobilization against him and his regime. 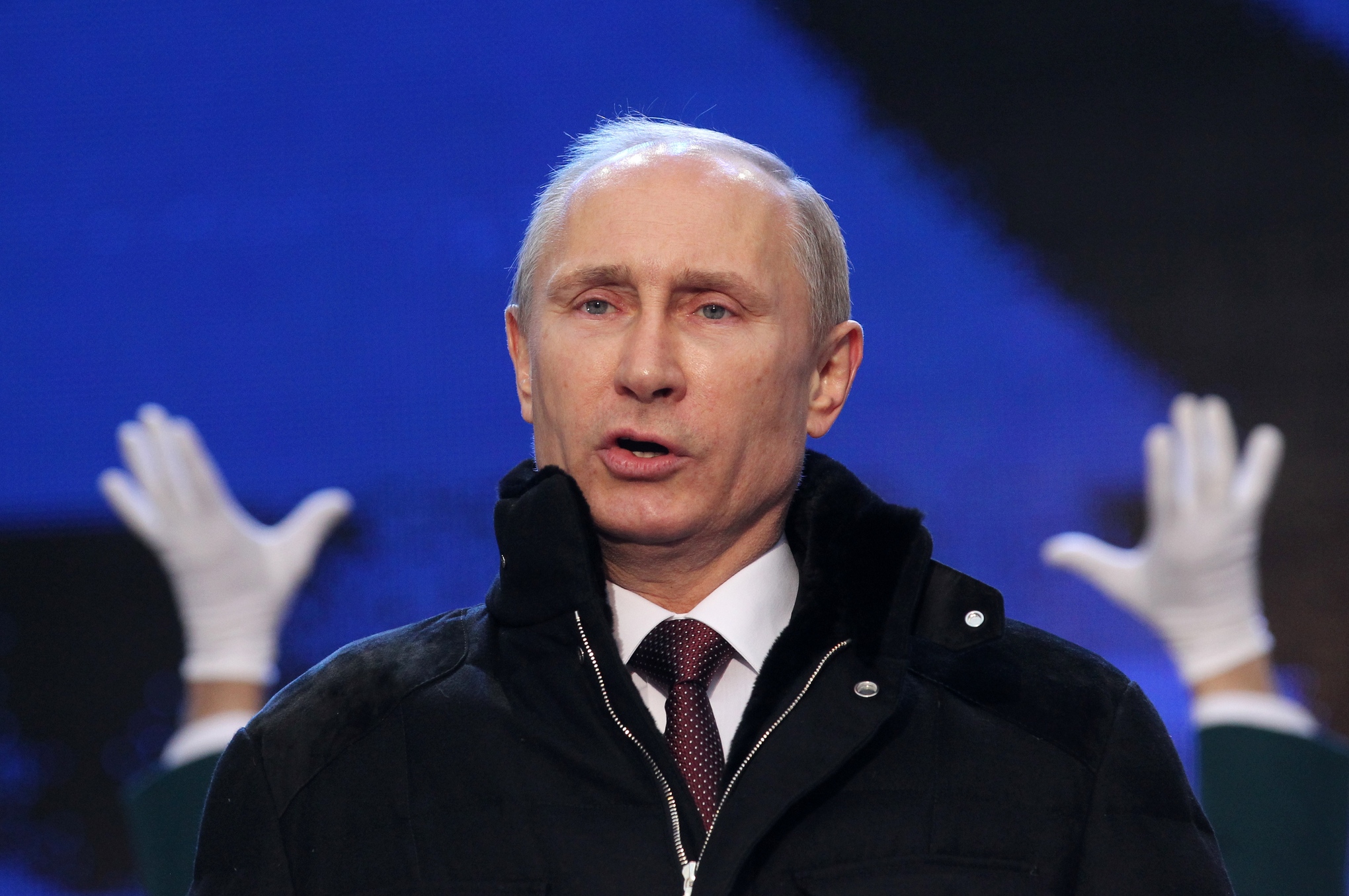 What's probably freaking him out is that he genuinely thinks the US in particular wants to put in place a regime in Kiev that would be, from his perspective, a dangerous demonstration - the kind of thing that happened to Yanukovych is the kind of thing he doesn't want to see happen to himself.

It's hard for me to imagine that he's worried that we're going to be stationing troops there and invading Russia. No. We're not in that world anymore. We're in this nuclear world where great powers don't really need to worry that they'll be invaded by tanks from another great power.

Is there anything else that you think is important that we haven't talked about?

If you were going to say what other cases of internationalized civil war look like this or seem relevant, I think the one that I haven't seen much discussed but is quite relevant would be Yugoslavia in ‘91-92.

In particular, the case of the war in Croatia, where Milosevic and Serbia sidelines a bunch of moderate Serbs in the Krajina region in Croatia and replaces them with a more extremist group of secessionists who then foment and pursue war against this new Croatian government. They then proceed to ethnically cleanse that region, and you have a quite big war. Then — it's somewhat similar, with some differences — the same thing happens in Bosnia. 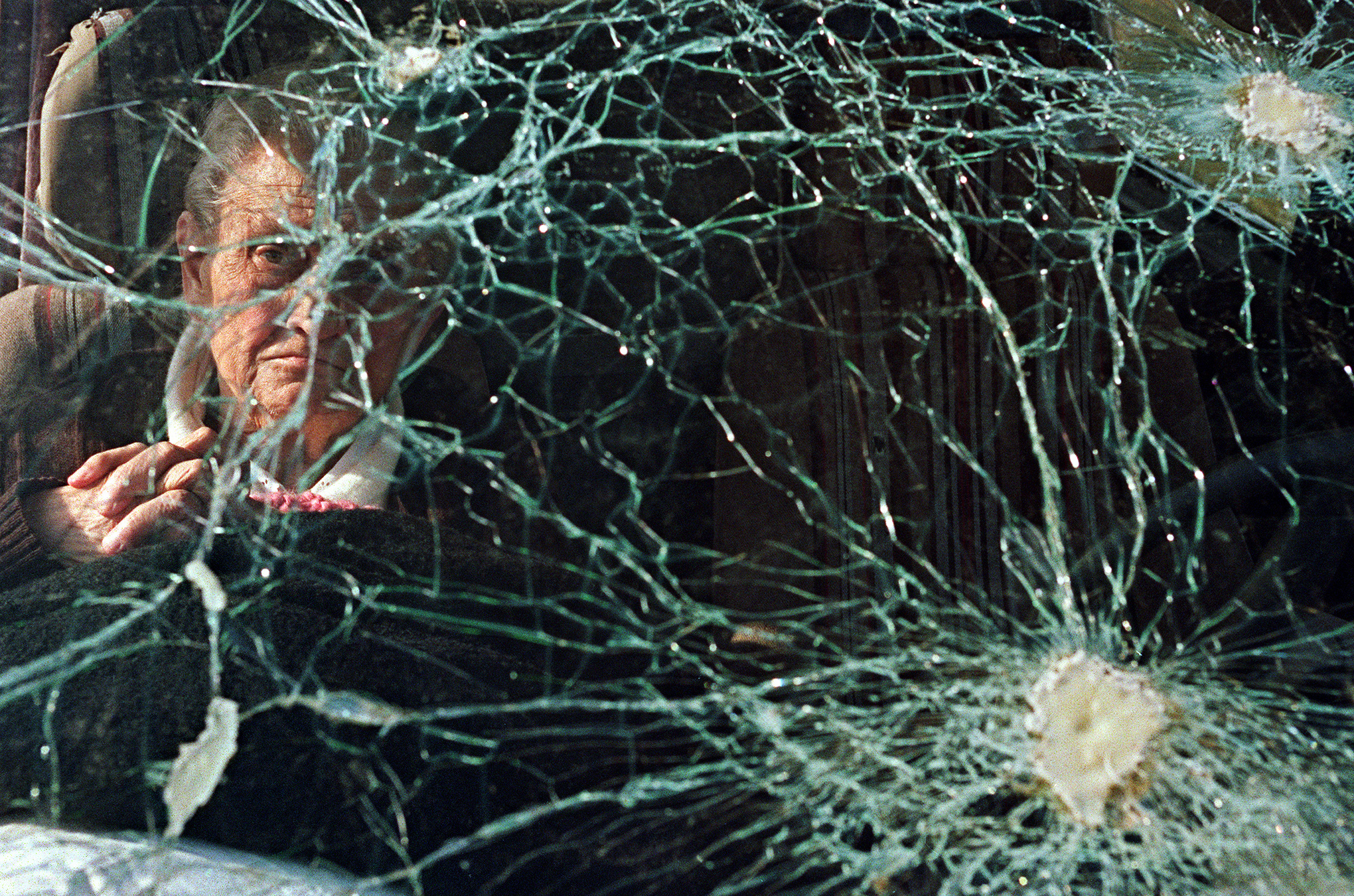 Those are cases with Milosevic in the position of Putin, sending what were in some cases Serbian or former Yugoslav Army units pretending to be, in Eastern Bosnia, Bosnians. So there's a lot of similarities there.

Why did that one get really violent  — incredibly violent — whereas I don't think anything like it will happen in Ukraine? It's the power differential. Serbia was not the power, relative to Croatia, that Russia is to Ukraine. If things really polarize over a period of time, maybe. But it seems really unlikely, because it seems like the ethnic divides are different [in Ukraine] and a lot fuzzier.