If people can get health insurance without a job, they're likelier to stop working. And that means Obamacare might encourage people to retire earlier, according to a new study.

Stanford University and American Enterprise Institute researchers found public employees are between 26 and 38 percent, depending on age, more likely to retire earlier if retiree health plans are available. By extrapolating those findings to the health-care law, researchers concluded that more Americans might move to reduce their workload — by not working or moving to part-time — before they turn 65, when Medicare becomes available regardless of employment.

The idea: Some people stay at work for health insurance

Some people continue working later in life, particularly into their 50s and so forth, because a full-time job normally comes with health insurance. This is called job lock, and supporters of universal health care see it as a really big downside to the US system of employer-provided health insurance.

Some employers, particularly in the public sector, offer retiree health plans that let employees retire before 65 while keeping some sort of health insurance. Researchers, by combing through various data sources, wanted to see whether these retiree health plans give employees an incentive to retire earlier and how many employees take advantage of the opportunity.

Researchers found that those between the ages of 55 and 59, after controlling for various socioeconomic variables, are more likely to switch to part-time work or quit working entirely if retiree health plans are available. 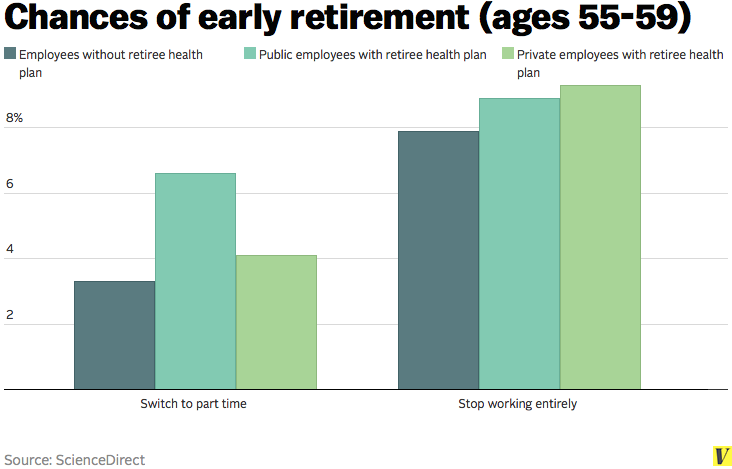 And there were similar differences for those aged 60-64. 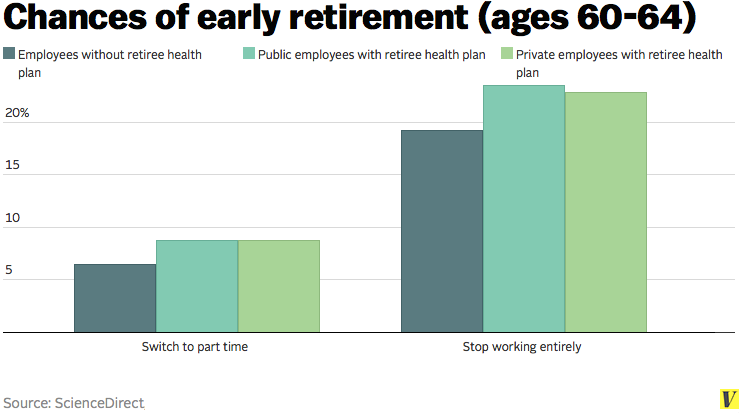 What does all of this have to do with Obamacare?

There's some precedent for this idea. The Congressional Budget Office in a previous report projected Obamacare will reduce total hours worked in the US by 1.5 to 2 percent between 2017 and 2024.

Obamacare has the potential to reshape the public sector's retiree benefits, since people can now shop for more options on the exchanges. Some cities and states are now exploring whether they can move retirees to Obamacare's marketplaces — and older workers might not move into the public sector as frequently as they do now, if they know they can get similar health benefits elsewhere.

Limitations of the study

The study doesn't look directly at Obamacare. It instead extrapolates its findings for retiree health plans to the health-care law. It's possible, however, that Obamacare might not lead people to retire earlier: perhaps Americans won't find the health plans available through Obamacare affordable enough.

The study also doesn't account for differences in retiree health plans. Some plans have higher costs for the insured, while others are far more generous and provide more coverage. It's unclear, based on this study, how less generous retiree plans impact employees' early retirements. But researchers conclude their findings still apply in the big picture.