How male superheroes got jacked: a photo investigation

Share All sharing options for: How male superheroes got jacked: a photo investigation

The opening scene of Captain America: Winter Soldier features a pore-less Chris Evans running laps around a very-fit-in-his-own-right Anthony Mackie. The crew stuck Evans in a constricting Under Armour shirt, highlighting the monumental difference between these two men's physiques as the shirt struggled to hold all of Evans's impressive muscles in the right place.

Bigger, faster, stronger— there is an arms race for Hollywood's A-List actors to become more sinewy and more muscular than the heroes before them. "[O]bjectification makes no gender distinctions: Male actors' bare asses are more likely to be shot in sex scenes; their vacation guts and poolside man boobs are as likely to command a sneering full-page photo in a celebrity weekly's worst-bodies feature, or go viral as a source of Web ridicule," writes Logan Hill in the May issue of Men's Journal. We are at a point of no return, Hill argues, when it comes to actors' bodies. Now, actors have to push themselves to dangerously low levels of body fat and extreme levels of fitness if they want to be a superhero.

"A mere six-pack doesn't cut it in Hollywood anymore. Today's male stars need 5 percent body fat, massive pecs, and the much-coveted inguinal crease – regardless of what it takes to get there," Hill writes.

Googling "inguinal crease" is a great way to induce a panic attack and/or body dysmorphia. But Hill has a point. I went through the completely painful task of looking at few popular superheroes (an exception was made for James Bond) from back in the day and now and compared the results:

1978: Superman (from an interview with Christopher Reeve about his workout)

And there'll be more where these guys came from ...

Marvel has re-defined the art of the superhero franchise when it created and cashed in with The Avengers.  The movie ended up making over $1.5 billion in theaters worldwide. That’s nice for Marvel, which will continue to make Avengers movies until Chris Hemsworth’s biceps have biceps.

But what the Avengers’ success did was put the heat on other studios to up their superhero game and try to emulate that success. In what seemed like days following the release Man of Steel, DC was already talking about the sequel which promises to feature Batman, Wonder Woman, Jason Momoa (Khal Drogo on Game of Thrones), and possibly a bevy of other brawny heroes and villains from the DC universe.

Staring down the pipeline: Avengers: Age of Ultron, The Fantastic Four, Guardians of the Galaxy (featuring the very ripped Chris Pratt) as well as the third installments of Thor and Captain America are all on the way too. More superhero movies on the way means more superheroes, and more superheroes means more actors wanting to get on the A-list and in these movies, likely by beefing up.

Speaking of the third Thor and Captain America, the multi-film contracts that Chris Evans, Chris Hemsworth, and Henry Cavill (Superman) also ensure that the characters they play will be looking the same, if not bigger, in subsequent films.

What you can’t forget about all these movies and their blockbuster dreams is that their source materials are comic books which are not only fictional, but also include aggressively-exaggerated depictions of male and female physiques.  Look at this iteration of an X-men team: 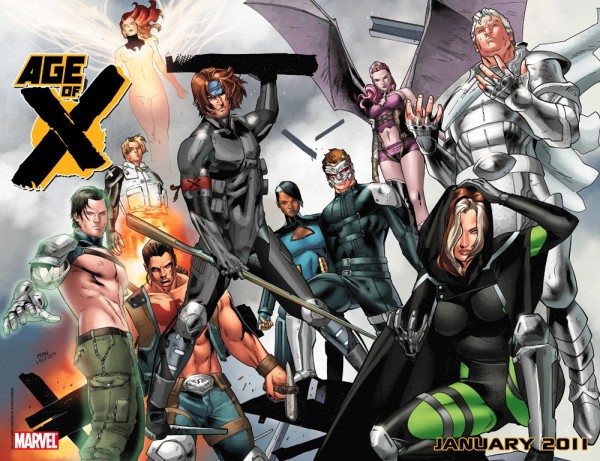 The man on the left (his name is Hellion and he is a mutant) has what looks to be a 50-inch chest plopped on a 28-inch waist (with an inguinal crease),

And super strength is the Honda Civic of superhero powers...

It's everywhere.  Super strength is one of the most common powers in the comic book universe. There is a boatload of Avengers not yet on the silver screen who can punch through a brick wall. And super strength also happens to be one of the easiest things depict in a movie, because, well, muscles.