Share All sharing options for: Obamacare’s Medicaid expansion just got cheaper for states

The price tag for Obamacare's Medicaid expansion is shrinking.

The Congressional Budget Office cut significantly the amount it expects states would need to spend to grow the public program. It now projects that states would need to increase their Medicaid spending by 1.6 percent over the next decade to foot the bill for millions of new enrollees.

That's one-third less than the forecasting agency projected back in February, according to the Center on Budget and Policy Priorities, which first noticed the revision. And CBO now expects states to spend an additional $46 billion on Medicaid, over and beyond the $2.9 trillion they would have spent regardless of the health overhaul. 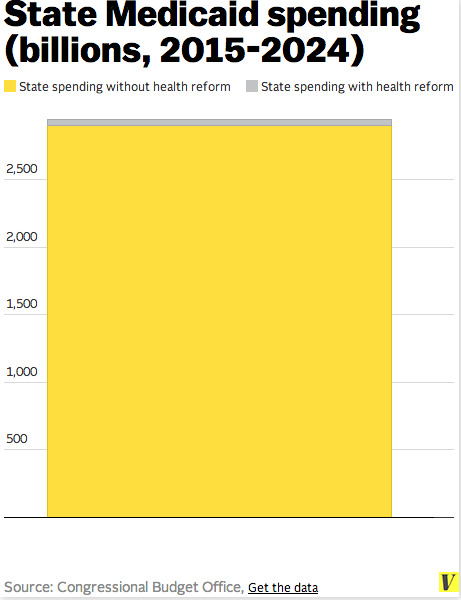 What accounts for the change? CBO lowered its projections for how many people who were previously eligible for Medicaid – but not enrolled – would sign up because of the flurry of public attention around health care. This is something that health policy experts call the "woodwork effect:" already-eligible people coming out of the woodwork to sign up for the coverage they had, for one reason or another, never taken advantage of.

The woodwork effect has worried state budgeteers: while the federal government pays nearly all the costs for people who are newly-eligible for Medicaid under Obamacare, it pays a much lower portion of the costs for people who qualified prior to the overhaul. And that leaves states with a bigger chunk of the bill to cover – one reason some states have hesitated to expand the public program.