Overfishing has wiped out 96 percent of Pacific bluefin tuna

Share All sharing options for: Overfishing has wiped out 96 percent of Pacific bluefin tuna

The Pacific bluefin tuna has fallen to historically low levels in recent years — a victim of heavy fishing and Japan's boundless appetite for sushi.

A new assessment published Monday estimates that bluefin tuna numbers in the northern Pacific Ocean are still 96 percent below their historic baseline — the same as last year. (This number was pointed out by Amanda Nickson, director of global tuna conservation for the Pew Charitable Trusts.)

What's more, the assessment notes, the vast majority of Pacific bluefin tuna now being caught are under the age of two — suggesting that many tuna are being fished before they have the chance to reproduce.

The Pacific bluefin tuna — prized for its tender red meat — has never been considered an endangered species, unlike its counterpart in the Atlantic Ocean. But, Nickson argues, data from recent years points to the need for serious conservation measures in the Pacific — and soon. "This is a textbook example of what happens when fishing nations turn a blind eye to decades of severe overfishing," she noted.

Why the Pacific bluefin tuna is vanishing

There are three main species of bluefin tuna in the world: the Atlantic, the Southern, and the Pacific. The first two are officially listed as endangered species. The Pacific bluefin, by contrast, has received far less attention — in part because it wasn't even recognized as a distinct species until 1999.

Yet Pacific bluefin tuna have long been fished heavily at all stages of their lives. The tuna start off in spawning grounds near the coast of Japan and then make the multiyear journey across the Pacific to the Baja California coast in search of food. Fully grown fish can weigh up to 1,000 pounds:

About 80 percent of Pacific bluefin tuna are caught for use in sushi restaurants in Japan, where a single large fish can fetch tens of thousands of dollars on the open market. In 2013, one tuna was auctioned off for $1.7 million — this year, the top price was a relatively paltry $70,000.

Not surprisingly, Japan leads the way in catching bluefin. But Mexico's industry has expanded in recent years as fishermen try to catch the larger bluefin that make it east: 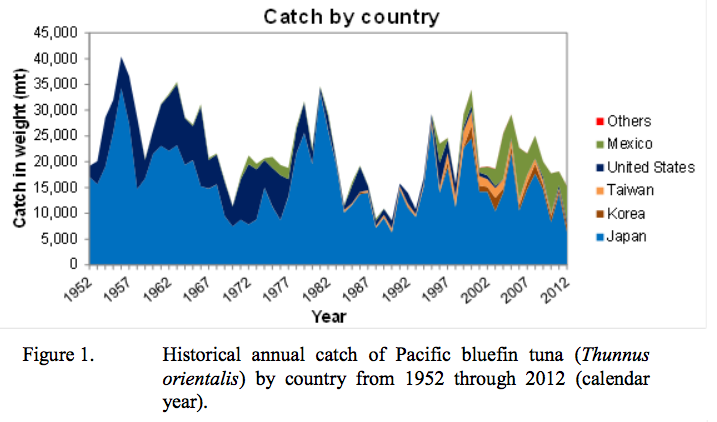 At the moment, there are relatively few restrictions on fishing for Pacific bluefin. Catch limits in the eastern Pacific were first imposed in 2012, but those were set higher than conservation groups think are needed. In the crucial western Pacific, meanwhile, near the tuna's spawning grounds, there are no overall catch limits at all — instead, countries are allowed to self-regulate.

As a result, Pew notes that fishing in the western Pacific has actually increased in recent years — even though current management measures call for a decrease back to 2002-2004 levels. Fishing activity near the spawning grounds put those younger fish at particular risk.

Could the Pacific bluefin tuna ever recover? 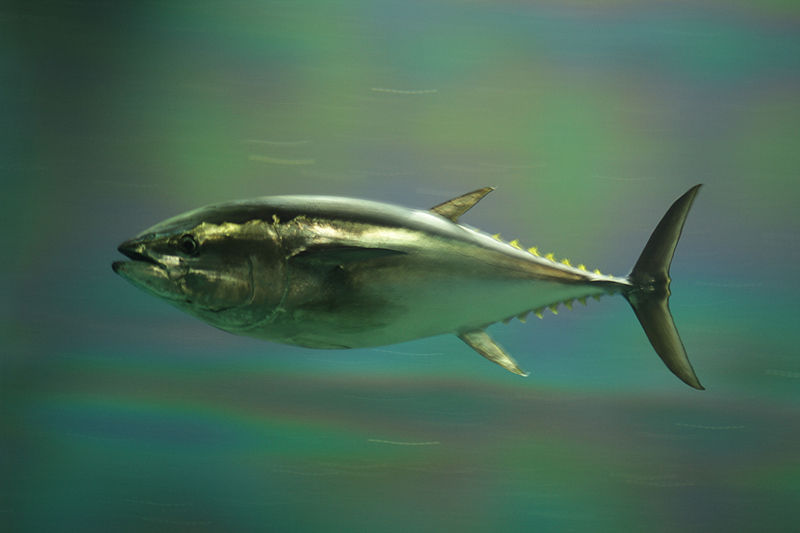 Conservation groups have called for two things to protect the Pacific bluefin: harder limits on overall catches in the Pacific Ocean and a minimum size limit on catches to protect juveniles.

There's some early evidence that stricter catch limits could work. Out in the Atlantic Ocean, heavy fishing caused the bluefin tuna population to drop 60 percent between 1997 and 2007. In response, the International Commission for the Conservation of Atlantic Tunas (ICCAT) recently imposed much stricter overall limits on catches and cracked down on illegal fishing.

The results? In 2012, the population of bluefin tuna in the eastern Atlantic and the Mediterranean Sea appears to have rebounded slightly. (ICCAT is planning to keep the quotas in place for the time being, though some conservation groups have called on the organization to go even further and implement electronic tracking mechanisms to thwart illegal fishing.)

A second idea is to prevent fishermen from catching smaller juveniles — in order to give them a chance to reproduce. One recent analysis suggested that a one- to three-year moratorium on catching very young fish could allow the Pacific bluefin population to rebound — within a few years, fisherman might even be able to catch more fish than they can today. But, in the short term, countries would have to take a hit, particularly Japan.

Both of those measures would be fairly novel steps. For a long time, the Pacific bluefin tuna was lumped in by ocean managers with all the other fish in the ocean (the bluefin represents just 1 percent of all tuna caught in the Pacific). Now that the numbers have plummeted, it may be time to rethink that. Here's a longer primer on the topic.