Bad news: you probably have herpes and don't know it

Share All sharing options for: Bad news: you probably have herpes and don't know it

Yes, I'm talking to you. About 70% of Americans ages 14 to 49 have herpes, that is either the HSV-1 or HSV-2 versions. These viruses used to be clearly demarcated as oral and genital herpes, but these days it's clear that both can cause both types of infections.

Genital herpes is one of the most stigmatized of STI's, and it's far more common than most people think. But learning that you have it might just cause you more social harm than actual good. It's something that experts love to debate. Here are four facts you probably didn't want to know about herpes.

1. There's a good chance that you have herpes 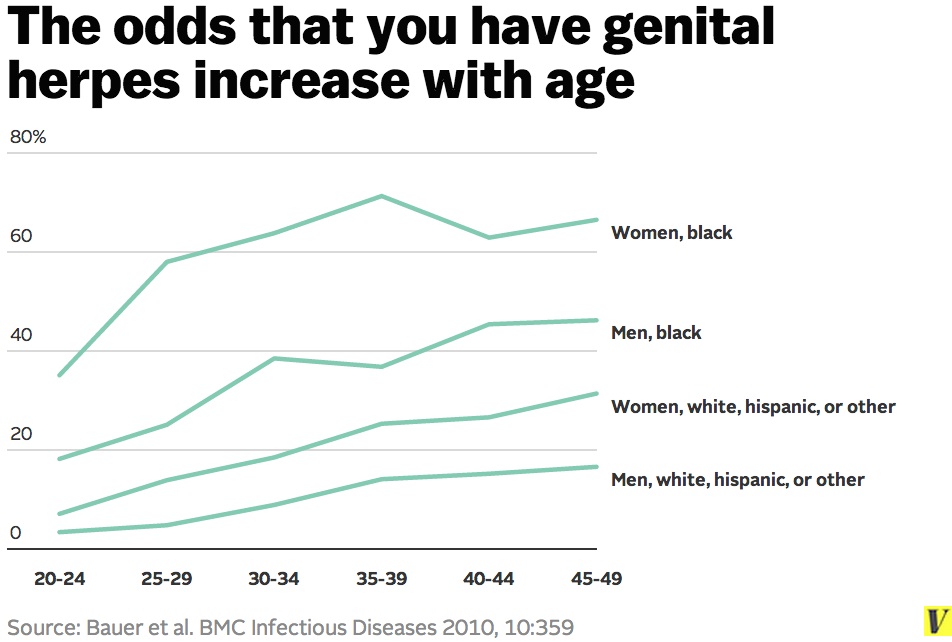 If you catch chlamydia or gonorrhea, you can have it treated with antibiotics and it will go away. However, there is no cure for herpes. So once someone has it, she has it for life. Over an entire population, the cases just add up over time. This means that middle-aged adults have some shockingly high herpes rates. For example, 50 to 70 percent of single women aged 45 to 50 have herpes. (By the way, the chart above is for herpes simplex virus type 2 (HSV-2), aka genital herpes. The other type is "oral herpes," HSV-1, although both viruses can infect people in both, um, places.)

2. There's an even higher chance if you're single 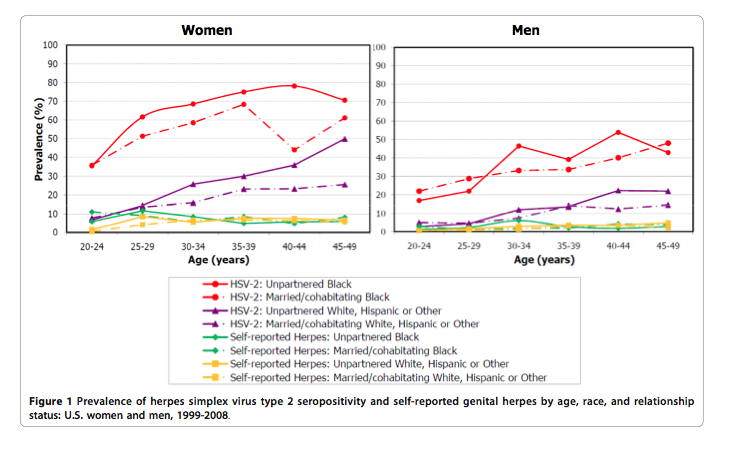 Maybe this isn't so surprising. But if you are single, you might want to take a look at the graph above. The red and purple are actual herpes rates. The solid lines are single people, and the dashed lines are people who are married or cohabiting. It's from this paper.

3. If you have herpes, you probably don't know it 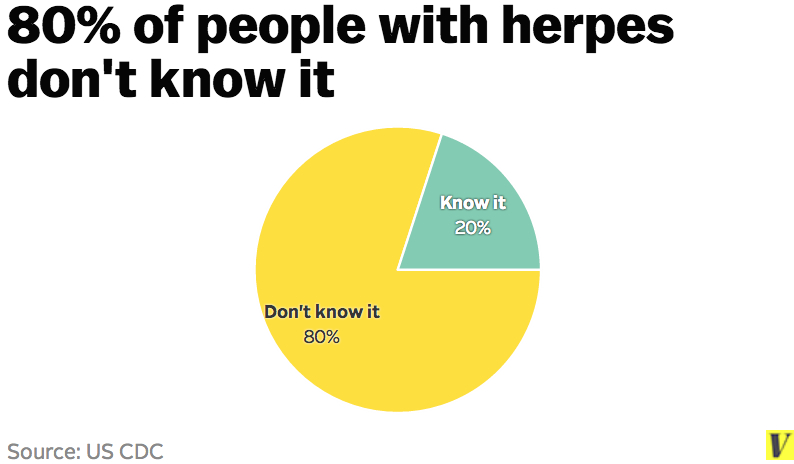 Most people infected with herpes don't ever have symptoms. And most routine STI testing doesn't look for herpes, either. What? Yes. So that's why most people don't know that they have it. (The graph above is for HSV-2.)

The US Centers for Disease Control and Prevention's guidelines say it loud and clear ("CDC does not recommend screening for HSV-1 or HSV-2 in the general population").

For the majority of people with herpes, the infection causes them no physical problems, and there's nothing they could do to cure themselves if they found out that they had it. So a positive diagnosis is of limited utility. The CDC's reasoning? ''It is not clear whether knowledge of a herpes diagnosis improves the health of people taking the tests and reduces spread of HSV in the population."

people with herpes but no symptoms can still spread the virus

But some public heath professionals disagree with these recommendations. It's important to note that people with herpes but no symptoms can still spread the virus to other people. And their risk of contracting HIV is two times as high as those who don't have herpes. (Herpes can help HIV sneak into the body even when there's no noticeable symptoms.)

(Still scared? Here's how to protect yourself from getting herpes.)

Update: I added information about how the majority of Americans are infected with herpes viruses.