Share All sharing options for: The federal government's absurd restrictions on medical marijuana

More than 30 percent of Vietnam veterans and as many as 20 percent of Iraq and Afghanistan veterans suffer from post-traumatic stress disorder (PTSD). Sue Sisley, a doctor and researcher at the University of Arizona, thinks that marijuana could help them — perhaps in a very big way. But at times it seems like every level of government is trying to stop her from proving — or even disproving — her ideas.

Sisley is in the middle of a multi-year process to get approval for her medical marijuana research, which would evaluate marijuana as a treatment for PTSD. It's been nearly four years since Sisley developed her study plan, and at least one and a half of those years have been stalled by federal reviews of her study.

Sisley is not alone — despite some evidence that marijuana could treat various medical problems better than conventional medicine, including pain, nausea and loss of appetite, Parkinson's disease, inflammatory bowel disease, PTSD, and epilepsy. But the federal government continues treating marijuana as a drug with little to no medical value. And that, researchers argue, is restraining marijuana from reaching its full medical potential. 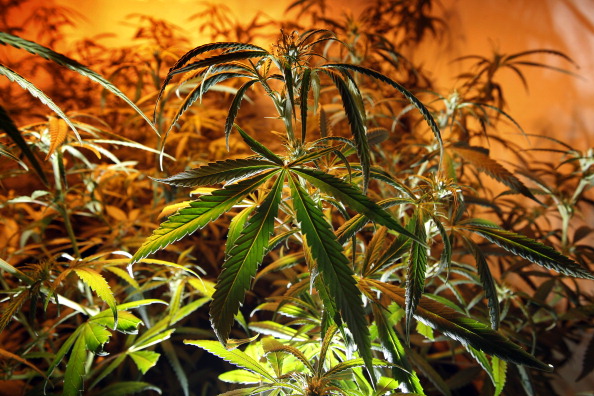 Sisley first conceived her study nearly four years ago. The idea was to try treating military veterans suffering from PTSD with different strains of marijuana to see which one would be more effective, or if marijuana is effective at all in treating PTSD. For many of these veterans, marijuana will be a last resort: the study encourages participants to seek out conventional treatments first.

But Sisley quickly found out she — and other medical marijuana researchers — would need to get three major approvals to obtain marijuana from the National Institute on Drug Abuse (NIDA), since the agency holds a monopoly over legal marijuana supplies in the US. For other medical drugs, testing would typically move forward after Food and Drug Administration (FDA) approval.

For Sisley, the first major hurdle was the FDA, which reviews the country's drugs for efficacy and safety. Putting together a study for using marijuana as a medical drug requires their assent. That approval took about six months, according to the study's timeline.

The next major obstacle was the Public Health Service (PHS) review. All independently funded medical marijuana studies must go through PHS, while publicly funded studies go through other avenues in the National Institutes of Health. It took two applications and nearly a year of reviews, spaced out over three years, for Sisley to get approval from PHS.

"Marijuana is the only schedule 1 drug that has the second, redundant review required by the Public Health Service," Sisley explains. "It's inexplicable and indefensible."

The last major step for Sisley is a sign-off from the Drug Enforcement Administration (DEA) so she can obtain her schedule 1 license. Under DEA guidelines, schedule 1 drugs like marijuana are considered the most dangerous and least medically valuable. The classification means the federal government considers marijuana more dangerous and less medically valuable than schedule 2, 3, 4, and 5 drugs like cocaine and meth. As a result, the DEA needs to verify marijuana can be stored safely before issuing a license for its study.

All of these extra steps come on top of traditional requirements for studies, including writing up a plan, fundraising, and finding a location — typically a lab in a hospital or university that requires another round of approval — for the study.

After the hurdles, researchers might not get the marijuana supplies they need

Even after all the hurdles, it's unclear whether researchers can obtain the marijuana strains they need to evaluate the drug.

Sisley says her study asks for different types of marijuana with very specific chemical make-ups. But there's a very real concern that NIDA might not be able to grow the type of marijuana she's looking for, based on Sisley and other researchers' correspondences with the agency.

That's why the nonprofit Multidisciplinary Association for Psychedelic Studies (MAPS), in its support for medical marijuana studies, has petitioned the federal government to allow research-bound marijuana from other sources. Sisley points to Lyle Craker, a professor at the University of Massachusetts in Amherst, as one potential grower, due to his expertise in plant, soil, and insect sciences and previous efforts to grow legal marijuana supplies for research.

When Craker in the 2000s petitioned the federal government to let him grow marijuana for medical research, the DEA said no. Craker at first intended to appeal the case and get a more favorable ruling once the Obama administration replaced the Bush administration. But the regime change didn't bring the policy changes Craker expected, and he subsequently lost in his appeal in 2013.

"It's too bad," Craker says. "What you're going to need to get any testing done is an entirely new philosophy from these agencies, and I don't know when that will occur."

There are ways to bypass some of the checks

Sisley, in theory, could have overcome the PHS check by getting public funding. But MAPS, the organization helping Sisley with her study, has been unable to secure public funding for a drug-development study.

Rick Doblin, president and founder of MAPS, explains that the one federal agency that could award funding for PTSD research — the National Institute of Mental Health (NIMH) — was only interested in studying how marijuana works as a psychoactive substance, not whether it works as a medicine, when Sisley developed her study. But that's now changed: earlier this year, NIMH announced it will expand the scope of research it funds. 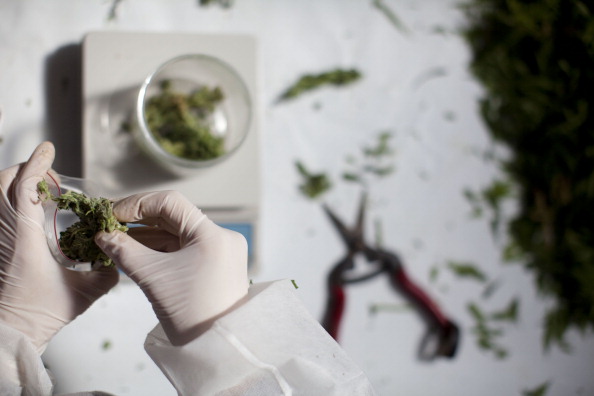 If only this research was easy. Uriel Sinai / Getty Images News

Doblin says MAPS is now working with NIMH to unlock some grant money for marijuana research, but that could come too late for Sisley's study.

There is another way to speed up research: state support. In California, the state government for a few years maintained the Center for Medicinal Cannabis Research (CMCR) to help researchers work through the federal government's regulatory processes. CMCR provided resources for the research, and it also handled applications through the federal government. With the support of a state government, CMCR could apply pressure on the feds to act quickly more than, for example, Sisley and MAPS can.

Sisley says having a state government behind her "would be the dream." But a bill in the Arizona legislature funding her research couldn't even make it through committee due to one senator's opposition. It seems unlikely, then, that a broader program like CMCR would get anywhere.

It's also true that, at least in Sisley's case, there was a notable time period — about two years — between MAPS's two applications to PHS. Doblin says he was waiting to see if Craker could win in his 2013 appeal to grow marijuana for researchers, which would remove the need for NIDA's supplies and, therefore, the PHS review. "Unfortunately, we lost that case," Doblin explains.

One researcher remembers when the process was even more difficult

Donald Abrams, a researcher based in the University of California in San Francisco, was one of the first to try to get legal marijuana supplies for medical research back in the 1990s. From Abrams's perspective, the process has gotten a lot easier in the past two decades.

From Abrams's perspective, the process has gotten a lot easier in the past couple decades

Back when Abrams first tried to get medical marijuana research going, the process wasn't formally set up like it is today. It took until 1999 for the U.S. Department of Health and Human Services set up the more formal PHS review process for independently funded research.

That made the process much harder for researchers. Abrams says back then he was consistently refuted by NIDA, which cited a congressional mandate to study drug abuse, not the medical value of illicit drugs.

Abrams's personal experience seems to back that up: he recently obtained federal funding for a study into marijuana's effects on sickle cells, although he still needs to get his schedule 1 license for the study to move forward.

But researchers want even fewer barriers to their studies 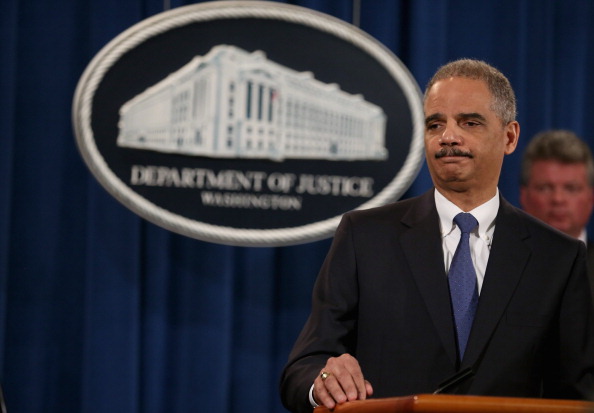 Even though it's easier than it used to be, Abrams acknowledges that the process is far from ideal. Abrams cites multiple barriers that he had to go through for his study, and even now he's waiting for the DEA to approve his schedule 1 license.

"As long as it's schedule 1, there are barriers we have to overcome to study it," Abrams says.

"As long as it's schedule 1, there are barriers we have to overcome to study it"

As Abrams notes, part of the problem is the DEA's scheduling. Medical professionals in general disagree that marijuana deserves to be classified as one of the most dangerous illicit drugs, and it's difficult to imagine any poll in which the public would say that marijuana is more dangerous than cocaine or meth.

The gap between the DEA's classification and researchers' opinions has driven some organizations to call on the Obama administration to reschedule marijuana. The Epilepsy Foundation in particular asked the DEA to reschedule the drug to make research easier.

The scheduling could change if either Congress or the White House takes action. Congress, for instance, could pass legislation putting marijuana on a less stringent schedule. And the White House, through the US attorney general and HHS, could begin a review process and unilaterally reschedule marijuana; that alone could remove barriers to medical marijuana research.

It seems unlikely the White House will act by itself, however. The Obama administration has consistently taken the position that it will work with Congress to reschedule the drug, but it will not move on its own.

"We'd be willing to work with Congress if there is a desire on the part of Congress to think about rescheduling," US Attorney General Eric Holder told The Huffington Post. "But I think I'd want to hear, get a sense from them about where they'd like to be."

For some critics, the worry is that opening the doors to medical marijuana, whether through rescheduling or other means, could act as a gateway to full legalization. But Sisley, exhausted of years of obstacles, says such claims are inaccurate.

"I've never even tried marijuana, personally, and I'm a lifelong Republican," she says. "I'm simply interested in the potential of this plant to reduce human suffering."