Share All sharing options for: Most Americans don't believe in the Big Bang — here's why they should

A recent poll asked 1,012 Americans about their confidence in different scientific concepts, and one answer in particular was pretty interesting.

When shown the phrase "The universe began 13.8 billion years ago with a big bang," only 21 percent of the respondents said they were "extremely confident" or "very confident" the phrase was true.

Out of five answers, "not at all confident" garnered the highest response, with 30 percent. 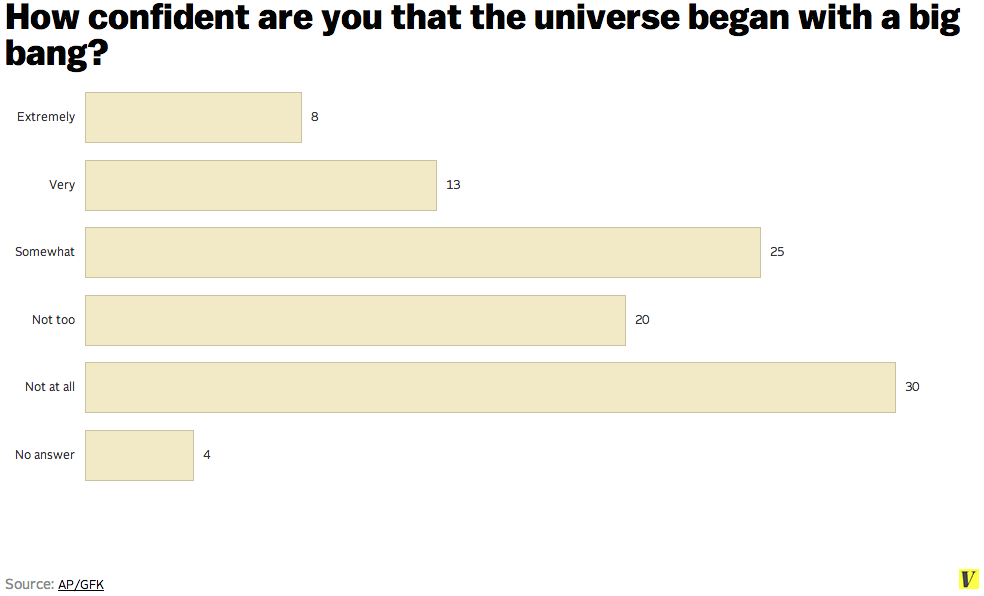 The level of confidence in the big bang was the lowest for any question on the list — one that also included questions on climate change and evolution.

Why were so few people confident in the Big Bang theory, a concept that serves as the bedrock for scientists' understanding of how the universe formed?

Over at the Atlantic, Alexis Madrigal parsed the question, and came to the conclusion that some respondents disagree with the theory for religious reasons, while others are simply uncertain about the current science, and are scared of saying they're "confident" in an incorrect answer.

For both groups, a refresher on how we actually know the Big Bang happened might be useful.

Here's the proof we have that the Big Bang occurred

The Big Bang — a rapid expansion of all the universe's matter from a single point about 13.8 billion years ago — is predicted by theoretical physics, a field that uses math to create consistent theories that explain the physical world we see around us. As early as the 1920s, scientists working in this field invoked the Big Bang to explain the behavior of both tiny particles and distant galaxies.

In the decades since, we've collected several types of evidence that support the theory:

1) All the galaxies we see are drifting away from us. We can tell this because the light emitted by these distant galaxies that reaches Earth is redshifted (meaning that its wavelength is stretched, the same way an ambulance's siren is stretched to sound like a lower tone as it cruises away from you). The light from galaxies farthest from us is shifted the most, showing that the universe is still expanding in all directions, a result of the expansion billions of years ago.

2) We can see energy that's still radiating as a result of the explosion. It's called the cosmic microwave background, and sensitive telescopes can see the faint glow of this energy at almost equal levels in all directions.

This past March, researchers studying this radiation found evidence for distortions in the universe's gravitational field, likely the result of the especially rapid expansion of the universe in the moments just after the Big Bang.

When we've measured the amount of these elements (hydrogen, helium, and lithium), they match the predictions nicely.