Male doctors get $50,000 more annually from Medicare than female doctors

Share All sharing options for: Male doctors get $50,000 more annually from Medicare than female doctors

The gender wage gap is alive and well in medicine: male doctors earn an average of 24 percent more per patient through Medicare than female physicians, according to a new analysis of federal data.

The analysis from NerdWallet on Tuesday found the federal health-care program pays female doctors less than male doctors, even when comparing the exact same specialties. The difference might be a result of how Medicare awards physicians and male dominance in certain professions within the health-care system.

The idea: Male-dominated specialties and longer hours drive up pay for male doctors

This gender pay gap exists in health-care jobs, as well

The White House often cites the gender pay gap across the US economy: women, on average, make 77 cents for each dollar a man makes. This gender pay gap exists in health-care jobs, as well.

In terms of Medicare, NerdWallet points to two reasons to believe there's a discrepancy: Yale University researchers found male doctors tend to work more hours than female doctors, and women make up less than 10 percent of Medicare physicians in high-paying surgical specialties like cardiac, orthopedic, and neurosurgery. Taken together, the two factors mean male doctors could get paid more per hour for longer hours. 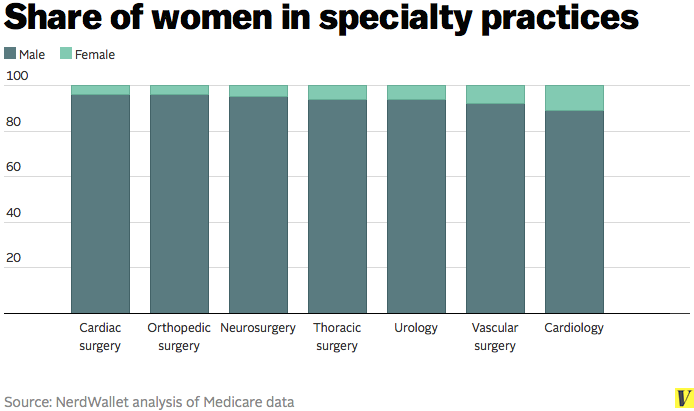 But this analysis from NerdWallet shows that even when you look at the exact same specialty — except for pathology, the one exception — women get smaller Medicare reimbursements per patient than men.

The finding: Male doctors will bill more services than females

doctors have a financial incentive to run up tests, treatments, and other services

Medicare pays most doctors for each service they provide, not the quality of health outcomes they produce. That means most doctors have an incentive to run up tests, treatments, and other services if they also want to run up their pay from Medicare.

NerdWallet found male doctors seem to take greater advantage of this. They charge for about 5.7 services per patient, while women charge for 4.7 services. And the variation seems to apply from specialty to specialty. 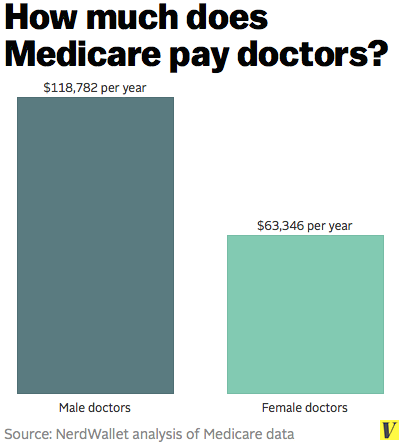 Limitations of the analysis

NerdWallet lists four major issues that could limit their analysis.

Medicare is only one part, albeit a major one, of the health-care system

For starters, Medicare payments vary across different places in the country. It's possible female doctors could live in areas of the country where pay happens to be lower.

Medicare also pays differently for each type of service provided, and it might be the case that female doctors provide services that tend to be cheaper.

It's also true the federal program typically pays less to doctors when procedures are done in a hospital instead of a clinic. If female doctors are more likely to be hospital-based, that could explain part of the pay gap.

Finally, Medicare withheld data when less than 11 patients were treated by one doctor for any given procedure. It's possible women fell more into this low range than men.