Share All sharing options for: Proof that movies really do get better as the year goes along

Congrats: we're almost to May. And in May, movies will stop sucking as much.

We're about a month outside of 2014's "dump months," the film industry term for January, February, March, and occasionally April. Movies released in that stretch are supposedly generally terrible and poor box office performers. They're often genre pictures that were delayed because of Oscar season, or considered insufficiently promising for a summer release. By May, blockbuster season is starting, and the quality and bankability of releases generally improves. That's the kind of thing that sounds like half-baked industry conventional wisdom, but a look at the data suggests it's actually true.

Let's take box office first. The average receipts for a movie receiving a wide release, according to data from Box Office Mojo, start low for films opening in the early months of a year, then grow dramatically for the summer season, dip again in late summer and fall, and then grow again for the holidays: 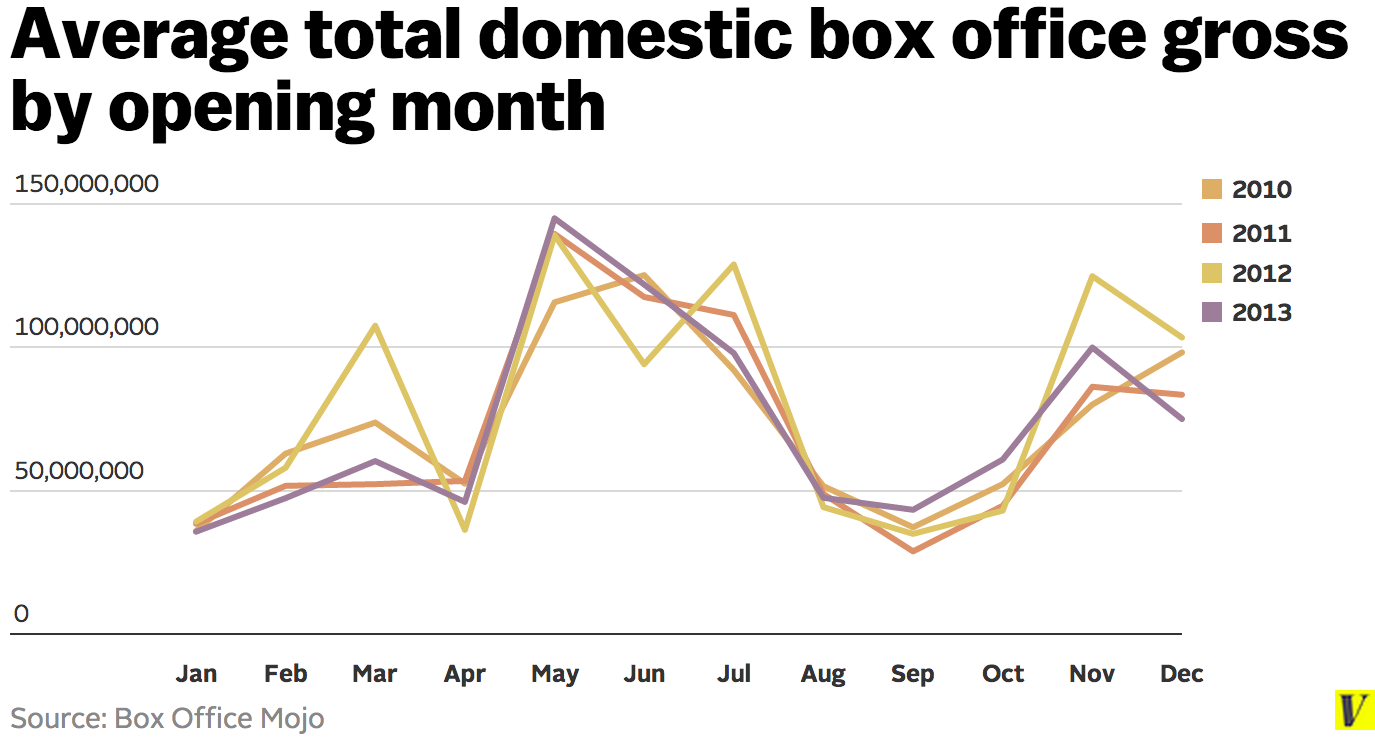 (Because of the difficulty of calculating the actual number of tickets sold, all numbers above are in nominal dollars).

But are the movies being dumped in the first part of the year all terrible? That's a subjective judgment, but the review aggregators at Rotten Tomatoes and Metacritic can provide some help here. Vulture's Adam Raymond and Metacritic's own Jason Dietz have done some good analyses on this topic, but while they mainly looked at data from the dump months themselves, it's also useful to compare averages in dump months to those the rest of the year. If you do that, you see that the general trend throughout the year is up: 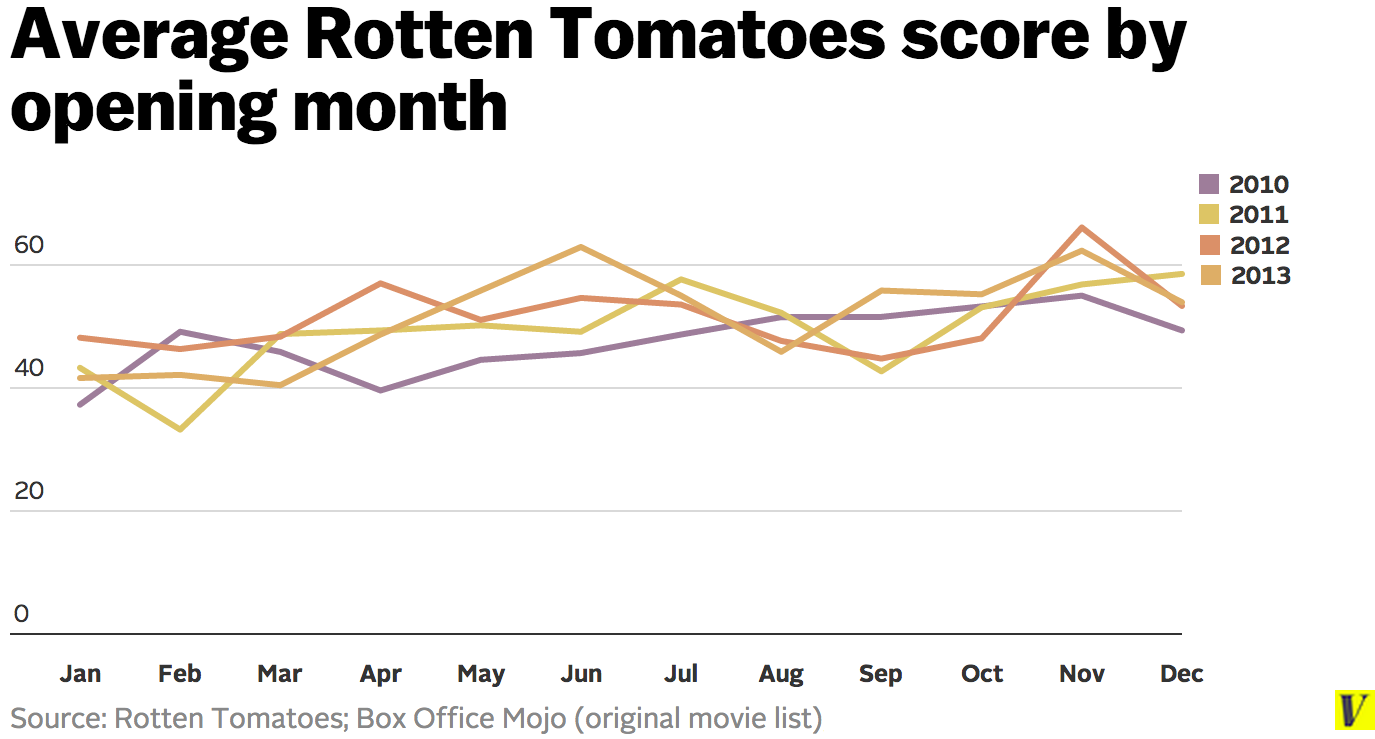 Across all four years sampled, the average score in the best-performing month (November) was about 43 percent higher than the average in the lowest-performing month (February). But the early-fall slump present in box office receipts is there in reviews, too. The average September release gets a 48 — higher than the average February film (42) but below the average July movie (54) and well below the average November movie (60). TV Tropes and Scott Meslow at The Atlantic count August and September among the ranks of "dump months," and this suggests they have solid reason to. The timing makes sense. By August, blockbuster season is winding down, and it stands to reason that studios would use that period to release movies they didn't have enough confidence in to put out in May, June, or July.

Metacritic scores go up over the course of the year, too, but somewhat more mildly, growing 22 percent from nadir to peak when you look at all four years: 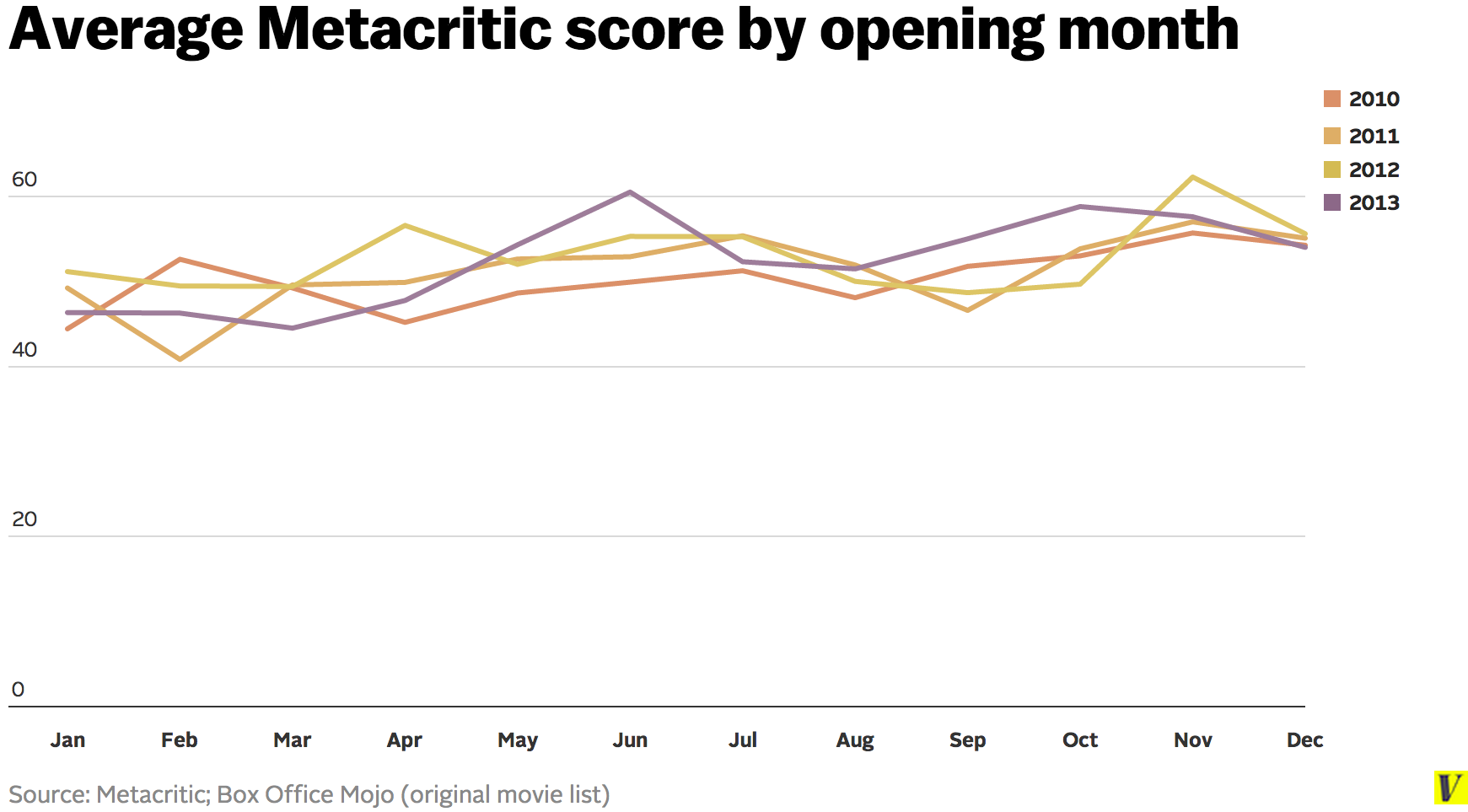 Here are the overall averages for both review aggregators across all four years, a view which makes the autumn dip more noticeable. It also suggests that in lull months, Metacritic is somewhat more forgiving than Rotten Tomatoes. While the two scores track well for most of the year, in January through March, as well as September, Metacritic's averages are higher: 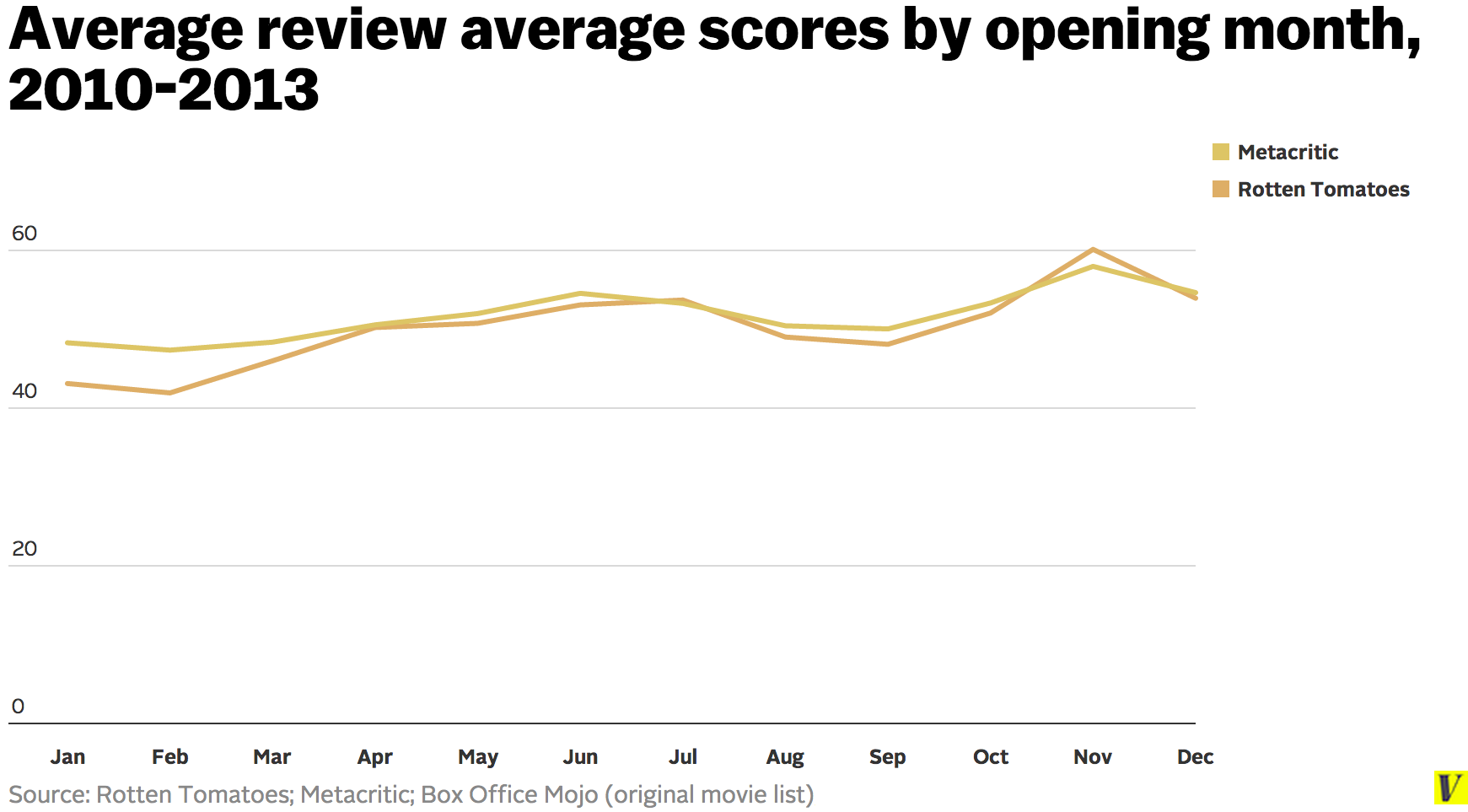 Want to play around with this data? Have at it; you can see it all in this Google Doc. It includes the domestic gross of every movie Box Office Mojo lists as a wide release from 2010 through this year, with Metacritic and Rotten Tomatoes scores added, and re-releases (e.g. Jurassic Park 3D) cut out. See anything that looks off? Drop me a line at dylan@vox.com.