The animated map that explains the world

Share All sharing options for: The animated map that explains the world

One of the important differences between the modern world and most of recorded history can be summed up in one GIF. Ready? Here it is:

That's a map of Polity IV scores, the most commonly accepted measure of democracy among political scientists, changing over time. Countries are ranked on a scale of -10 to 10, with each score broadly representing whether a country has elections, how fair they are, and whether, once in office, leaders can govern like dictators. Anything that scores 6 or higher is a democracy, and shows up in blue on the map.

What this tells us that we're living in a time unlike any in recorded history. 150 years ago, the United States and Belgium were the only democracies in the world. Today, about 60 percent of all countries are democratic.

At the same time democracy spread globally, every objective metric of human welfare jumped up dramatically

Democracy took over the world, really, really quickly — and we're still sorting out what that means. Here's a few interesting things about that the data mapping democracy's rise, ranging from interesting trivia to "fate of the world" level important.

It can be hard to remember how desperate things seemed at the height of World War II. But in 1942, global democracy was right on the precipice. 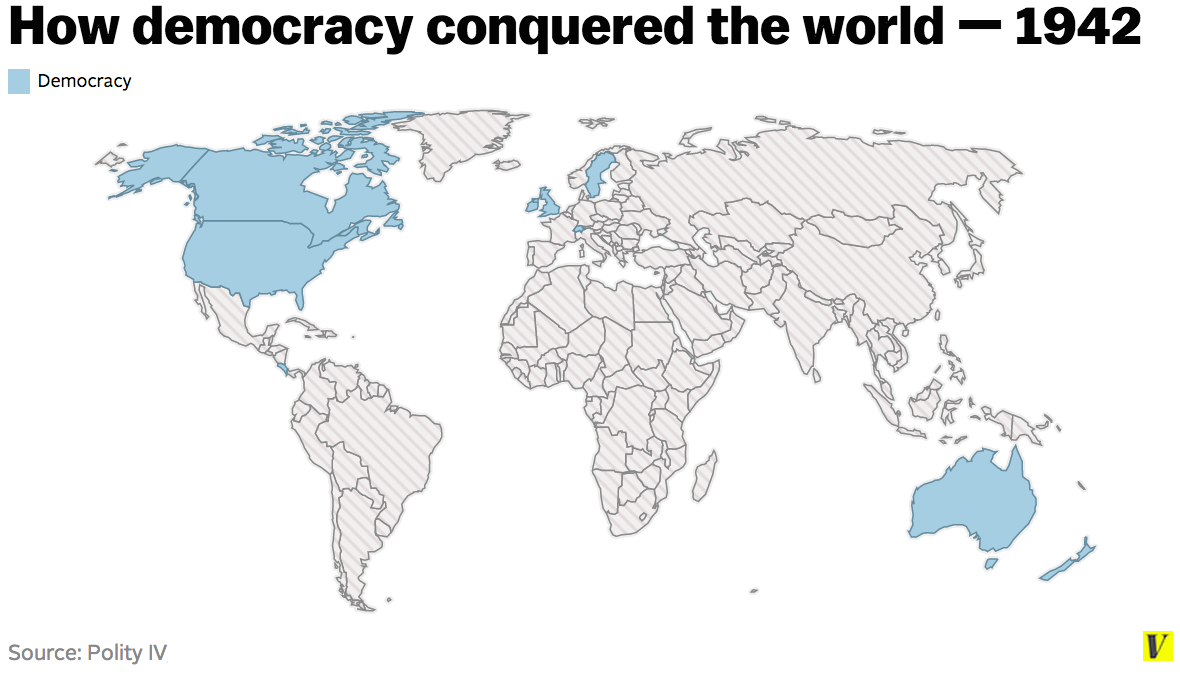 That's just nine democratic countries, and all but Sweden, Switzerland, and Costa Rica were English-speaking. 20 years before then, there were 24 democracies around the world.

World War II came way closer to wiping out democracy than you might think.

After World War II, European democracy was by-and-large pretty safe. But take a close look at the 1962 map. 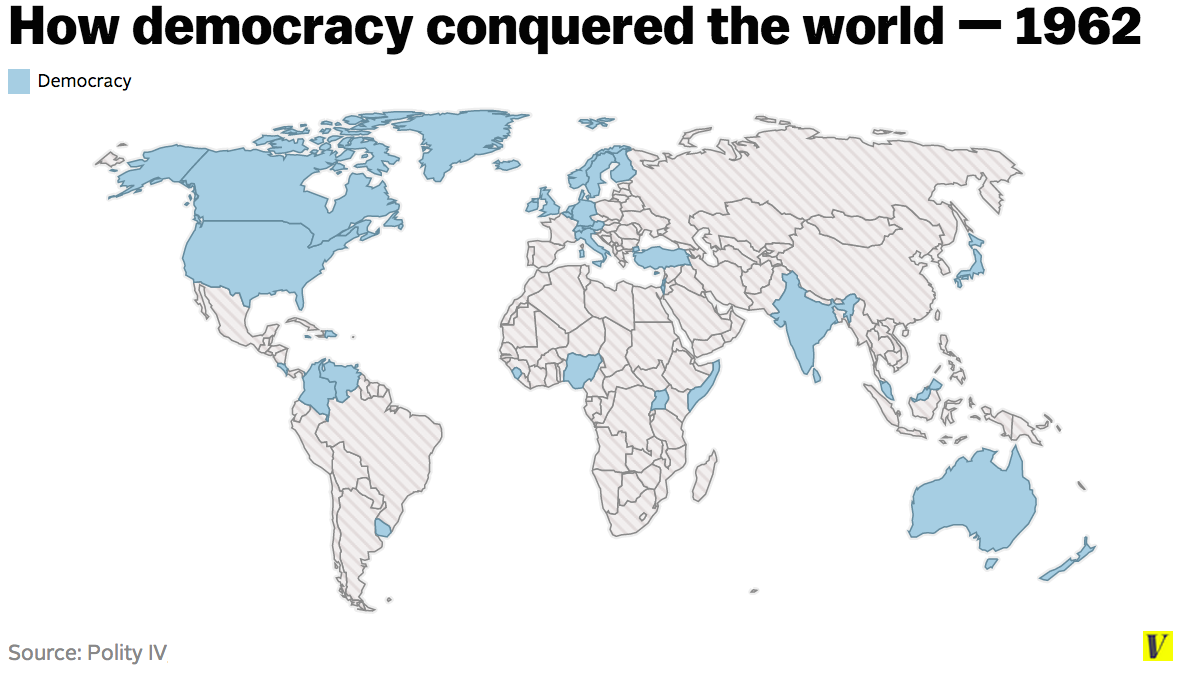 Notice anything interesting? France, that bulwark of the Western world, doesn't count as democratic. It scored a 5, just one point below the Polity IV cutoff for a real democracy.

This was true from 1958-1968. The reason is that, in 1958, the French Assembly empowered World War II hero Charles DeGaulle to take over during the disastrous war to keep its colonial possessions in Algeria. DeGaulle was given emergency powers, including the ability to write laws independent of the Assembly. French democracy ultimately survived DeGaulle, but the line between democracy and something less free is fuzzier than we might ordinarily think.

Post-World War II, democracy spread globally — first slowly but surely, and then all of a sudden around 1990. Just look at the blue line, representing number of democratic countries, shoot up after 1940: 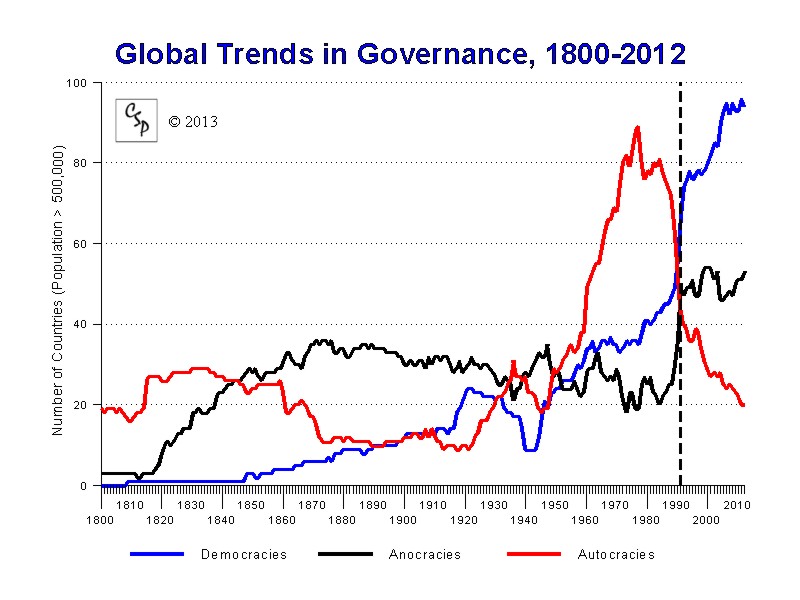 This trend was powered by countries outside of democracy's near exclusive pre-World II bases in Western Europe and the broader Anglosphere. Today, democracy lives everywhere: it dominates Europe east and west, South Asia, and Latin America. It has a real presence in East Asia, and beachheads in Africa and Central Asia. 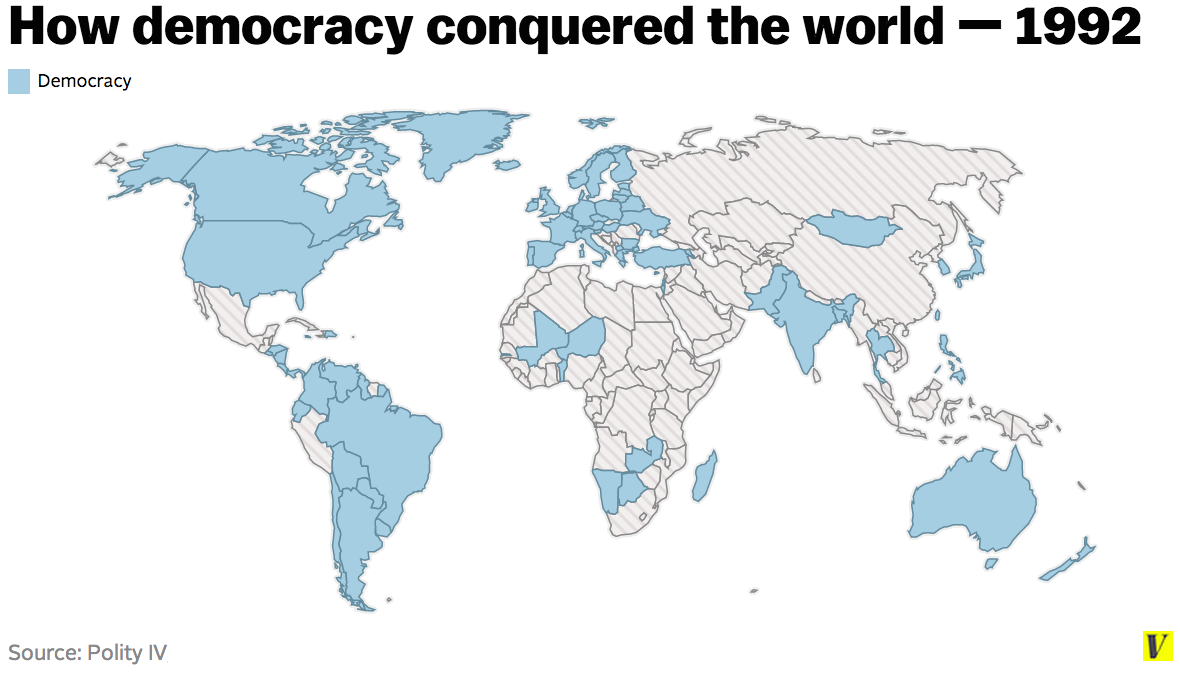 There's two big reasons for that: decolonization and the Soviet Union's collapse. After World War II, America and its European allies made a big deal out of democracy and human rights. The tension between those beliefs and holding colonies were unbearable, and colonized peoples pressed for their rights. Absent the threat of Soviet repression, the former Soviet nations were free to do the same.

So it's really only the last 30 or so years that can fairly be called democracy's heyday. We're living through one of history's greatest natural experiments.

After democracy started advancing globally, the world got way better for everyone

At the same time as democracy spread globally, every objective metric of human welfare jumped up dramatically. Between 1950 and early 2011, global life expectancy jumped from 47 to 70. From 1990 to 2011, the percentage of people who died before turning five fell by about half. The percent of people killed by war is 1/30th of what it was in the late 1940s. 721 million fewer people live in poverty today than in 1981. 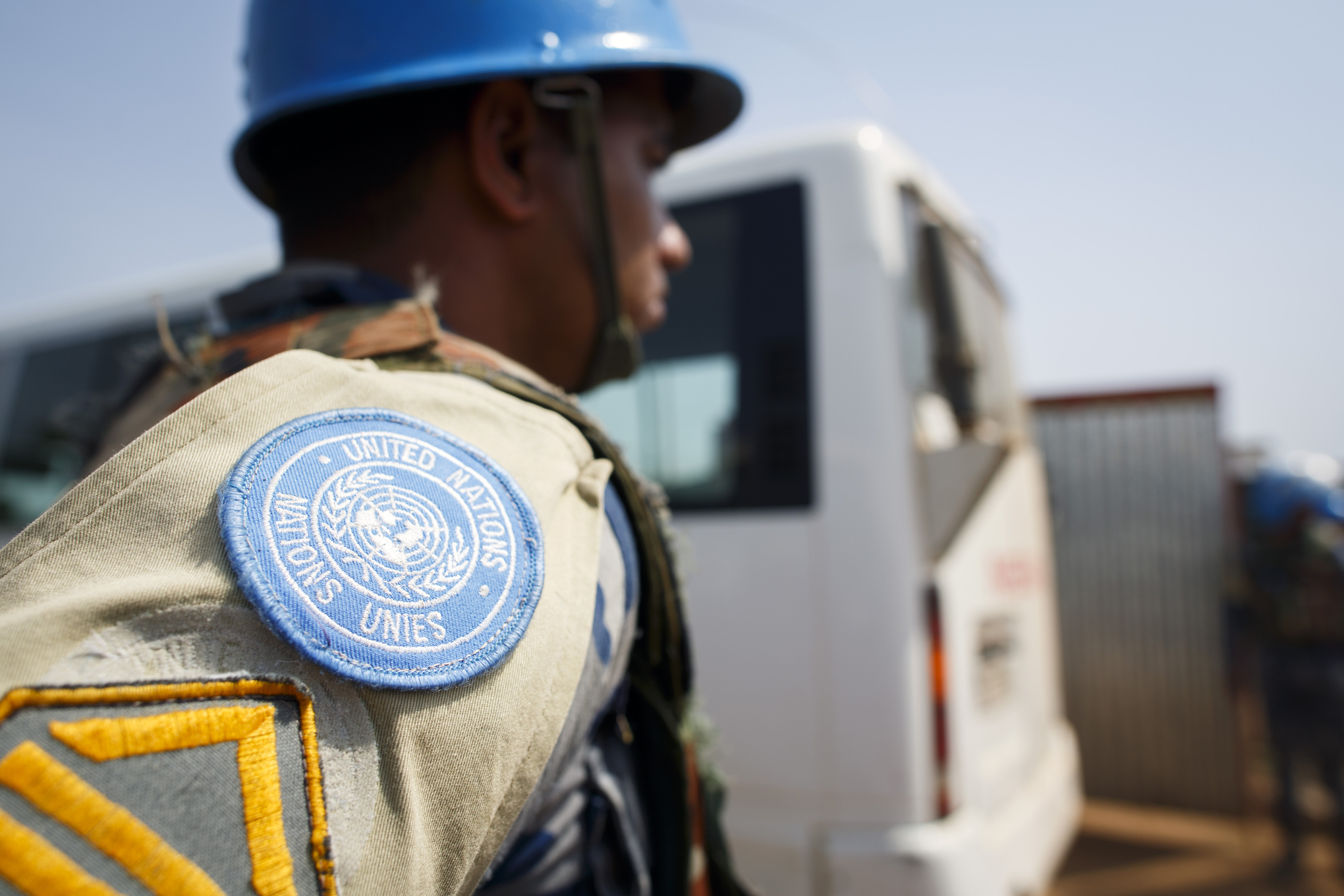 One of the biggest questions facing the world today is how much of that we can fairly attribute to democracy's spread around the world. For instance, the research suggesting that democracies never or almost never go to war with each other is really strong: one scholar of international relations called it "the closest thing we have to an empirical law," like gravity. But there's still huge debate over whether it's something about democracy, like democratic citizens believing it's wrong to attack other elected governments, or an unrelated factor, possibly something as simple as dumb geographic luck.

The implications of this debate are huge. If democracy's spread is one of the key causes of the world's improvement, then we might be in a happy cycle: democracy makes the world richer, healthier, and less violent — thus making it more likely that democracy could survive and spread further.

But if democracy is merely a byproduct of other good thing, or even irrelevant to the recent improvement in human welfare, then our happiness might be more fleeting. Indeed, some scholars think democracy may already be in retreat today, though the best evidence suggests otherwise. 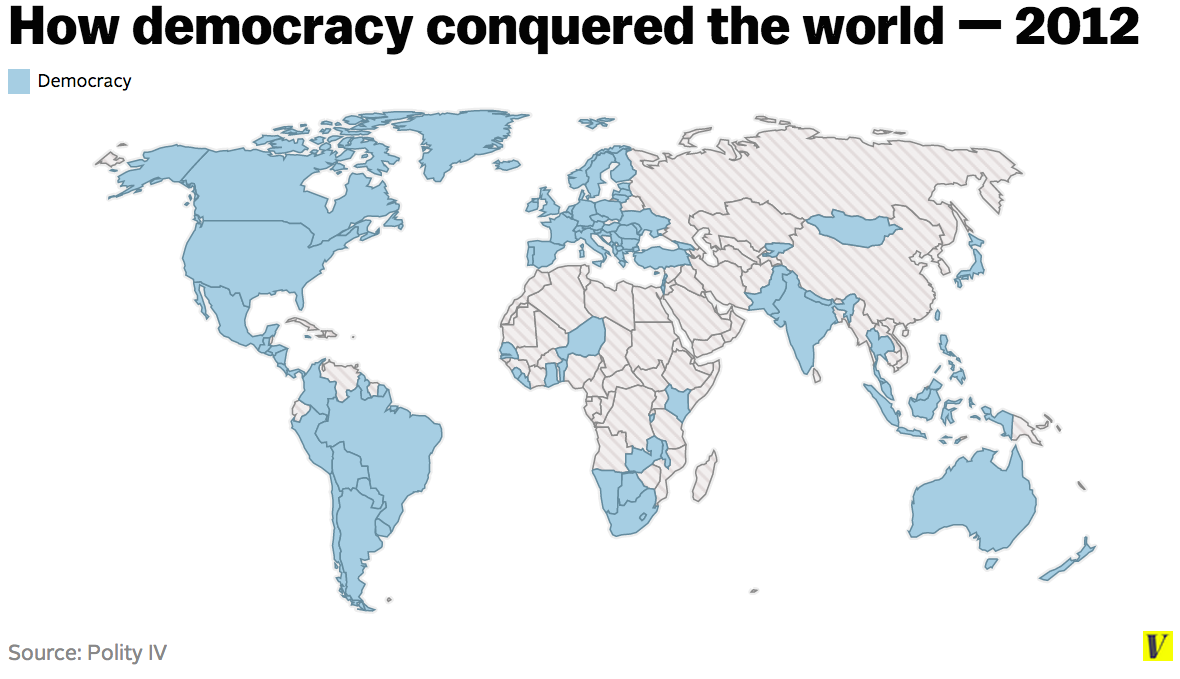 So that little GIF? It's kind of a big deal.