Over the past month, people across this great nation found themselves looking in the mirror and asking themselves one thing: am I basic?

"Basic" and its more aggressive counterpart, "basic bitch," have been in usage for years now, but there's been a spike in popularity of the slang term recently. Rihanna declared open season on basics, saying that the set of her video "Pour it Up" was a "no basic zone;" men's websites have been instructed not to date a basic; and recently, VICE shamed Coachella's music lineup by hinting that the music festival might be a playground for the basic.

You might have questions. In particular, you might be wondering what in the world the insult even means. So here's a short guide that will hopefully calm your fears and, at the same time, help you understand the current pop culture fascination with the term.

Step away from the ledge. Being basic isn't that serious, nor should it paralyze, incapacitate or cripple your life.

But am I basic?

Well, it depends on who you ask. If someone doesn't like you, they've probably already commented and laughed about your basic-ness. But the joke may be on them. They might not even be using it correctly.

Okay, so what is the correct usage?

There's a video from College Humor that distills the current meaning of "basic":

It references a lot of things like having a penchant for Friends, sentimental picture frames, "sexy" sweat pants, Ugg boots, and the —

That video, thanks to the power of sharing (it has over 2.8 million views on YouTube), has sort of crystallized the term "basic" and a "basic bitch" into these possessions and cultural touchstones.

And the video also represents the peak in popular knowledge of a slang term which has grown dramatically in usage in the past year. Here are the Google analytics of "basic bitch", and notice how it's dramatically spiked since 2013: 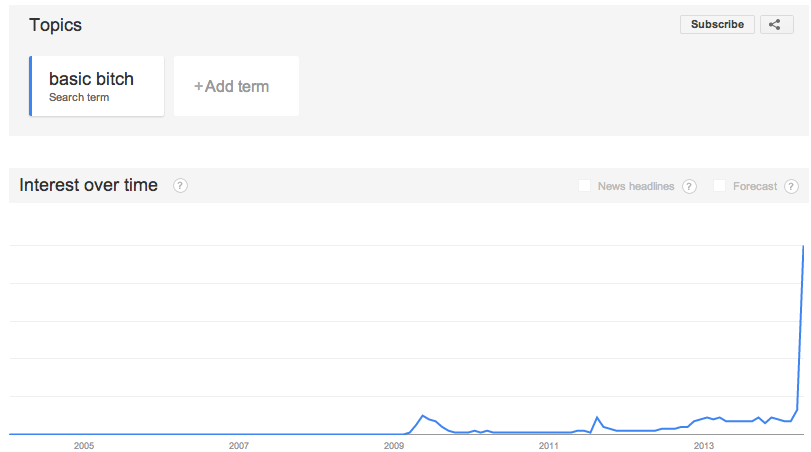 So there's a lot of interest right now, and that's part of the reason College Humor and a few think pieces capitalized on that and this image of being basic. But what you'll notice is that "basic bitch" actually had a small peak in 2009 and another in 2011. Basic Bitch Today, a tumblr dispensing some crucial basic information, began in 2011.

Right. That was around the time Krea ... Kreaz ... that young woman came out with that one song.

Kreayshawn. And you're right, her song "Gucci Gucci" came out in 2011 which probably accounts for that blip on the Google trend radar. That song used the lyrics: "Gucci Gucci, Louis Louis, Fendi, Fendi Prada ... basic bitches wear that shit so I don't even bother":

Kreayshawn defined basic as being unoriginal. The brands she mentioned are very popular designers, but also are known for their trademarked logos. This was also an implicit dig on people with money. In a sense, Kreayshawn was saying that you could have all the money in the world and still be kind of terrible and not that cool— or not as cool as Kreayshawn.

And the current permutation of "basic" seems like an extension of that. But instead of punching up, it's more punching down on people (but women in particular) who like certain brands or enjoy a certain kind of lifestyle.

Am I being sexist if I am calling someone a "basic bitch?"

Let's be clear: you're not calling someone a "basic bitch" because you're paying them a compliment. You are insulting someone, and on top of that, adding gender to that insult.

"Bitch", has had a long and twisty history of being a putdown to women. Recently, there's been more of an acceptance of the term and reclaiming of the word (thanks to influences like Bitch magazine, Tina Fey and Amy Poehler) to mean a cool, powerful woman who gets stuff done.

But calling someone a "basic bitch", whether it's your intention or not and whether you believe the word "bitch" to be a putdown or not, relies on the idea that there are certain "bitches" who are inferior to other non-basic "bitches."

You keep saying things like, "current" or "right now"— what gives?

Think about street-slang and slang for a second. While the web has been responsible for creating different dialects and languages, and as much as we like to say the Internet is our virtual hang out, it's still not the same thing as talking to someone face to face.

And by the time someone's Googling a term, that term has usually hit some kind of mainstream saturation point far from where it started. And people using "basic" in real life are already evolving the term beyond the College Humor video's definition.

"Basic" and "basic bitch" existed long before Kreayshawn made the terms popular in 2011, and even before people started Googling it in 2009. Back then, and even before then, it existed in black and hip-hop culture.

So is there a feeling that white people have changed the meaning?

Yup. "White people: Where did this sudden obsession with being "basic" come from? Who hurt you (this time)?" Buzzfeed's Saeed Jones wrote on Twitter, observing the rise of "basic-ness" and its newfound mainstream and popularity among white people.

Jones points out that the word has become more or less a cousin of "first world problems" or "white girl problems"— popular memes and internet terms for minor frustrations that draw the ire and complaints from affluent and, yes, white people. And Jones's dismay at what "basic" has turned into raises the question of what its original meaning is or was.

Jones and others point out that "basic" had already lived a full life in hip-hop slang long before this current wave of people using it.

So what did "basic" mean before?

It's not entirely clear because language and words aren't simple (it's the reason that if you ever use a thesaurus, you will hate 82 percent of the suggestions it gives you).  Basic, in its early days, was more or less a way to say that someone was unsophisticated. And when it's passed to us by way of Kreayshawn, College Humor, and whatnot, that meaning somehow turns into "wearing a lot of North Face."

It might be helpful to think of slang (in this case black or hip-hop) going mainstream (or white) in the same fashion as any language you run through a translator — you lose a little bit of nuance no matter how good your translation might be. That's a big reason Google translate can be a laughable experience, and big reason why no one has perfected (but many have tried) a translation app yet.

So let me get this straight: We're using an outdated insult that barely means what it was supposed to mean to put down people and think we're being kind of cool?

But, you should live your life. Just be you. But also keep in mind that it isn't the first time slang (from hip-hop, black/white/Asian/Latino/LGBT/etc. culture) has gone mainstream and underwent a change

"Throwing shade." The term was used in the South and in (drag) ball culture an—

That means a nasty look— like when Michelle Obama "threw shade" at John Boehner?

No. But that's the point. "Throwing shade" was originally meant to be a clever, subtle and thoughtful putdown. But that eventually evolved into what you might otherwise call a "side eye", and eye-roll or a dirty look. And while it maintains some tenets of what its original meaning was (a way to show your displeasure with someone), it can convey something different.

Yup. Basically. They might be as unoriginal as the kind of "basic" Kreayshawn rapped about, as mainstream as College Humor, and as unsophisticated as basic's observers first noted.

That makes me feel better. One last question.