If you're sad, don't force yourself to smile; it may make things worse

Share All sharing options for: If you're sad, don't force yourself to smile; it may make things worse

Quick question — why do people smile? Is it because they're happy? Or is it because they want to be happy? Be careful which answer you choose — according to a new study in the Journal of Experimental Social Psychology, people who believe the latter, perversely, become less happy when they smile.

The second explanation may seem cynical, like people are pantomiming happiness rather than acting doing stuff that makes them happy. But there's actually a fairly well-supported theory in psychology, called the facial feedback hypothesis, which states that smiling and other facial expressions can actively cause the emotions they're perceived as expressing. It's a difficult theory to prove, given that if you measure people's emotions (either through a survey or through brain imaging) before and after they smile, it's hard to say whether their emotions are changing because of the smile itself or because of the thing that made them smile in the first place.

But clever researchers have found ways around that problem. In 1988, Fritz Strack, Leonard Martin, and Sabine Stepper published a study where they had subjects put pens in their mouths and hold them either using only their teeth (which contracts the same muscles as a smile) or only their lips (which makes it impossible to smile), and look at cartoons. They found that, "subjects who held the pen in their teeth at the time the cartoons were presented reported feeling more amused than those who held it in their lips." Subsequent research done by having people pronounce certain vowels which can force smiles and other expressions confirmed the finding, and raised the possibility that the effect could have a physiological component: smiling cools the air entering the nasal cavity, which can improve one's mood.

There's also a psychological component, of course; furrowing the brow, which doesn't do anything to the air going to your nose, makes people report greater levels of sadness. And the latest study, from Northwestern's Aparna Labroo, Hong Kong University of Science of Technology's Anirban Mukhopadhyay, and Toronto's Ping Dong, confirms another psychological factor at play. In one of the studies they ran, 85 undergraduates performed the pen-in-mouth exercises as in the Strack/Martin/Stepper study. Half were informed, before placing the pens in their mouths, that smiles are responses to happiness (what the researchers call the "reactive smile-theory") and half were informed that smiles are attempts to become happy (the "proactive smile-theory"). After performing the exercises, they were quizzed on their happiness level. 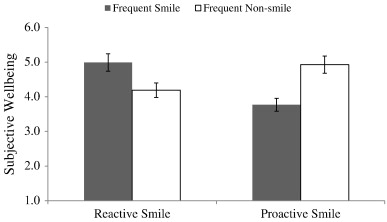 The researchers also had 63 students — half informed of the "reactive" theory, the other half the "proactive" theory — look at photos and smile if they found them funny. In one set of cases, 10 funny photos were shown, and in the other only 1; each case also had photos the experimenters did not label as funny. Unsurprisingly, people smiled more frequently when presented with more funny photos, but smiling a lot just made people informed of the "proactive" theory sadder: 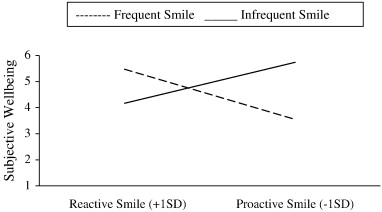 The takeaway here is that forcing smiling among people who are feeling down could be counterproductive. "From a practical standpoint, our data imply that making people who are feeling bad smile could backfire and make them feel (or at least think they feel) worse because they may interpret smiling as trying to become happy," Labroo, Mukhopadhyay, and Dong conclude. "Smiling frequently would remind them of being not happy." In other words, The Killers were right all along: