Americans have no idea where their oil comes from, in one chart

Share All sharing options for: Americans have no idea where their oil comes from, in one chart

You can hardly blame Americans for believing that the vast majority of our oil imports come from the Middle East. Ever since the 1973 oil crisis, when Middle Eastern countries refused to sell oil to the United States as punishment for backing Israel in that year's Arab-Israeli war, the American political conversation has dominated by calls for "weening ourselves off of MidEast oil." What most Americans don't know is that we've mostly succeeded.

The University of Texas, as part of its annual energy poll, asked Americans where they think US oil comes from. A staggering 58 percent of Americans think that our top source of foreign oil is Saudi Arabia and another 15 percent say it's Iraq — nearly three quarters of Americans. Meanwhile, only a tiny share — 15 percent of Americans — think we get most of our oil imports from Canada or Mexico. But the truth is almost the exact opposite: we get far more oil from our North American neighbors than we do from the Middle East: 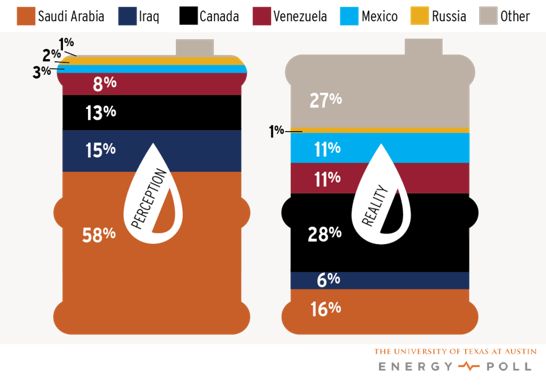 This matters. If the vast majority of Americans think we're so much more reliant on Middle Eastern oil than we actually are, they're going to push for policies they may not want if they knew the truth. America's foreign policy and energy policy are already problematic enough without being distorted by the vast public misperceptions. As the energy poll's director wrote when the results first came out in October, "Our attitudes eventually shape future policy decisions and define global energy priorities."