Share All sharing options for: These countries have a tenth of the world's people — and almost half its homicides

Think of it as a new kind of global inequality. The United Nations warns there's a widening gap between countries with extremely high homicide rates and countries with low ones.

All in all, the most homicidal countries account for a tenth of the world's population (11 percent) but nearly half — 46 percent — of its homicides: 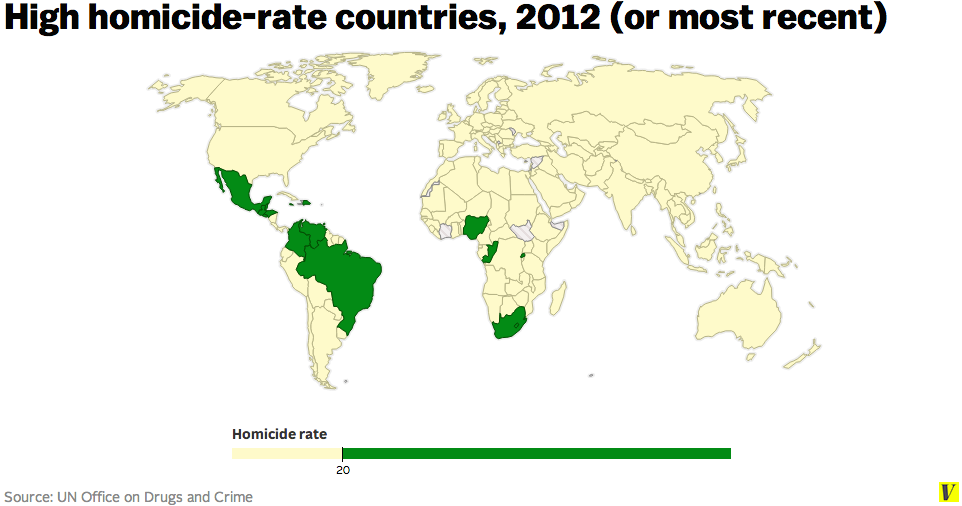 Some of the heavy hitters are in Southern Africa. South Africa, in particular, has 31 homicides per 100,000 people — and that's after its homicide rate has been dropping for the last twenty years, as the country recovers from apartheid and its aftermath. (In 1995, the first year after apartheid, the homicide rate was 65 per 100,000.) But most of the worst countries for homicide are concentrated in Central America and northern South America: in fact, more people are murdered in the Americas than in all of Asia. Many of these countries, led by Honduras —whose world-leading 90.4 homicide rate is nearly twice as high as second-place Venezuela's — have seen violence spike since 2007 as drug trafficking and gang violence have erupted.

there are more homicides in the americas than in all of asia. the reason? drug trafficking

Some of these countries are in better shape than others, and the same tactics that may curb violence in one country might have no effect in another. Gangs in both El Salvador and Honduras have recently signed truces, for example, but El Salvador's homicide rate declined steeply after the truce, while Honduras' didn't decline at all.

The good news is that the rest of the world is increasingly peaceful: countries with low homicide rates house 42 percent of the world's population, and only 8 percent of its homicides. But the UN data shows that a global trend toward peace doesn't mean it's getting more peaceful everywhere. For the moment, at least — and given how long it took South Africa to get its homicide rate under control, it looks like it'll be longer than a moment — high- and low-homicide countries will continue to be a world apart.

Here's the full list of the 25 countries and territories with homicide rates of 20 or higher per 100,000 people: 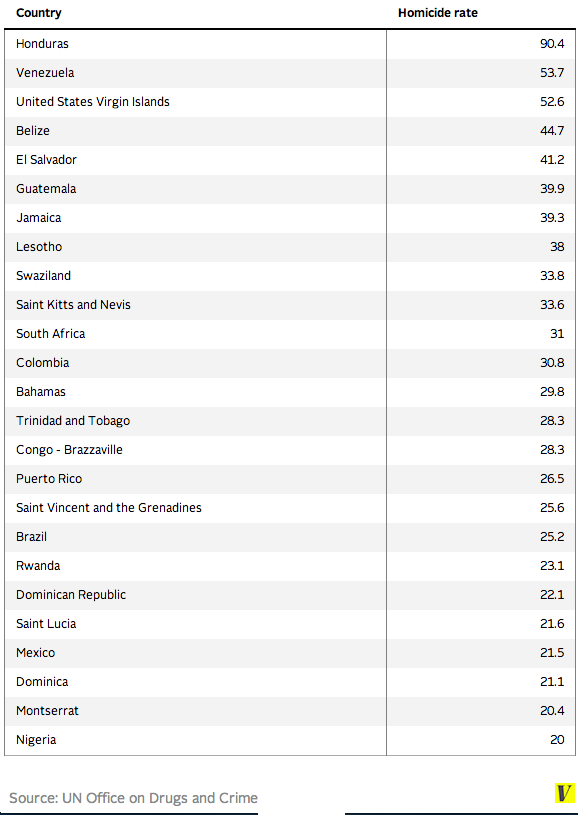