Watch out — monkeys can now do math

Share All sharing options for: Watch out — monkeys can now do math

A new study published April 21 in the Proceedings of the National Academy of Sciences suggests that monkeys can add. That's right: your oh-so-special human skills might not be as special as you thought.

But how do we actually know this? After all, it's not like monkeys can simply raise their hands and tell the class. So here's a rundown of how researchers taught the rhesus macaques to add — and how they know it's not just a fluke.

First, the monkeys are taught their numbers

The monkeys learned numbers to get a reward

The monkeys in this study had already learned a set of symbols representing the numbers 0 to 25. And they knew the symbols really well — with about 70 to 90 percent accuracy, depending how long they had been training.

How could researchers tell? They presented the monkeys a choice on a touchscreen between two symbols. Whichever one the monkey touched, he would get a delicious reward of exactly that amount. Over time, the monkeys learned to pick the higher value when presented with two numbers.

Then the monkeys learned to add 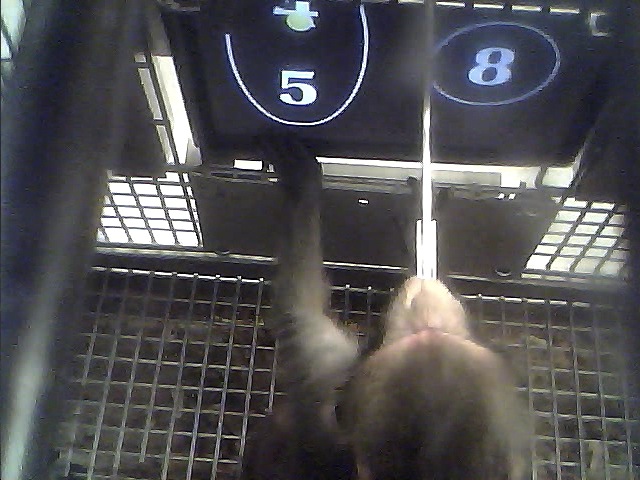 This monkey knows that 4 + 5 is more than 8. (Wondering what the thing in his mouth is? It's a tube providing rewards, most likely water or orange soda.) Courtesy Margaret S. Livingstone

The monkey above is about to choose 4 + 5 on the touchscreen with its paw instead of 8. That's because it knows that the sum of 4 + 5 is higher than 8.

The monkeys chose the correct, larger sum with the larger reward

This is how researchers tested the monkeys' ability to add. After all, if the monkey above was just picking the highest number he saw, he would have picked 8. So if the monkeys didn't know how to add, they would only get the right answer about 10 to 30 percent of the time.

But that's not what happened. The monkeys actually chose the correct, larger sum with the larger reward about 50 percent of the time. That's far from being perfect at addition, but they were definitely doing some math.

One possible objection here is that the monkeys just got trained to pick the right answers over time and weren't doing any math at all.

The monkeys could do math with different symbols, as well

In order to show that this wasn't the case, the researchers then taught the monkeys an entirely new set of symbols representing 0 through 25. The monkeys were able to do math with the new symbols immediately. This shows that they actually were doing math because they could do it before there was any time to memorize the new answers.

That's an important discovery. A previous study had shown that monkeys can add values (tested as clusters of dots), but this is the first one to fully rule out memorization.

Humans and monkeys aren't the only animals that can count

In fact, there's a whole body of research exploring mathematical abilities in animals.

Fish can count up to four

Fish, for example, can count up to four. Or at least one species could in a 2008 study. The researchers showed that a fish greatly preferred to join up with a group of four fish significantly more than three, which was significantly more than two. This means that the fish had the capability to perceive the difference between two and three and four. For even higher numbers, the subject showed a preference if the ratio between the two groups of fish was at least two to one.

This kind of phenomenon happens in people, too. It's more difficult to perceive the differences between higher numbers than lower numbers. And, the phenomenon happens across other senses, too, including hearing. The greater the magnitude, the lower the accuracy. It's called the Weber–Fechner law, and it has puzzled psychologists for over a hundred years. "Ever since then people have been trying to explain it," the lead researcher of the monkey paper, Margaret Livingstone, told me. "People in psychology argue about this incessantly."

You can test it yourself below. Do each question in approximately two seconds.

The second question is more difficult, even though the answer for both is 2. But why? 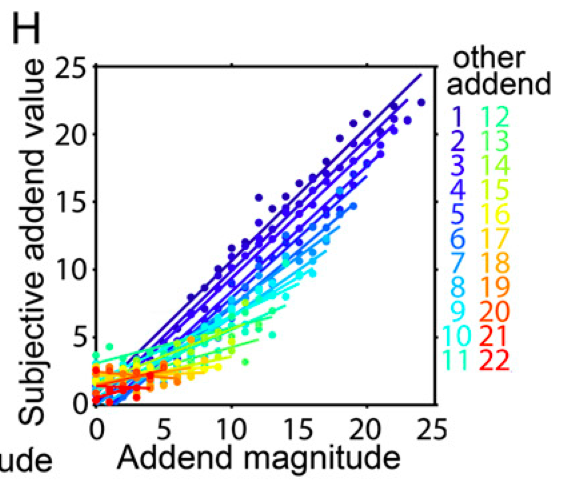 This is the coolest figure in this paper. From Livingstone et al.

What the monkeys in this study showed was something altogether different. They consistently undervalued small numbers. That's what the chart above shows. For example, they were far more likely to forget to add in the number 1 if it was being added to 12 than if it was being added to 6. (The x-axis is the number that was supposed to be added in, and the y-axis is what the monkey actually added in.) This means that they seemed to be perceiving numbers in a relative manner, rather than on an absolute scale. In other words: no ruler.

We would likely expect human number sense to work in the same way.

PS: I'm calling the monkeys "he" for a reason

It's because they were all males. Why? It's easier to buy a male monkey because the females are usually kept for breeding.