Why do some politicians cross party lines more? They're nicer

Share All sharing options for: Why do some politicians cross party lines more? They're nicer

Why do particular politicians work hard to cross party lines? A new study by three political scientists suggests that they simply have different personalities — that they're more agreeable. Adam Ramey, Jonathan Klingler, and Gary Hollibaugh Jr. use computer modeling techniques to estimate what personalities politicians have. And they find that personality differences can account for some interesting discrepancies in legislative behavior.

The idea: See if the measured personalities of individual legislators can predict behavior

The most common way to measure personality is to rate people on five major factors — the Big Five. The authors write that these factors, "over the past half-century, have consistently explained nearly all of the variance in personality differences in repeated studies, the results of which have been quite robust across multiple cultures, contexts, measures, and samples."
These Big Five traits, sometimes referred to by the acronym "OCEAN", are:
More conscientious legislators did in fact miss fewer votes, and more agreeable legislators do co-sponsor more bills with members of the opposing party
It's most common to measure someone's Big Five personality score with a test (here's an online version you can take). But since members of Congress are unlikely to fill out such surveys, Ramey and his co-authors have to use a different measurement method. In recent experiments, computer models have predicted a subject's personality score based on the words they use — certain words seem to be used more by extroverted people, or more by agreeable people, and so on. So this study applies that computer analysis to all the speeches current legislators gave on the House and Senate floors between 1996 and 2012, and uses that word usage data to rate each politician on personality.
Then, the authors suggest a behavior that a politician scoring highly on each one of the Big Five traits would be likely to demonstrate — for example, they think more agreeable legislators would be more likely to co-sponsor bills with more members of the opposite party, and that less conscientious legislators will be more likely to miss votes. 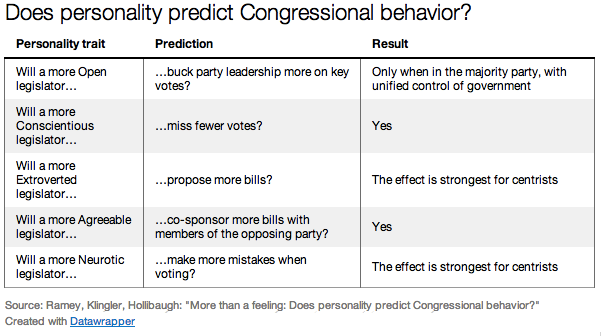 For two traits, the authors found particularly strong results — more conscientious legislators did in fact miss fewer votes, and more agreeable legislators do co-sponsor more bills with members of the opposing party.
A politician could also use speeches to project a false image of his personality
Then, two other traits seemed to be important mainly for politicians in particularly competitive districts, or with moderate ideologies. More extroverted centrists proposed more bills, and more neurotic centrists made more mistakes in voting.
The final trait, openness — which the authors interpret as an openness to risk-taking — seemed to predict defiance of the party leadership only in very particular circumstances. When in the majority and with unified control of government, legislators with more open personalities were more willing to go against the leadership of their party.

Limitations of the study

Relying on Congressional speeches might not produce accurate personality estimates —
few members of Congress write their own speeches, after all. And a politician could use speeches to project a false image of his personality — pretending to be warm and understanding in public, while being cruel and ruthless in private. But Ramey and his co-authors found significant results despite these data limitations.
It's also noteworthy that two of the traits could mainly predict the behavior of centrist members of Congress. While it's certainly important to understand those swing legislators, this further drives home just how important ideological polarization is to understanding today's Congress.