Obama is giving up on Ukraine, but just getting started with Russia

Share All sharing options for: Obama is giving up on Ukraine, but just getting started with Russia

It's no secret that Vladimir Putin is winning in Ukraine. He's annexed Crimea, fomenting disorder in eastern Ukraine that could lead to war and possibly another Russian invasion, and shrugged off the US and Europe's targeted sanctions meant to punish him. Meanwhile, there's not much that the US can do to stop him without Europe's help, and European countries just don't seem ready to step up.

President Obama, fed up with Putin, has rightly recognized that it's time for the United States to adopt a radically different strategy for dealing with Russia, in Ukraine and around the world. That strategy, articulated on Sunday by New York Times reporter Peter Baker and his sources, is what we might call "new containment": isolate Russia and actively curb its global influence, as we did with the far more powerful Soviet Union.

That's a tougher Russia strategy than any since the fall of the Soviet Union in 1991, meant to challenge a more aggressive and uncooperative Russia. (When I asked former US Ambassador to Russia Michael McFaul on Twitter if he thought the Times story accurately described Obama's new strategy, he said it did.) But this strategy has a major downside, one that will infuriate Russia hawks and concern some allies: it effectively acknowledges countries already within the Russian sphere of influence as Moscow's to do with as it wishes.

The tradeoff of new containment is significant: cede the former Soviet sphere to Russian influence and meddling, but cut Putin off everywhere else. The upside is that Russia does not get to be a global power and does not get to meddle in the Middle East, in East Asia, or elsewhere as it once did. The downside is that Moscow is allowed greater freedom to do as it wishes in the former Soviet republics of Eastern Europe and Central Asia.

If you are, say, the president of Georgia or a Ukrainian citizen or the rightly terrified prime minister of Moldova, this tradeoff can and should worry you: you are a little bit more on your own, and at the Kremlin's mercy, than you were a year ago. But if you are, for example, the defense minister of Poland or an anti-government rebel in Syria, then this is good news: you are now more likely to receive American support for things that may have otherwise been held back as too offensive to Moscow, such as missile defense batteries in Central Europe.

The Times reports that Obama "will not extend the punitive measures to whole sectors of the Russian economy, as some administration officials prefer, absent a dramatic escalation." In other words, Russia will continue to get away with its forcible annexation of Crimea and its ongoing efforts to destabilize eastern Ukraine. It's not clear what would constitute a "dramatic escalation," but if Putin can already get away with invading and annexing part of a foreign country, then he's got pretty close to free reign within the sphere of former Soviet republics. Much as the original Cold War strategy of containment entailed allowing Soviet tanks to stream into Budapest in 1956, new containment means accepting the Russian occupation of Crimea and perhaps other neighboring territories today.

And that's the major downside of this strategy: it effectively tells former Soviet republics such as Ukraine that they're not quite full members of the international community, and don't quite fully receive the guarantee of sovereignty that is supposed to be the right of all states. That's pretty significant. To give you a sense of the former Soviet sphere, here's a 1994 map of the former Soviet republics, along with the concentration of ethnic Russians, whose presence Moscow is using to justify its actions in Ukraine, as it may do elsewhere: 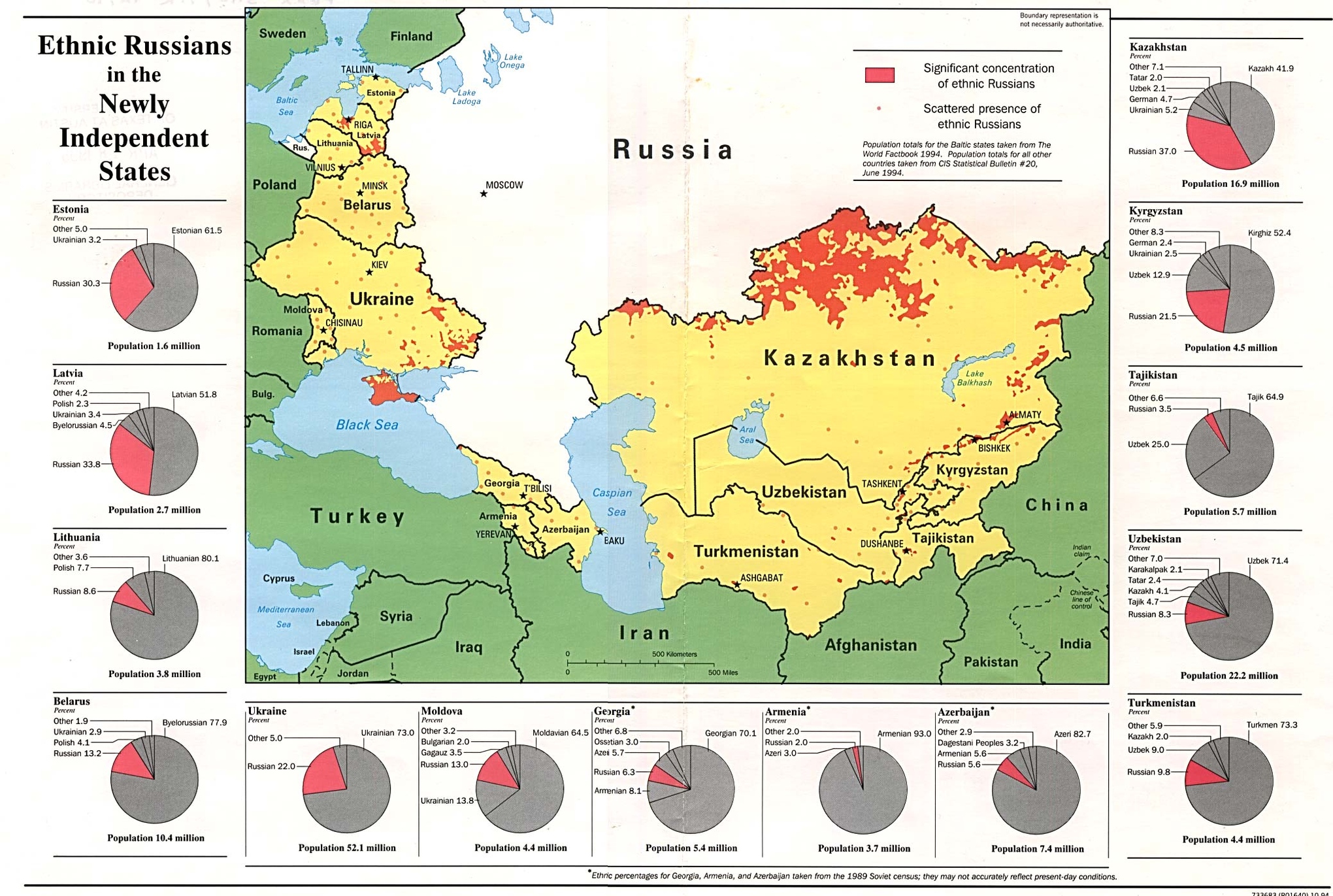 Moldova and Kazakhstan are two places that seem especially likely to follow the Ukrainian example, in which the US and Europe are unprepared to go to much length to stop Russian meddling up to the point of war. Kazakhstan has a large ethnic Russian minority, as does Moldova, and both are politically dependent on Moscow. This does leave some grey areas. The Baltic countries (Estona, Latvia, and Lithuania) are former Soviet republics, and Lativa has a large ethnic Russian populations. But they're also now a part of NATO, the Western mutual defense treaty originally conceived to counter the Soviet Union. That uncertainty is itself dangerous: if neither side is sure where Obama's red line is, Moscow is more likely to test it.

Still, though the cost of this strategy could be very high, don't discount it as weak. In some ways, it's actually quite tough on Moscow: Obama is telling Putin that Moscow's influence will be challenged as an unwelcome force beyond the edges of the former Soviet sphere. This is a direct attack on Putin's ambitions to remake Russia as a global power, as the Soviet Union was, with allies and proxies and influence on every continent. Putin was probably not going to get there anyway – his county and its economy are just not what they were. But now Obama is suggesting that, rather than helping Russia to become a constructive and respected global force, as he did in his first time, he's going to treat global Russian influence as something to be cut back rather than nurtured.

Obama was wrong, as has become abundantly obvious, when he called Russia a "weak country." Weak countries don't get away with invading and annexing foreign territory. But that statement is starting to make a little more sense with this apparent new strategy: he's thinking less in terms of challenging Putin's aggression in Ukraine and more about curbing Putin's larger ambitions of global power. This was captured symbolically in late March, when Russia was kicked out of the G8 (the Group of Eight, now Seven, is the annual gathering of the world's leading industrialized countries). Russia's status as a peer of the world's top powers had been revoked.

Yesterday was a holiday, so it may help to think about this as a little bit like when a family member graduates to the grown-up's table. Russia got invited to the international grown-up's table sometime around 1998, when it became the eighth member of the G7. Now, Putin is being sent back to the kid's table, maybe for good. He can and will wreak havoc there. But, separated out from the adults, he can only do so much.