Share All sharing options for: No, inequality doesn't help the economy grow

Over the weekend, Ezra Klein posted Nobel Prize winning economist Thomas Sargent's sub-300 word summary of what you need to know about economics and included the point that "there are tradeoffs between equality and efficiency." This is true but, I think, also false. And in many ways it's become one of the big myths of our time. There really are tradeoffs between equality and efficiency. But there is no sound basis for believing in a tradeoff between an equitable distribution of income and the creation of a society that is efficient in generating the material basis of prosperity.

If anything it is the opposite. The present highly inegalitarian distribution of economic resources is highly inefficient and makes it inordinately difficult to solve serious problems.

The grain of truth

Like all powerful myths, the myth of the equality-efficiency tradeoff has a powerful grain of truth to it.

Consider the case of Apple's annual World Wide Developers Conference. Because Apple is a much more important company in 2014 than it was in 2004, demand for WWDC tickets has skyrocketed over the past decade. But since the point of WWDC is to provide human-scale interaction with Apple engineering personnel, the conference can't simply scale up to meet demand. One possible approach to this scarcity would be for Apple to jack up the price to some enormous level, at which point supply and demand would be in equilibrium. Apple has instead chosen to cap prices at $1,599 and allocate tickets by lottery.

That is a clear case of Apple trying to abide by an equality norm — everyone has a fair and equal chance to go — at the expense of an efficiency norm. WWDC is a business conference for people working in a highly paid field where the most successful companies are worth billions of dollars. By issuing tickets by lottery, Apple inefficiently guarantees that some individuals who place enormous value on WWDC-attendance will be unable to attend, while creating a situation in which some of the individual who do attend place only a modest value on it.

Allocating the tickets via a market-type mechanism would be much more efficient. And it would become much much much much much more efficient if Apple committed to capping its own revenue at $1,599 per ticket and donating any excess revenue to some worthy charitable cause. You could combine efficient allocation of tickets with massive fundraising for the homeless population in the Bay Area or life-changing infusions of money to desperately poor people in rural Kenya.

WWDC-like tradeoffs between efficient allocation of scarce goods and egalitarian allocation of those goods are ubiquitous in human affairs. But the application of that insight to society as a whole is bunk. Or, rather, it would be true if:

If those three things were true, then all economic inequalities would represent rewards for additional effort and rewarding additional effort would always be socially desirable. But none of those things is even approximately true.

Consider the case of the Milwaukee Bucks, the bad-at-basketball small market NBA franchise that recently sold for $550 million. The team's former owner was Herb Kohl. Kohl, in addition to having served a stint as a United States Senator, is rich primarily because he inherited the Kohl's chain from his dad. A lot of existing economic inequality represents this sort of thing — legacies passed down among families rather than allocation of talent to useful endeavors.

The team's most promising player is the rookie Giannis Antetokounmpo whose $1.8 million salary is low by NBA standards (he'll make more when he's not a rookie anymore) but already places him over 20 times higher than the American median household income and even higher than that relative to his native Greece. And good for him. At the same time, it's clearly false that just anyone could do this stuff if they worked hard enough at it:

Of course you can't play in the NBA without working hard. But a decent share of the large wages earned by NBA players reflect inborn physical attributes — height, most obviously, but also aspects of enduring and jumping ability — rather than behavioral responses to incentives.

On the last bullet, Wesley Edens and Marc Lasry, the team's new owners, are even richer than Kohl. And unlike him they seem to be overwhelmingly self-made men who've gotten rich by employing their apparently considerable skills in the hedge fund game. That's nice for them, but there's reason to believe society would be better off if smart, hard-working people were less likely to apply their talents to finance and more likely to go into teaching and research.

Inequality in the real world

Some of that is doubtless coincidence. But there is also no doubt that inequality in the provision of opportunities can itself be massively inefficient. A society in which some large segment of the population is locked out of the chance for childhood healthcare and nutrition, schooling, geographic mobility, or the chance to adopt a new profession is going to be both inegalitarian and inefficient. At the same time, recent research from the International Monetary Fund finds no observed tradeoff between redistributive economic institutions and economic growth. Of course one clearly could design redistributive institutions that had crippling impacts on growth, but it is hardly necessary to do so.

Indeed, because economic equality is a matter of money rather than of human welfare it is easy to see that inegalitarian distributions are themselves inefficient. A $10,000 a year raise that could be life-changing for a minimum wage worker would be utterly meaningless to a CEO already earning millions a year. 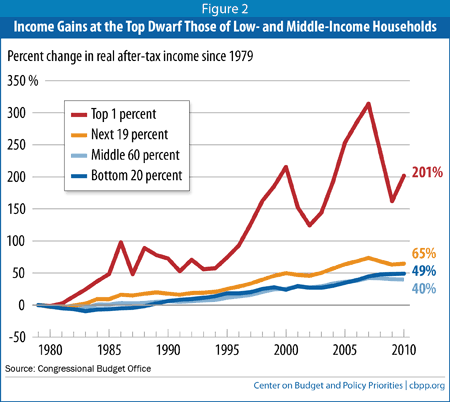 By the same token, the highly inegalitarian pattern of income gains seen in the United States over the past generation has been highly inefficient. Had typical households seen stronger income gains and rich ones weaker ones, the net impact on human welfare would have been strongly positive.

Even worse, the existence of an inefficiently inegalitarian distribution of money encourages a downward spiral of misallocation. In areas where equality norms really do impede efficient allocation of resources, equality normally triumphs because people feel it would be "unfair" to give an advantage to those with more money. If the distribution of money itself were more fair, this would be less of a concern and we could go about the business of distributing WWDC tickets and road space in an efficient market-based way.

The real appeal of economic inequality is, of course, to those who benefit from it. It would be convenient for them if that inequality was also beneficial for everyone else. But there's precious little evidence or compelling theory saying that it is.