Here's why your Facebook feed is full of marathon finish photos

Around 36,000 runners will line up at Hopkinton, Massachusetts, today to power (or slog) through the Boston Marathon's 26.2 miles. Those 30,000-odd runners are a part of a marathon craze that has taken hold in the US over the last four decades. 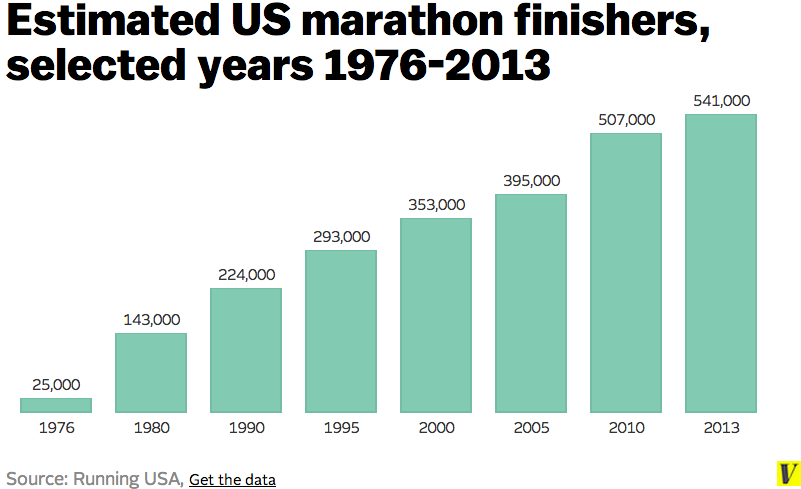 The above chart shows marathon finishers for selected years from 1976 through 2013, as estimated by Running USA, a nonprofit organization that promotes distance running. Not only has the number of finishers nearly quadrupled since 1980, but it has also grown by more than 20 times since 1976, from 25,000 runners in that year to 541,000 finishers in 2013.

What's behind that upswing? One factor is women. According to Running USA, women made up 11 percent of marathoners in 1980. As of 2013, it was 43 percent.

Another factor is that marathoning has come down to earth a bit. Times have slowed down considerably over the years, suggesting that many of the new runners are also slower runners. The median marathon finishing time for women in 1980 was 4:03:34, around 9:18 per mile. As of 2013, it was 4:41:38, around 10:45 per mile. Men's median times have climbed by a similar interval, from 3:32:17 in 1980 to 4:16:24 in 2013. This has created something of a rift in the running community between the racers and the growing ranks of "plodders."

In Boston, the ranks of the racers are perhaps stronger than at any other US marathon. Of the more than 1,100 marathons in the US in 2013 (another new record), Boston had the fastest median time in 2013, at 3 hours, 31 minutes (around 8:00 per mile), according to Running USA.

Updated April 21, 2013: This post was updated to clarify that the chart data point to single-year marathon finisher totals.