The start of a new school year means that confusing math problems linked to the Common Core are circulating again on Facebook and blogs. The conservative Heritage Foundation picked out the latest example, originally from RedState.com editor Erick Erickson: a textbook that uses six steps to explain how to subtract two numbers.

This math is frustrating to parents and to some students — with good reason. Elementary school math has become more complicated since the introduction of the Common Core state standards, which require that elementary school kids not just know how to subtract, multiply and divide, but understand what they're doing and why.

Common Core still requires students to learn and understand the standard algorithm, the techniques for adding, multiplying, and dividing that generations of schoolkids have learned. (Erickson says the standard algorithm is derogatorily called the "granny method," but if so, that term is not widely used in math education or textbooks.) But it also requires them to understand other methods, and those methods can make easy math look more difficult.

How Common Core math is different

Arithmetic has usually been taught like it's a recipe: Take the raw ingredients (the numbers), follow a series of steps, and end up with a result (the answer). While an experienced baker knows why you cream butter and sugar before adding eggs, then add flour last, a beginner just following the steps is in the dark. They might know what to do, but they can't explain why.

In the past, "students had this sense that math was some kind of magical black box," says Dan Meyer, a former high school math teacher studying math education at Stanford University. "That wasn't good enough."

One goal of the Common Core math standards is to make American students better at applying math in real life — a skill that's crucial for science and technology jobs, but one at which American students are particularly weak compared with peers around the world.

The theory is that if students understand why they do math the way they do, they'll be able to apply their skills more flexibly.

Do you have number sense?

Number sense means that you have a sense of how and why the tricks you call "math" work.

That seems abstruse and philosophical, but it's really not. You'd probably be flummoxed if someone ambushed you right after you finished a meal to demand that you multiply two decimals in your head — say, 18.5 x 0.2. That's a complicated arithmetic problem on a full stomach.

But this happens frequently in real life, where it looks like this: Your lunch cost $18.50. You want to tip 20 percent.

Can you teach number sense?

The Common Core standards aim to impart number sense. Although the standards don't tell teachers how to to teach or what materials to use, they say that students need to understand how to solve problems and why those methods work.

The underlying lesson: "Numbers aren't these brittle, fragile things that break," Meyer says. "They can play with them in fun, flexible ways."

Students will still learn what's known as the standard algorithm, the way that their parents learned to multiply, divide, add, and subtract. But they'll also learn other methods that try to make the underpinnings of the standard method more obvious.

One example is subtraction with a number line. This went viral this spring after a father posted his child's confusing homework assignment with his critique: 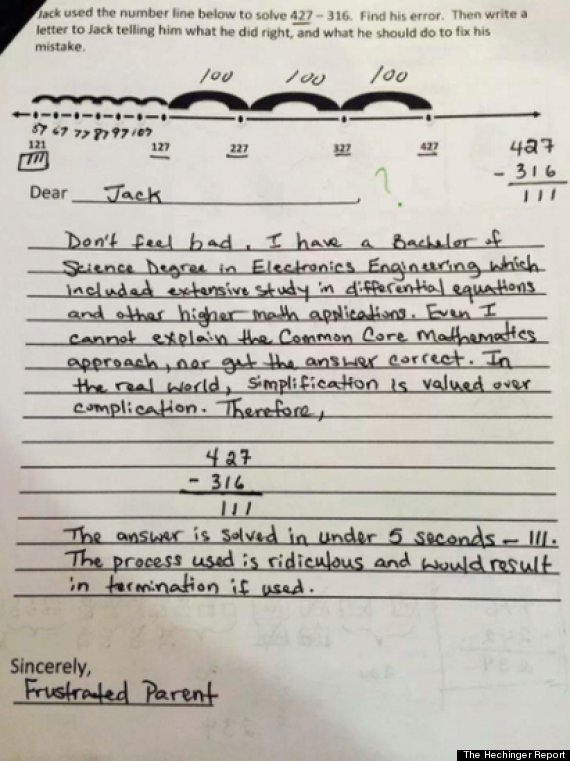 The idea behind using a number line for subtraction is that students get a visual representation of what subtraction is: figuring out the "distance" between two numbers.

Here's what a clearer version of the problem above would look like: Students put the two numbers at opposite ends of the number line.

Then they add the steps together: 4 + 100 + 7 = a distance of 111. LearnZillion, a company that creates lesson plans for teaching to the Common Core standards, has a 5-minute video explaining this technique. Here's what it's supposed to look like on another sample problem: 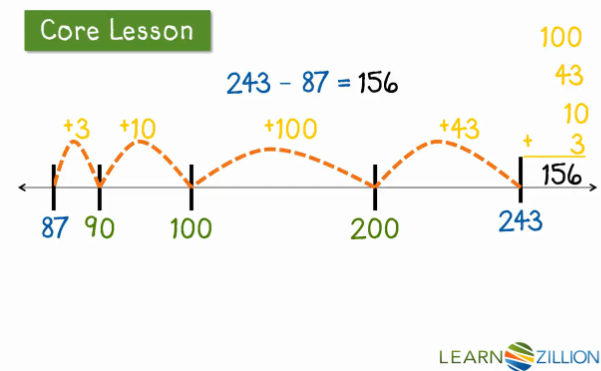 Multiplication, too, is explained visually. Most people learned to multiply two-digit numbers like this:

What's really happening there: 16 is broken down into (10 + 6). Then the multiplication is done in two parts (27 x 6) and (27 x 10) and the answers are added together. But most students see math as a series of steps or even tricks — line up the numbers, write a zero on the second line — without a rationale, says Diane Briars, president of the National Council of Teachers of Mathematics, which helped to write the math standards.

One way to explain the rationale, according to Common Core standards, is an "area model." Here's an explanation from the tutors at Khan Academy using the same problem:

Still, few adults would sit down to draw an area model or number line to do a math problem. (Most wouldn't do it by hand.) Students are still expected to learn the standard approach, which is indisputably faster. But the emphasis is switching from speed to understanding.

"Students should be able to understand any of these approaches," said Morgan Polikoff, an assistant professor of education at the University of Southern California who is studying how the Common Core is implemented in the classroom. "It doesn't mandate that they necessarily do one or the other."

Parents should brace for frustration

Other nations whose students have stronger math skills focus their education on problem-solving and understanding underlying concepts. But there might be other factors in play; research found a popular American math textbook is more challenging than South Korea's textbook, but South Korean kids still are much better at math.

A key question is whether elementary school teachers can learn to teach the conceptual side of math effectively. If not, number lines and area models will just become another recipe, steps to memorize in order to get an answer, Polikoff says.

Much of this is bound to confuse parents. When parents see their kids frustrated by math homework, their first reaction is to step in and help. It's natural for them to teach the step-by-step way that they learned to solve problems.

"What we want to tell parents to do is they don't need to teach the math," says Briars, the president of the National Council of Teachers of Mathematics. "What they need to help their children do is figure out, What is the problem asking you?" 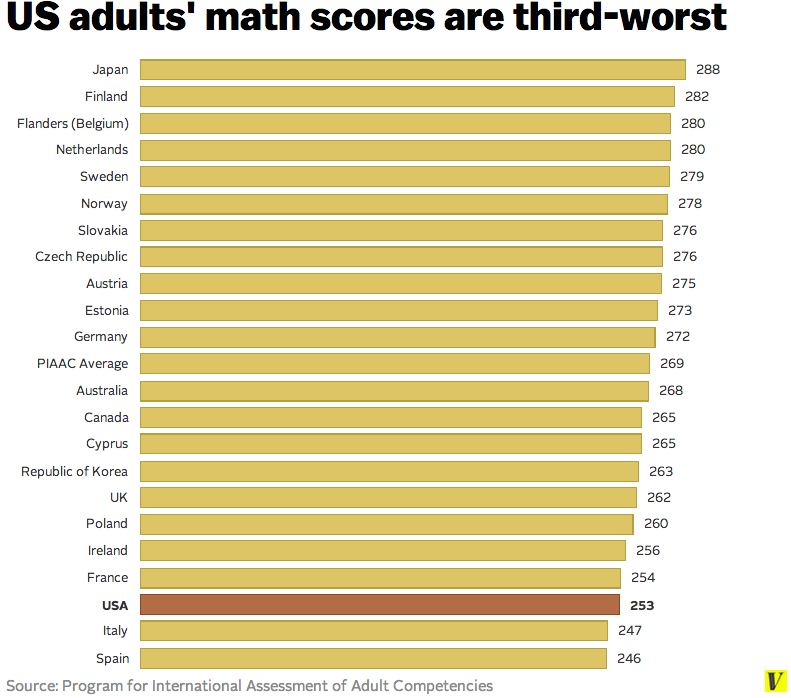 It's reasonable that parents will be confused by the new way of doing things, says Meyer, the former math teacher and Ph.D. student. But he says that parents' education wasn't particularly effective, even if they're confident in their arithmetic. When tested on their math skills, American adults ranked third-to-last compared to other developed countries.

"They grew up thinking math was a series of tricks to be memorized and reproduced," Meyer says. "None of us really enjoyed that."