Share All sharing options for: That time the Clinton White House discovered that Republicans surf the internet

On Friday, Bill Clinton's presidential library released a new batch of White House documents from Clinton's terms in office. Most of it was fairly anodyne inter-office exchanges, but there were a few tidbits that were more interesting:

After the 1993 suicide of deputy White House counsel Vince Foster, baseless rumors circulated that he had been murdered and that the Clintons were somehow involved. An undated White House Counsel's office memo tries to describe and analyze the "right-wing conspiracy industry" that pushed these rumors. Here's their analysis: 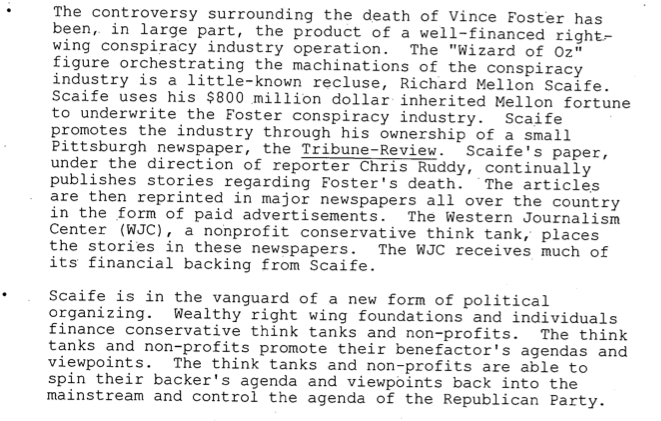 That memo's author is amusingly wide-eyed and suspicious about the internet, writing: "Evidence exists that Republican staffers surf the internet, interacting with extremists in order to exchange ideas and information." (Hat tip: Garance Franke-Ruta)

Another interesting tidbit: Erskine Bowles was later the co-chair of President Obama's commission on entitlements and deficit reduction. But, during the Clinton era, Bowles was completely opposed to such a bipartisan commission, as Sam Stein noticed. He thought it "might allow Republican extremists too much influence, and could undermine our efforts."

Finally, though Clinton's health reform plan never passed Congress, there were many similarities between his and Obama's efforts. Shortly before the plan failed, Clinton observed the political dynamic: "A lot of them want to know they can keep their own plan if they like it." (Hat tip: Brianna Keilar) 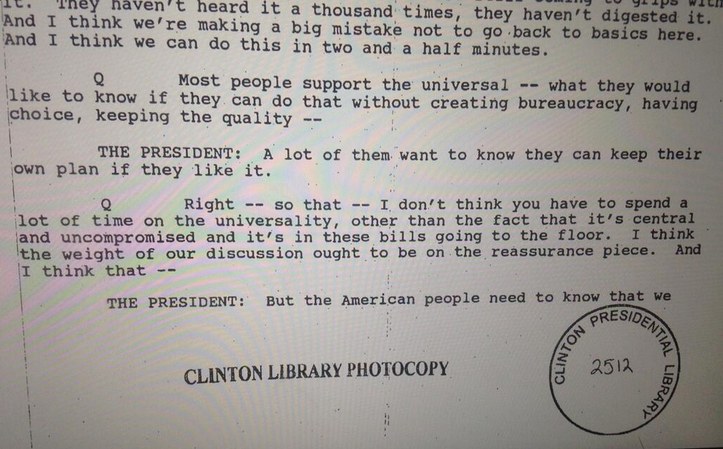 This, of course, became a ubiquitous Obama talking point during the health reform effort, which later got him into trouble when insurers began canceling plans.