Domestic violence has been dropping for 20 years. Here's how to keep that going.

Share All sharing options for: Domestic violence has been dropping for 20 years. Here's how to keep that going.

Yesterday, the Bureau of Justice Statistics put out a new analysis of domestic violence over the past decade (from 2003 to 2012). The numbers look good. Very good. Domestic violence hasn't continued to drop at the rate it did in the 1990s, but it's stayed low.

Even the recession, which early reports suggested was driving a rise in domestic violence as families felt under stress, didn't have much of an effect. And while "serious violent victimization" — that's rapes, sexual assaults, robberies, and aggravated assaults — saw a spike in 2006, serious domestic violence didn't. 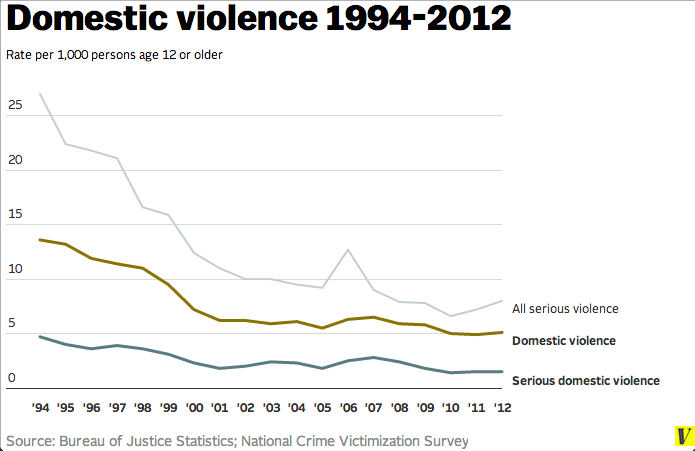 But advocates, looking at a different set of numbers, are seeing a growing problem: a persistent gap in support for survivors of domestic violence. That means that as well as things are going, we're not doing as much as we could.

The rise of the "support gap" for survivors

Domestic violence dropped in the '90s after the issue rose to national attention. Government started putting money toward law enforcement outreach and survivor support through the Violence Against Women Act and other programs, while general public awareness meant that survivors were more likely to know they could find help. But while more public awareness means that Americans are less likely to be victims of domestic violence, it also means that victims are more likely to seek out support services. "As police response improves, as prosecution and court response improves, as medical response improves, referrals to domestic violence programs go up," says Monica McLaughlin of the National Network to End Domestic Violence.

WHEN VICTIMIZATION GOES DOWN, REQUESTS FOR SUPPORT SERVICES GO UP

While the recession hasn't had much impact on rates of domestic violence, it has had an impact on how many survivors seek out services. And McLaughlin says that even though economic vulnerability won't turn a non-abusive family into an abusive one, it can exacerbate abusive relationships: "poverty is a co-conspirator of an abuser," she says. But federal funding for shelters and other services has remained more or less flat. The result: a gap between requests for services and the ability to provide them, which has remained persistent throughout the recession.

"Those numbers are stubborn. They're not moving," McLaughlin says. She suggests that federal funding would need to "increase significantly" to address the support gap. Whether or not that happens, one thing is clear: the progress the United States has made against domestic violence over the past twenty years is real and durable. But while survivors can now feel more confident that they will be listened to and can get help, another type of public awareness is needed to insure that the help they expect to see is really there for them.