Vinyl's great, but it's not better than CDs

Share All sharing options for: Vinyl's great, but it's not better than CDs

Happy Record Store Day! There are plenty of business-related grievances to be filed against the annual vinyl celebration, but it's hard to argue with the spirit of a day encouraging people to explore and buy new music. Moreover, vinyl's just more fun as a format than MP3s or CDs; there's something viscerally satisfying about dropping the needle, and physically spinning the record back to rewind. And in a world where people feel all too welcome to hijack the playlist at parties they attend, it's nice to have a harder-to-commandeer format on offer.

Let's not fool ourselves, though. Vinyl is great, but the idea that its sound quality is superior to that of uncompressed digital recordings is preposterous. They sound different, and that's exactly the point.

What vinyl can't do

A nice explanation of some of the challenges of mastering vinyl.

On a theoretical level, there's just no reason it should be the case that vinyl sounds better. There are built-in problems with using vinyl as a data encoding mechanisms that have no CD equivalent. Vinyl is physically limited by the fact that records have to be capable of being played without skipping or causing distortion. That both limits the dynamic range — the difference between the loudest and softest note — and the range of pitches (or "frequencies") you can hear.

If notes get too low in pitch, that means less audio can fit in a given amount of vinyl. If notes are too high, the stylus has difficulty tracking them, causing distortion. So engineers mastering for vinyl often cut back on extreme high or low ends, using a variety of methods, all of which alter the music.

For example, one common cause of high pitches in recordings is "sibilance," or the hiss-y sound produced by pronouncing certain consonants, notably "s" or "z"s, in a quick, sharp way (ex.: "zip," "shack," "sap"). This creates enough problems for engineers working in vinyl that they often have to "de-ess" recordings, either by making the pronunciation less sibilant through editing or by straight-up asking vocalists to pronounce lyrics differently.

De-essing is a common technique outside vinyl too, but then it's an artistic choice; vinyl forces de-essing upon you. If you want to keep aggressive sibilance in for aesthetic reasons, and want to press to vinyl, you're out of luck. And when de-essing is achieved through re-recording vocals, it can alter the music in subtler ways, making vocalists deliver lyrics less intensely and lose a degree of artistic expression in the process.

What CDs can do 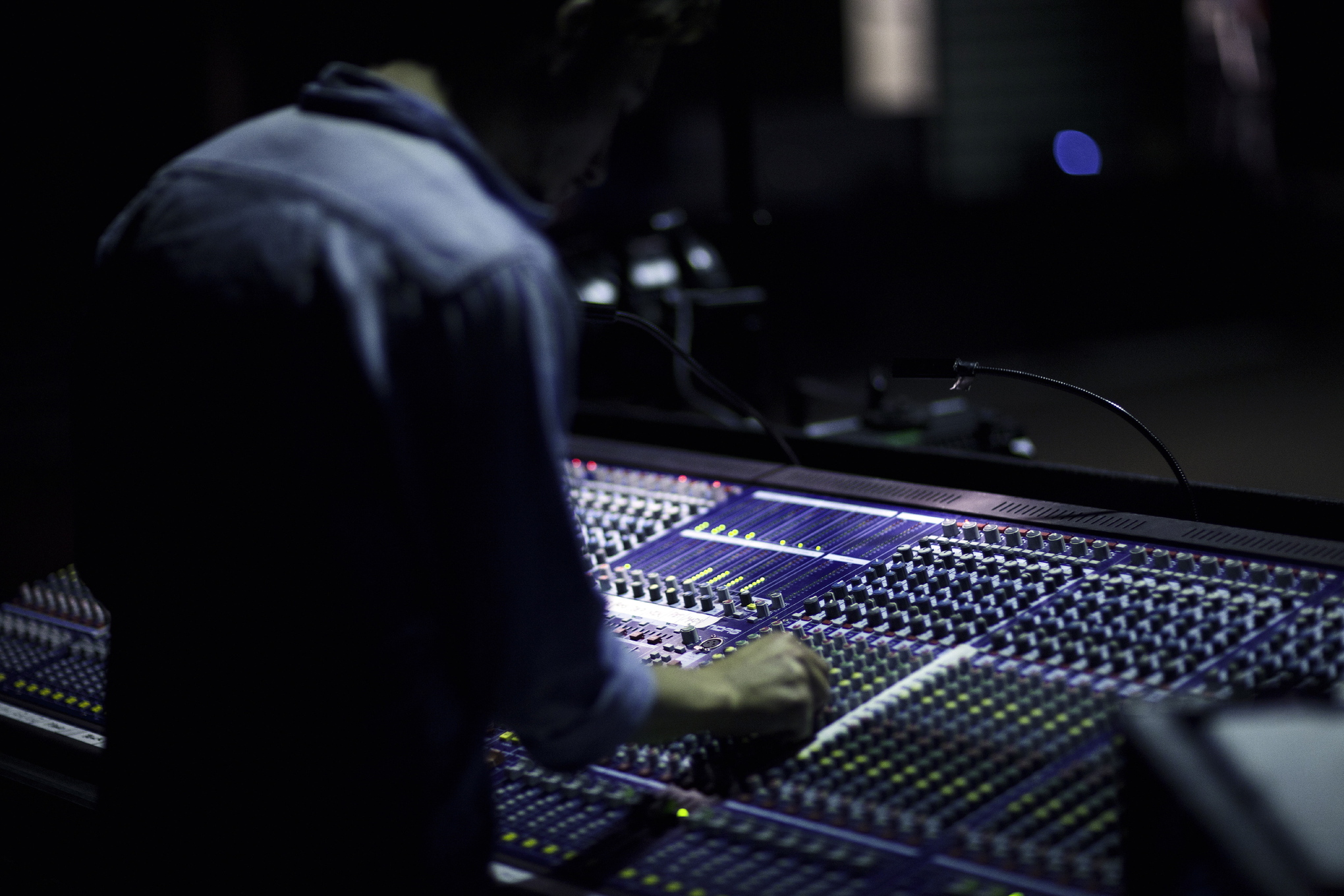 Sound engineer mixing the audio behind the audio console. Denmark 2011. Photo by PYMCA/UIG via Getty Images.

Since CDs rely on sampling an original analog signal being recorded, they do have some frequency limitations. While vinyl records, in theory, directly encode a smooth audio wave, CDs sample that audio wave at various points and then collate those samples. "No matter how high a sampling rate is," Wired's Eliot Van Buskirk once wrote, "it can never contain all of the data present in an analog groove."

That's true. CDs work by taking a bunch of samples from a source audio wave and stringing them together. But this criticism is misleading on two counts. For one thing, vinyl pressing is not error-free, and the analog groove of a given record is not a precise replication of the audio wave recorded in the master, not least due to extreme high and low frequency limitations. It's true that CDs can't exactly replicate the whole audio wave in a master, in every case (update: in many cases, the Nyquist-Shannon theorem means it can) — but neither can vinyl records.

More importantly, the volume of sampling that CDs do should be enough to get a replica of the original recording that sounds identical to the human ear. The sampling rate for CDs is 44.1kHz, meaning that CD recordings sample the master recording 44,100 times a second, and can capture frequencies as high as 20 kHz. That is about the limit of what humans can hear; at least one experiment has confirmed that listeners in blind tests can't tell the difference between recordings that include frequencies above 21k and ones that don't. You may think you can hear more than CDs are giving you. But you probably can't.

And over time, engineers have come to make better use of those 44.1kHz. Scott Metcalfe, director of recording arts and sciences at Johns Hopkins's Peabody Institute, explains that engineers have taken to "oversampling," making digital files that use a much higher rate than 44.1kHz, and then compressing that back down to 44.1kHz for the actual CD. "It captures the signal at a much much higher sample rate and then mathematically takes it down to 44.1kHz," Metcalfe says. "It does a really good job of preserving information."

Metcalfe brings up another problem with this line of CD criticism. Even if an actual recording method can hold frequencies above 20kHz, that doesn't matter if there isn't a microphone capable of capturing them in the first place, or a speaker capable of playing them back. And most studios don't have microphones that record above 20kHz, and it's very rare for speakers to play frequencies above that. Indeed, most playback systems feature low-pass filters, which specifically cut off anything above that marker.

The fact of the matter is that CDs can create closer facsimiles than vinyl can.

What do people actually prefer?

There is, sadly, no Pepsi challenge for CDs and vinyl. Image courtesy of Pepsi.

Simply as a matter revealed preferences, the fact that Americans buy digital copies of songs at a much greater rate than alternatives suggests that they'd rather listen to digital music or CDs than vinyl. Taking both actual albums and track sales into account, the equivalent of 243.5 million digital albums were sold last year, compared to 165.4 million CDs and 6.1 million vinyl records. Given that compressed digital audio is considerably lower in quality than either CDs or vinyl, consumer certainly seem to care a lot less about audio quality than convenience.

But that's kind of an unfair comparison, given exactly that convenience differential. You can't fit thousands of tracks' worth of vinyl in your pocket and listen to it while jogging. So what happens if you set all else equal, and have people compare digital and analog audio in a controlled setting?

Unfortunately, no one appears to have done a double blind listener test comparing vinyl to CDs, but there is a good study from Florida State's John Geringer and Patrick Dunnigan doing that with CDs and high-quality cassette recordings. While cassettes sold to consumers often featured lower audio quality than vinyl records, there's nothing inherent to magnetic tape requiring that, and the format doesn't suffer from the frequency limits imposed by the risk of vinyl skipping. It's not a perfect test for our purposes, but knowing how people feel about high-quality analog stacked up to high-quality digital should tell us something about comparing vinyl to CDs.

Geringer and Dunnigan used identical microphone and mixing board setups to record four different concerts, each time using both a digital record and a high-quality analog cassette recorder (the MR-3 from audiophile favorite brand Nakamichi). They then had 40 music majors listen to the recordings, either with loudspeakers or headphones, while letting them switch between each recording at will. The test subjects were not aware of which was the digital recording, and which was the analog one. They were then asked to record their preferences.

It turns out that the music majors had a significant preferences for digital. "Participants gave significantly higher ratings to the digital presentations in bass, treble, and overall quality," Geringer and Dunnigan write. The results were weaker on some points than others (recordings of string orchestras were a particularly close call) but in no case was the average rating of the analog version higher than the average rating of the digital one. The most analog-generous thing to be taken away from the study is that there are some types of music for which people have no preference. But there were several where people had a real, noticeable preference for digital.

So why do people love vinyl? 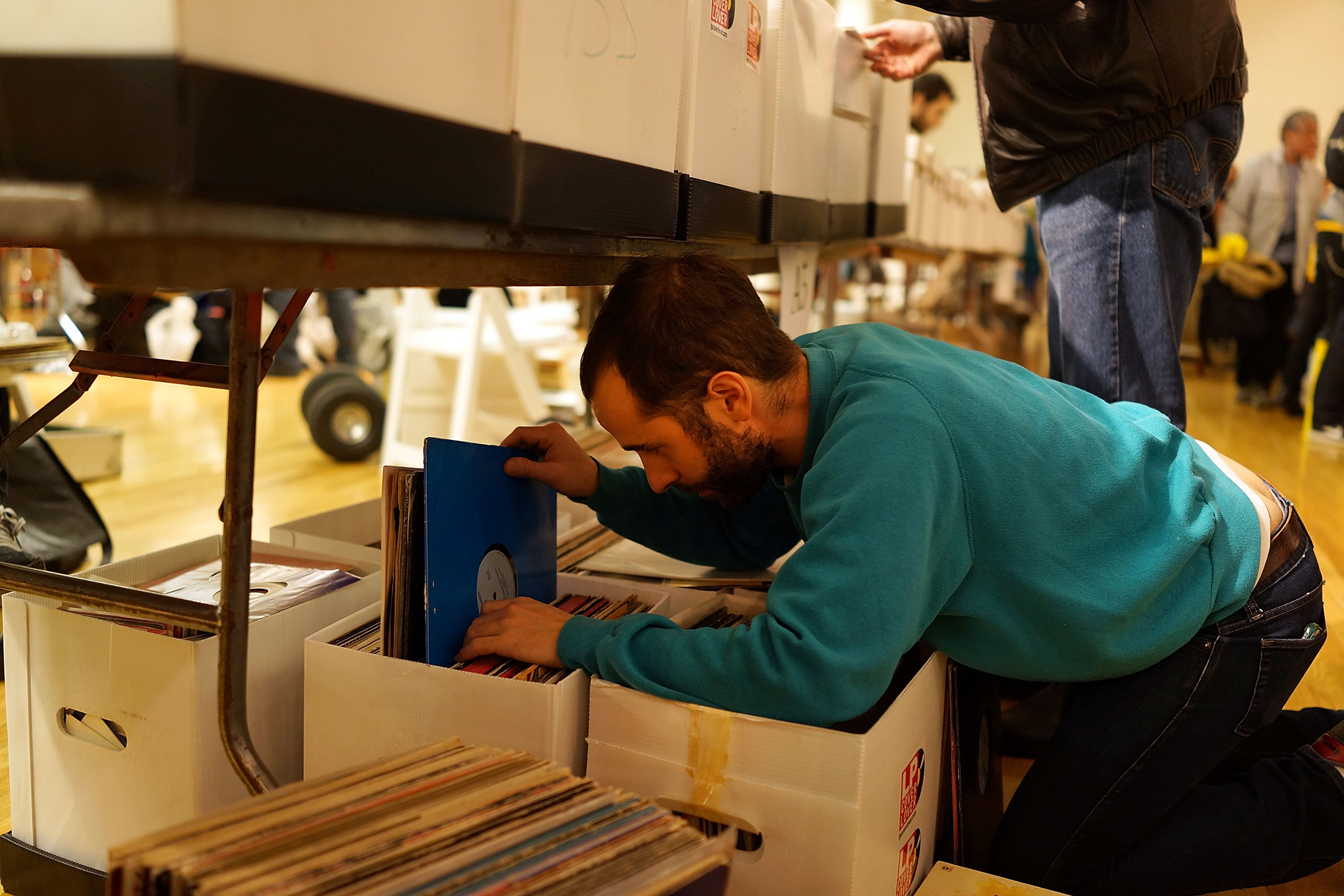 Record enthusiasts rapidly search through boxes of vinyl records on the opening day of the annual WFMU's Record Fair, which benefits that noncommercial radio station based in Jersey City, on November 22, 2013 in New York City. Photo by Spencer Platt/Getty Images.

Perhaps the best audio-based case for vinyl is actually precisely the fact that it does mess up the original recording. A lot of vinyl fans talk about the "warmth" of records, particularly of the low-end. But, as Pitchfork's Mark Richardson puts it, "the 'warmth' that many people associate with LPs can generally be described as a bass sound that is less accurate." The difficulty of accurately translating bass lines to vinyl without making grooves too big means that engineers have to do a lot of processing to get it to work, which changes the tone of the bass in a way that, apparently, many people find aesthetically pleasing.

"Warmth" also comes from flaws in record players. As the University of Waterloo's Stanley Lipshitz once explained to Popular Science, speaker sound and the needle's height fluctuations can cause the record to vibrate, which the needle in turn picks up and translates into a "warmer" seeming sound.

Is it wrong to prefer that "warmer" sound? Of course not! It would be as preposterous to rule that out as a legitimate source of aesthetic appreciation as it would be to discount distorted guitar lines for being "less faithful" to the original guitar sound. Audio distortion can be beautiful and there's nothing wrong with liking it. But there's also something to be said for listening to music as its creators meant it to be heard, and precisely because of their "warmth" vinyl recordings sound rather different from what artists hear in the studio.

"As a recording engineer, when I go to a digital recording, what I did is exactly what I get back," Metcalfe explains. "When you record in the analog domain, what you're hearing there is different from what you sent in."

Should I stop listening to vinyl?

Jack Black has strong opinions on the virtues of vinyl. Clip from Touchstone Pictures.

No! For heaven's sake, no. Each format has its charms, and their overall differences in quality are often overwhelmed by differences in the quality of initial recording equipment, in mastering approaches, and in playback setup. But if you're a vinyl collector, you also shouldn't go around telling your friends how much purer your audio is. First off, that's generally dickish behavior, but more to the point it's false. Digital recording just is more accurate. That's not the only thing worth considering by any means, but it does make the puritanism of some vinyl true believers look rather ridiculous.