Share All sharing options for: Google's chance of winning its patent fight with Apple just improved a lot

News that a judge has granted Google's request to litigate a patent case in California rather than Texas might seem like a small story, but it could have big implications. Google is being sued by the Rockstar Consortium, an "intellectual property licensing company" — many would call it a patent troll — whose members are Apple, Microsoft, and other Google rivals.

Rockstar is located Plano Texas, which is in the Eastern District of Texas, the nation's most patent-friendly jurisdiction. Rockstar filed a lawsuit against several Android vendors there last year. Google responded by suing Rockstar in California, seeking a declaration that Android does not infringe the consortium's patents.

Rockstar asked for the California case to be moved to Texas. On Thursday, the judge said no. So unless Google gets the Texas case moved to California, there will be two parallel lawsuits working their way through the court system

Why are the companies fighting so hard over the location of the case? Here's why: 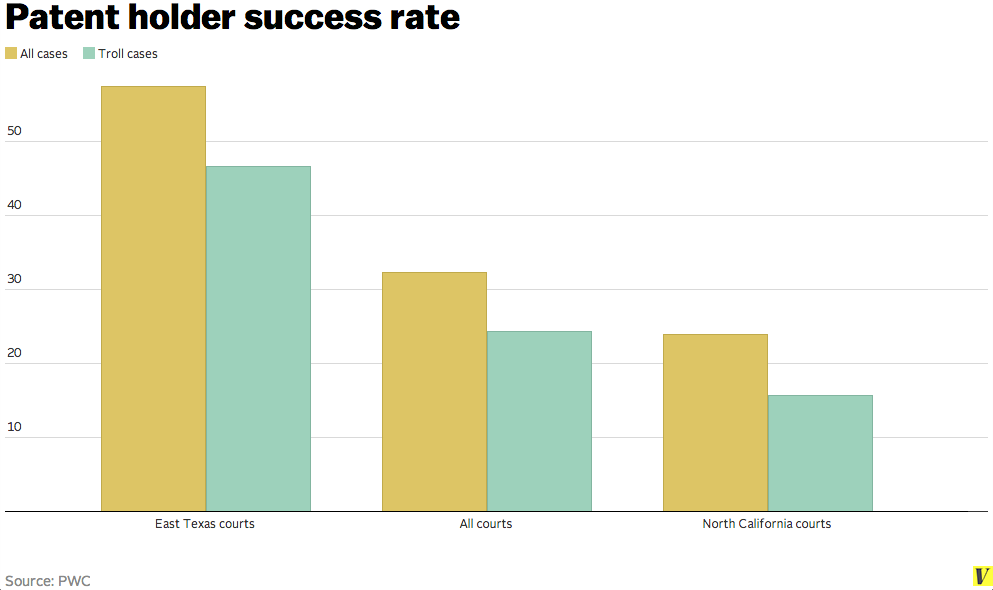 This chart is based on data collected by PWC for 2012 cases. It shows the Eastern District of Texas sides with plaintiffs 57 percent of the time. Trolls like Rockstar ("non-practicing entities" that make all their money from patent licensing and litigation) won 47 percent of the time in East Texas in 2012. Those figures are well above the national average.

The Northern District of California is a lot more friendly to defendants. Plaintiffs there only won 24 percent of cases in 2012. And trolls did even worse, winning just 19 percent of the time. No wonder Google wants to fight Rockstar on its home turf.