Share All sharing options for: Chelsea Clinton is a very typical pregnant woman

Chelsea Clinton announced that she's pregnant yesterday. As a woman with two master's degrees, she's part of a larger trend in America right now: a record share of new moms are college-educated or more. Here's a graph from a 2013 Pew report showing the rise of the highly educated mother: 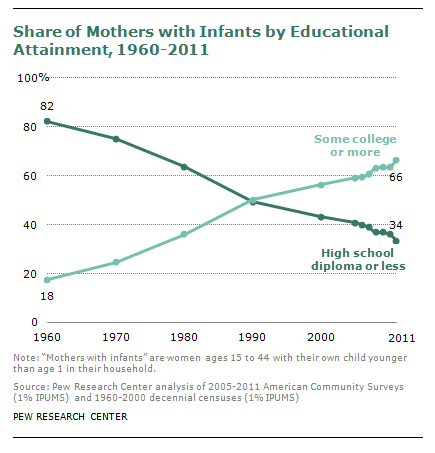 As you can see, about two-thirds of new mothers in 2011 had at least some college education, while about a third had a high-school diploma or less. According to the Pew report:

These benchmarks reflect a decades-long rise in the educational levels of all women, as well as a decline in births that has been particularly steep among less educated women, and that has intensified since the onset of the Great Recession in late 2007