One of the biggest changes for workers in America over the past 50 years is that unions have gone from dominant to dying. The percentage of Americans working in the private sector who are union members has fallen from 35 percent in the 1950s to 6.7 percent in 2013, according to data from Barry T. Hirsch, a well-known labor economist, and the Bureau of Labor Statistics.

Another change is that more Americans than ever work in professions with occupational licensing — state rules that say you have to meet certain qualifications, or pass an exam, before you can ply your trade. Barbers, for example, are generally now licensed in the United States, with the exact rules varying considerably from place to place.

That's where Alan Krueger, formerly President Barack Obama's top economic adviser, comes in with a fascinating idea: What if these two trends are related?

As American unions shrank, Krueger suggests in a paper with economist Morris Kleiner, occupational licensing expanded to fill the gap. Nearly 30 percent of workers are now licensed, as compared with less than 5 percent in the 1950s. 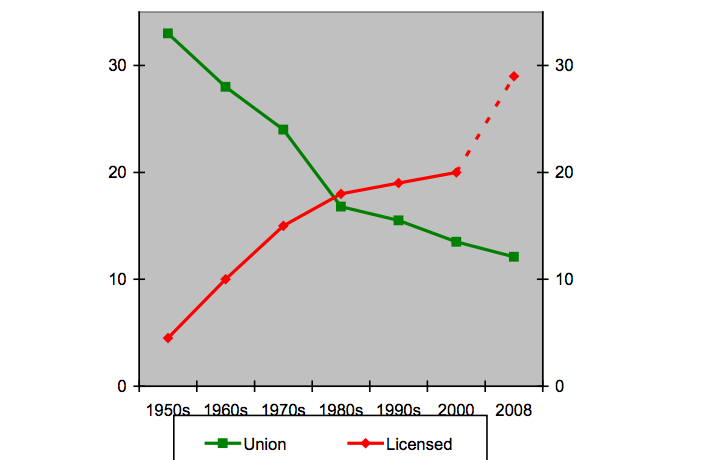 Connecting the stories of unions and licensing makes sense. Both are institutions workers created to raise wages — and occupational licensing seems about as effective as unions, raising wages by about 15 percent relative to what similarly skilled workers earn in states where they're not protected by licensing from competition.

Yet there's something unions did that occupational licensing doesn't, and that's reduce inequality, Kleiner and Krueger find. Whereas unions tend to push up wages at the bottom and restrain them at the top, compressing the wage distribution, there's no such effect for occupational licensing. Wage dispersion within a given trade is not effected by licensing.

In other words, the most successful workers will find that occupational licensing recreates the wage gains that unions once provided. But licensing seems to do little to help the bargaining power of the most vulnerable workers.