George W. Bush gets way better retirement benefits than you

Share All sharing options for: George W. Bush gets way better retirement benefits than you

As it turns out, ex-presidents don't have to write a best-selling memoir to earn a living. All four living former presidents received a pension of $201,700 in fiscal year 2014, according to a 2014 report from the Congressional Research Service. But that's just the beginning of the benefits ex-presidents receive.

Altogether, the General Services Administration, a government management agency, has allotted George W. Bush nearly $1.3 million in pension and allowance for FY 2014. That's the largest amount of the four ex-presidents. Bill Clinton is next, at $950,000. 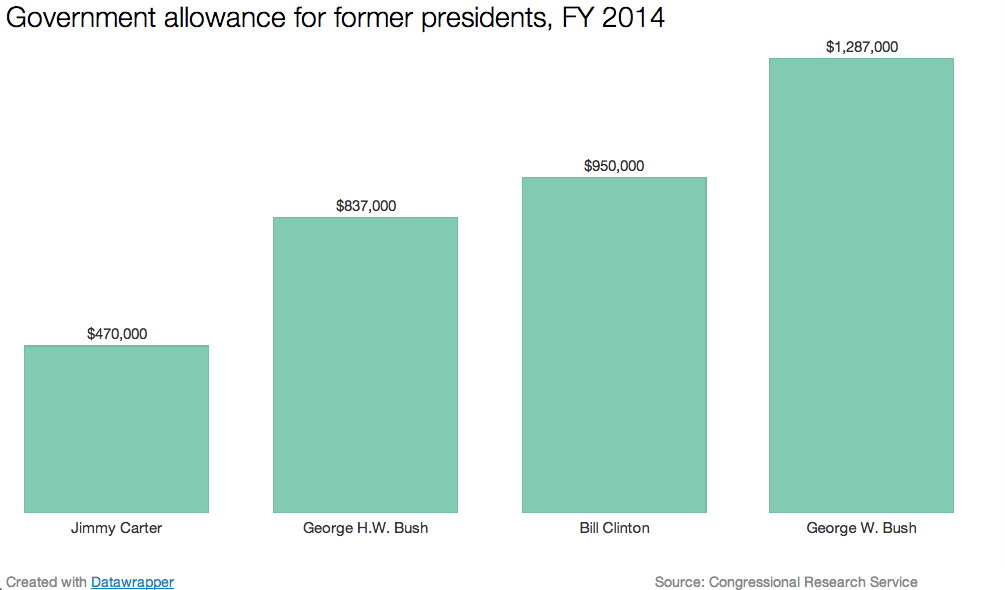 Presidents receive pensions and additional benefits thanks to the Former Presidents Act, which was passed in 1958 and spurred by President Harry Truman's financial difficulties after leaving office.

By law, former presidents today receive a pension at the pay level that current cabinet secretaries earn — $201,700 in 2014. The rest of the money comes from other expenses the law says the government should provide to presidents.

Those expenses are wide-ranging, covering personnel, office supplies, phone service, and "other services" — a category that includes cable TV and HVAC services. Altogether, nearly $3.6 million was allotted for former presidents in fiscal year 2014 (a total that doesn't include Secret Service protection, amounts for which are not disclosed). 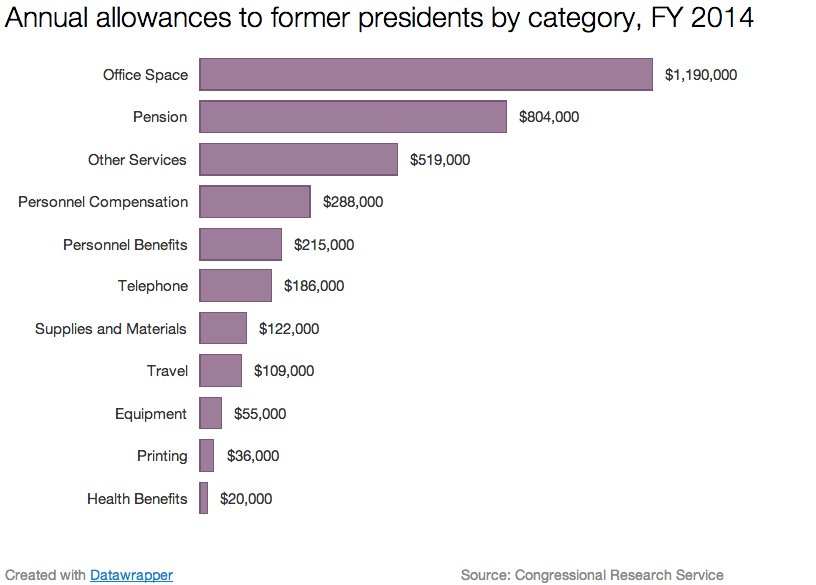 Office space makes up the largest share of what ex-presidents get from the government, and that is the area that most distances Clinton and George W. Bush from the other two presidents. Clinton's office space in 2014 cost just over $414,000, and Bush's cost $420,500 — not much less than the total GSA allotment for Carter.

Office size and location may be what boost Clinton and the younger Bush above and beyond their colleagues here — Clinton has an 8,300 square-foot office in New York City, and Bush has 8,200 square feet in Dallas, according to the report. Carter, meanwhile, has less than 7,100 square feet in Atlanta (costing a little over $109,000), and the elder Bush has a modest 5,379 feet in Houston (nearly $180,000).

One other area that separates the older from the newer ex-presidents is health care. Carter and H.W. Bush receive no federal health benefits through GSA, while Clinton is allotted $8,000 in FY 2014, and George W. $12,000. Carter does not qualify for the same health benefits as other presidents as he only served one four-year term, whereas most former federal employees must serve five years to receive benefits. Bush, meanwhile, served only one term but does qualify because he served in other positions, like Vice President. However, he has declined these health benefits.

carter does not qualify for the same health benefits as other former presidents because he only served one four-year term.

Do presidents really need all this financial help? Not everyone thinks so. Rep. Jason Chaffetz (R-Utah) has twice introduced the Presidential Allowance Modernization Act, which would cap a president's pension at $200,000, providing another $200,000 allowance for things like office space and staff. In addition, for any dollar a president earned beyond $400,000, $1 would be subtracted from that $400,000. Both times he has introduced the bill, in 2012 and 2013, it has been referred to committee and seen no further action.

Indeed, presidents can rake in the money through other routes. Clinton received a $15 million advance on his memoir, "My Life," and George W. Bush got a $7 million advance for his "Decision Points," according to the Christian Science Monitor. Speaking engagements can pile on even more. In 2013, CNN estimated that Clinton had brought in $106 million in this area since leaving the White House.

As for Nancy Reagan, the only living presidential widow, she is appropriated only $7,000 this year, for postage — incidentally, making her the only ex-White House resident who uses the postal privileges. It's not that the government is stiffing her; she is eligible for a $20,000 pension, which she has declined. Chaffetz's bill, if passed, would have increased the widow pension to $100,000 per year, even while it would shrink the benefits of former presidents.